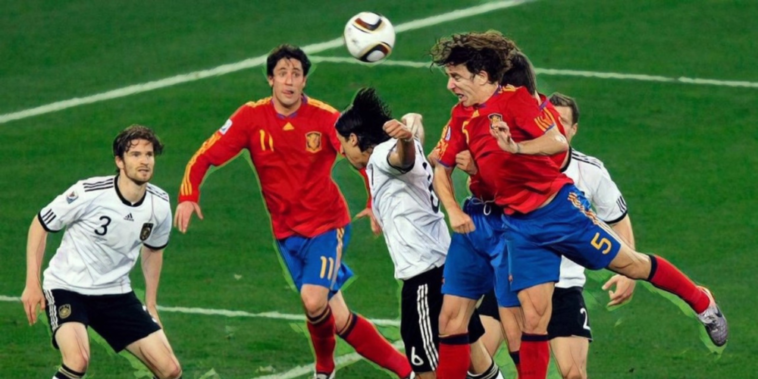 Headed efforts can be a spectacular goalscoring art form, a technique that requires desire, timing and often bravery to meet a crossed ball.

The FIFA World Cup has seen its fair share of memorable headed goals and with Qatar 2022 about to reach the business end, we’ve looked back at some of our favourites from past tournaments.

Here are five of the best headed goals in World Cup history.

Francois Oman-Biyik’s opening goal at Italia ’90 is one immortalised in the World Cup archives. Cameroon produced one of the tournament’s greatest shocks with an upset win over Argentina, with Oman-Biyik’s goal deciding the game against the reigning world champions.

As a set-piece was only half-cleared up into the air, the Cameroon forward set off in pursuit of the loose ball. Despite moving away from goal, he leapt ludicrously high into the air to nod down the dropping ball, with his effort squirming under Nery Pumpido for a famous winner.

His winner came just six minutes after Oman-Biyik’s brother, André Kana-Biyik, had been sent off for a foul on Claudio Caniggia, as Cameroon’s unheralded side took a sizeable scalp in the South American world champions.

There’s been better headed goals than Zinedine Zidane’s brace in the 1998 World Cup final, but few as iconic in the tournament’s history.

On home soil France became world champions for the first time, with a clinical performance putting four-time winners Brazil to the sword at the Stade de France.

Les Bleus’ talisman had been below his best in the early part of the tournament, but rose to the occasion with two expertly-taken headers, meeting corner kicks to immortalise his name in French sporting history.

Magnifique from the mesmeric Zizou.

Zinedine Zidane vs Brazil in the 1998 World Cup Final. (via @1904MB) pic.twitter.com/aBWImD8Xgk

Jared Borgetti scored goal after goal during a long career of penalty-box prowess, one which saw the Mexican score 46 goals for El Tri at international level.

The most famous of all came at the 2002 World Cup, where Borgetti bamboozled a star-studded Italy team with a moment of incredible improvisation.

Italy had reached the final of Euro 2000 two years earlier and were well-fancied to go deep into the tournament, but finished second in Group G after Borgetti’s brilliance earned Mexico a point in the final fixture.

"You don't see many headers like mine against Buffon." 🇲🇽

Not many better headers in #FIFAWorldCup history than @borgetti58.#KoreaJapan02 | @miseleccionmx

What followed was outstanding. Borgetti – well aware of his surroundings – contorted his neck to flick on the ball, guiding in perfectly past the motionless Gianluigi Buffon and into the far corner.

“I turned my neck as I headed the ball and that helped put a little spin on it and for it to curve a little,” Borgetti recalled to FIFA. “It made Buffon think the ball was going wide but that curve took it inside the post. It wasn’t the kind of header you expect either. You don’t see many like that.”

Spain’s success at the 2010 World Cup etched La Roja’s name into the history books, with a second successive major tournament win underlining their status as one of the great international sides.

Vincente del Bosque’s side were far from vintage in South Africa however, winning each of their knockout round games 1-0.

Their semi-final with Germany was a rematch of the 2008 European Championship final and required a set-piece to break the deadlock, as Carles Puyol powered home a winner in Durban.

The shaggy-haired centre-back showed brilliant determination to meet Xavi’s corner kick, starting his run from the edge of the area before heading home an unstoppable effort past Manuel Neuer.

Few can forget his flying volley for Arsenal at Charlton, or another fantastic first-time effort that helped wrap up the Premier League title for Manchester United in 2013.

At international level he scored a record-breaking 50 goals for the Netherlands, but few better than this sensational diving header at the 2014 World Cup. In a rematch of the 2010 final, the Dutch found themselves a goal down to the world champions in Brazil.

Enter Van Persie, who flung himself through the air to meet Daley Blind’s cross-field pass and head past Iker Casillas.

It was a magic moment from Van Persie that spawned countless internet memes and was a goal later nominated for FIFA’s Puskas Award. A shell-shocked Spain capitulated after the forward’s flying header levelled the scores, losing 5-1 in a stunning result.