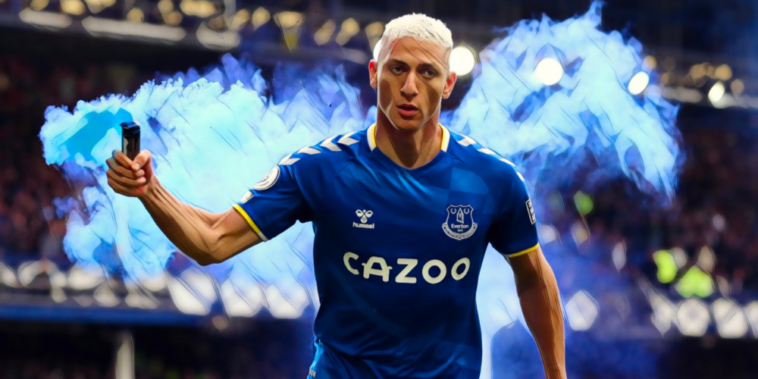 Last season, Richarlison de Andrade reached double figures for goals despite playing for a side that only narrowly avoided relegation. He also went to ground a lot, sometimes holding his face when a stray elbow brushed his shoulder or nursing a completely different leg to the one a defender’s bootlace had tickled. On occasion he would stay down for ages, necessitating Everton’s medical staff to come on and revive him, taking an eternity about it. It is not quite clear what purpose this serves.

Though his goal-scoring rate is perfectly commendable, and though the Brazilian consistently displayed a work ethic to be applauded he was also anonymous for a good part of last term, just like he was anonymous for a sizable chunk of 2020/21.

Anonymous? That feels harsh and maybe ‘ineffective’ is a more accurate term. The 25-year-old forward never fails to put in the yards, haring into the channels and chasing down full-backs who dare to take an extra touch. But still, with the ball at his feet too often a pass will go astray, with the player being on a different wavelength to a team-mate. Or a shot will fly high into the top tier of the Park End.

Excuses can be made for the boy from Nova Venecia, namely that too much expectation has been placed on his shoulders of late; that he is a significantly more productive talent when allied with an out-and-out centre-forward, except Dominic Calvert-Lewin was injured for essentially two-thirds of last season. To Richarlison’s credit, he accepted and even embraced the onus to offer Everton a threat up front on his lonesome. Last year he was involved in 35% of the Toffees’ goal involvements and took on 72 shots, considerably more than anyone else.

Even so, this is an attacker who is typically sensational for four or five games per year, thoroughly decent for another ten, and bang-average for the remainder of each campaign.

This is the kind of questionable output that Tottenham have invested up to £60m on this past week and inevitably a player who divides opinion has done so again, with some believing Spurs have over-paid for an erratic footballer who absolutely won’t be content sitting on the bench, understudying for Harry Kane and Son Heung-min. Yet he might have to and that bodes badly.

Others meanwhile insist it represents a good piece of business for the top four side because here is an attacker who has scored one in three for his club and finally Spurs have secured genuine strength in depth for an area they have for too long now overly relied on their devastating duo. In this regard, as with almost every transfer due to be concluded over the coming weeks, only time and games will reveal who is right and who is misguided.

It is telling however that some of the attacker’s biggest defenders emanate from Goodison, with his departure met with a deep despondency from Evertonians that equates to a collective form of grief and while this grief should of course be respected, it should also be taken lightly when assessing Richarlison’s merits.

The Brazilian was a cult idol at Goodison, adored for the manner in which he played with his heart on his sleeve and with fire in his belly. In this regard, throwing a flare in celebration and winding up Liverpool players in derbies matter as much as his actual application on the pitch.

This though won’t cut it in North London, or at least gaining another cult hero will be viewed merely as a bonus to the Spurs faithful. For they are in a position high in the league where they don’t require any consolation or solace from possessing a player who ‘gets’ their club; who struts and prowls like a warrior single-handedly fighting a cause, that cause being defiance against weekly struggle.

Come on your Spurs! 🤍@SpursOfficial pic.twitter.com/YT8B3qatNN

For some time now the forward has been a totem of pride for Everton fans and that is important for sure, but Tottenham fans would much prefer their new star to be consistently influential and impactful; to get close to Kane and Son’s levels; to score the goals and make the assists that keep Spurs above Arsenal and cemented in the Champions League places. Theatrics and badge-kissing come far behind and secondary to that all.

Whether Richarlison is capable of providing such consistency remains to be seen but certainly, hope lies in his new manager, who very much shares the player’s appreciation for the darker arts and is also known for throwing a wobbly or two. Should the pair strike up a good relationship Antonio Conte may indeed get the best out of his latest charge.

Again though, only time will tell, and that’s hardly surprising because when appraising Richarlison de Andrade as a whole we are led to a cornucopia of uncertainties and contradictions. He scores a fair whack of goals but not enough. He is passionate and volatile but rarely does this feel beneficial to the player or his club. His work ethic is exemplary but too often he fades to nothing.

Will the real Richarlison finally stand up at Spurs? He may once he’s finished rolling around in mock-agony on the turf from the slightest of touches.