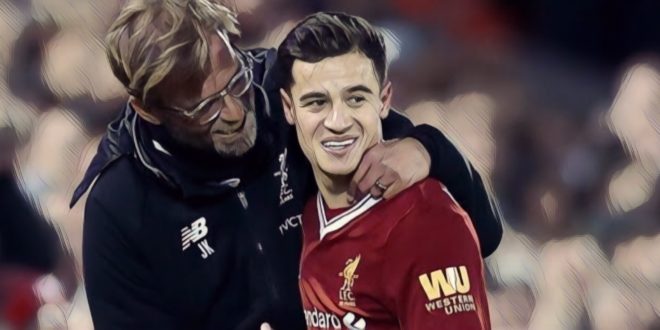 January 2018 must have had more than just a faint touch of Groundhog Day for Liverpool fans. As a new year was ushered in, the club finally put to bed two protracted transfer sagas.

Long-term defensive target Virgil van Dijk finally became a Liverpool player for a club record £75 million fee amid much fanfare and excitement. Such a stellar arrival took the sting out of the high profile and largely anticipated departure of Philippe Coutinho as Barcelona finally bagged their number one target, albeit for an eye-watering sum earlier that same month.

While many fans were relieved to see the conclusion of two very long-winded transfer sagas, there was still a tinge of that all too familiar frustration. Yes, they had signed a world-class defender who would go on to transform their entire side, but this had come after one of their star players had chosen to manufacture an Anfield exit and, on the surface of things, significantly weaken the side.

Coutinho’s departure looked to be keeping with Xabi Alonso, Xavier Mascherano, Luis Suarez and Raheem Sterling who all opted out and left to the extreme determent of the players left behind on Merseyside. Framed with this context, Liverpool fans could be forgiven for watching on with dread as their former favourite was announced at the Camp Nou.

And yet Coutinho’s dream move to Barcelona didn’t derail Jurgen Klopp’s train. Far from it. The majestic Brazilian was capable of breathtaking moments of undeniable quality but overall, he was not tailor-made for Klopp’s high pressing, ultra-committed style of play.

The German’s style demands that all players must engage and press at any given moment. Coutinho’s method was all about picking up the ball in that precious pocket of space in and around the edge of box and either unleashing a curling shot past a helpless keeper or laying on a beautiful one-two that left defences flat-footed and simply bewildered as he ghosted into an often crucial position in the area.

It would, however, be wrong to attempt to censor the Brazilian and try to produce a false narrative of complete incompatibility with Klopp’s mantra. The Brazil international was involved in 99 goals during his time at Liverpool and helped them regain their status as a Champions League club in 2016-17.

His link-up play with Mo Salah, Roberto Firmino and Sadio Mane was simply superb and led to Liverpool being the league’s great entertainers for a time. And yet it cannot be denied that the club, either through providence or genius design, underwent a stylistic revolution once their twinkle-toed number 10 left for Catalonia.

The high press remained, but it was more refined as Liverpool evolved into a side able to win games with more control and less chaos. There were still the ludicrously silly games of course, such as the Champions League bonanza of a semi-final with AS Roma that saw Liverpool win 7-6 on aggregate despite leading the tie 5-0 at one stage. See notes on the mighty Dejan Lovren for further explanations on this crazy anomaly.

Erratic Croatians aside though, Liverpool were thriving in attack without their Brazilian play-maker. The emergence of Alex Oxlade-Chamberlain, Naby Kieta and the ever-green talents of Roberto Firmino combined to negate the creative void left by Coutinho. 89 Premier League goals were scored in their first full season without Coutinho and a club record 97 points were chalked up during a historic campaign.

Furthermore, the added balance of Jordan Henderson, Gini Wijnaldum and Fabinho has helped Liverpool get a strangle-hold of matches and simply dominate their opponents with relentless pressing and hunting in packs to retrieve the ball and limit space on the pitch.

Champions League glory last season and a cavernous gap at the top of the Premier League table during this current record breaking campaign, only further highlight how Liverpool have finally managed to evade the destructive influence of losing a player and consequentially their entire upward momentum.

However, this current transfer saga has left its shadow despite its minimal impact. The Brazilian’s well documented struggles in La Liga and subsequent loan move to Bayern Munich has lead to wide-spread speculation about his long-term future.

In the Wild West corners of Twitter and the wider social media community, rumours have been rife that both club and player have, multiple times over the past twelve months sought an emotive reunion.

Such misty-eyed sentiment ignores the massive strides made over the past two years. It also turns a blind eye to a player who reportedly showed a poor attitude in training and missed the start of the 2017-18 season with a highly dubious back complaint after a summer move to Barcelona failed to materialize.

While it is important to remember and celebrate Coutinho; it is also crucial for Klopp to have loyal men at the club. The German is known to covet this from his players. The questionable injury complaints and poor behaviour of the 27-year-old will not have been lost or forgotten by the Liverpool manager.

As with all things in football it is crucial to keep all eyes focused on the future. Coutinho is 28-years-old in the summer and has already played a lot of football. The Brazilian himself recently intimated that he was on a different journey in his career now as he rightly moves on from his memorable time at Anfield.

Jurgen Klopp and Liverpool fans must now also move on and away from this saga. The rumour mill will, of course, never stop but neither should the Reds admirable progress and constant urge to unearth their next generation of talent. To revisit the past this summer and continue to pine for a player who left under a cloud would be the very opposite of the progress they have worked so hard to achieve since that eventual January transfer window of 2018.