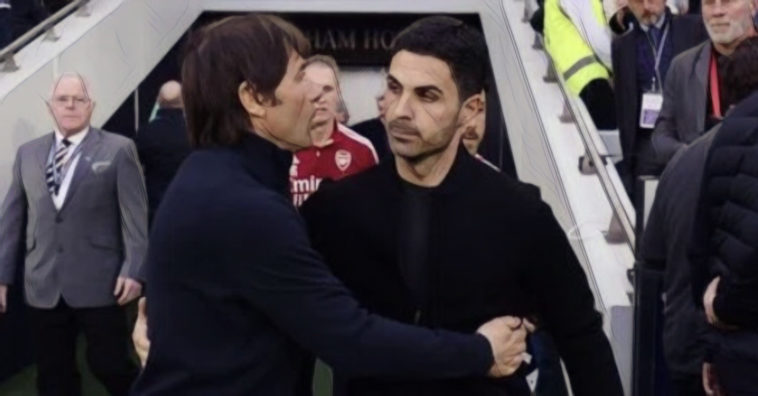 As Tottenham and Arsenal prepare for a final-day shoot-out to secure fourth spot it would be one hell of a hard sell to claim that Spurs have gone backwards in recent years.

Victory over relegated Norwich at Carrow Road on Sunday will put them behind only Manchester City, Liverpool and Chelsea in the reckoning of 2021/22 and common sense and every metric under the sun insists this was always realistically their best outcome. Furthermore, participation next term in the Champions League for only the sixth time in their history is unquestionably an achievement to be celebrated and it’s a feat made all the more impressive by wider context. Last season, this was a side made sterile by the vampiric management of Jose Mourinho and hugely hampered by stadium debt, Spurs appeared to be drifting to troubled waters. Last summer, they came within a hair’s breadth of selling, against their will, their finest talent and talisman.

Finishing top four therefore, will represent real progress, a rebuild if you like on what was constructed during the Pochettino era. It will be a statement of intent worthy of acclaim.

So why is it that, should they beat the Canaries on Sunday, and should the players and Antonio Conte rejoice on the Carrow Road pitch, a nation will roll its eyes at the hugging and high-fives? Why will the euphoria leave a sour taste in the mouths of many?

To explain this largely excuses Tottenham, for they are merely an accessory after the fact. From their perspective, they have done the very most they are capable of across a long and arduous campaign, and it means they will play Europe’s elite in the coming months, furnished with considerable pulling power in the transfer market to boot. Their celebrations will be justified.

Yet increasingly we find the securement of top four regarded as a significant accomplishment and increasingly it annoys as it becomes the norm. First, we eulogize over the title winners and then we stand and applaud the teams that came runner-up, third and fourth, as if they have achieved something of note. It is the side that finishes fifth who are damned as failures. To only qualify for the Europa? Ha, mugs.

Whereas in reality – away from the hyperbolic propaganda that relentless informs us, both insidiously and also slap, bang across the face that the Champions League is the be all and end all; and away from our need to create an additional narrative to keep us entertained, because we all knew that City and Liverpool were the only viable contenders for the title from day one – when we step back from all this we see things for how they truly are. That the race for top four consists of bald men fighting over a comb. That, given the enormous resources of Chelsea, Arsenal, Tottenham and Manchester United, whoever wins out amounts to a giant, patting their belly smugly for discovering some stale crumbs of comfort.

Which brings us to the Gunners, who have epitomised and embraced this hollow quest more than most in recent times: who have become most associated with taking enormous satisfaction from winning the Qualifying-For-The-Champions-League Cup.

This incidentally is quite ironic, considering that if they don’t pull off a miracle this weekend it will be the sixth consecutive season they have failed to attain a top four finish, and how pathetic is that when viewed through their own perception of what success looks like. They can’t even secure the consolation prize anymore; the consolation prize they used to talk up as meaningful.

Prior to these fallow seasons Arsenal finished either third or fourth for a remarkable ten years in succession and if it can’t truthfully be said that Tottenham’s eternal pursuit of a top four finish signifies any regression on their part – because history tells us this is where they are pitched in the great scheme of things, with just a trio of top three finishes in the Premier League era – the same absolutely cannot be said of their North London neighbours. Arsenal used to be great. A behemoth. A consistent title winner or title contender. They are a club that has taken a massive backwards step since the mid-2000s.

How this has impacted on the fans is intriguing because they can’t very well admit that coming fourth is a hollow victory, not with the online tribalized banter wars as vicious as they are. Therefore, a defeat for Spurs this weekend, and a win for the Gunners, will give rise to over-the-top delirium and gloating, a frenzied celebration at finishing a full 25 points off a title scrap they used to inhabit. This is where we are now. This is where football is.

Yet should we recall a frankly unhinged rant by well-known Arsenal supporter Alan Davies some months back we see the real mindset of Gooners, entrenched in the belief they are still among the very elite. On losing to City at the Emirates in supposedly contentious circumstances, the QI panellist unleashed on a podcast, saying of the Blues’ owners: ”Get out of our league. We don’t want your money. You’re not wanted here. Piss off. Start your own league in your desert.”

Pertinently, he also described Arsenal as a ‘football institution in this country’, implying that City are not.

But had Manchester City’s owners indeed formed a league ‘in their own desert’ back in 2008 – and ignoring the rank racism of Davies’ words – his club would have averaged a 3.5 league placing in the 14 years since, not 4.5. In other words, it is not the rise of the ‘super clubs’ in the modern game that has knocked the Gunners off their perch. They’ve manged to do that perfectly well by themselves.

That though is a regression, and more so an unfair one, because Arsenal fans’ hypocrisy at rejoicing at coming fourth while still carrying a sense of entitlement as if they are seasonal contenders to the throne is true of others too, Manchester United most notably.

What most sticks in the craw, above and beyond such hypocrisy, is what plays out each and every May, which is one or two colossal clubs whose fans should demand more, delighted to fail upwards. It’s ignoble. It’s embarrassing.

It is not especially filling to feast on crumbs of comfort. To pretend otherwise fools precisely no-one.