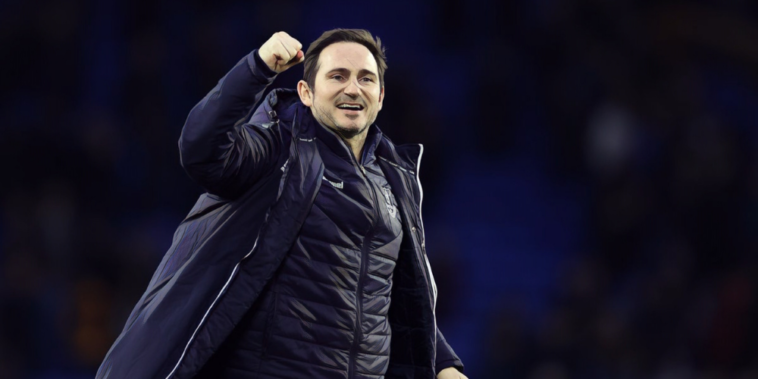 Frank Lampard insists Everton will go ‘full pelt’ against Arsenal this weekend and has discussed his summer transfer plans.

Everton secured their Premier League status with a 3-2 win over Crystal Palace on Thursday, coming from two goals down to win in a thrilling comeback and ensure top-flight survival.

Lampard admits the pressure of relegation is now off his side ahead of their final day trip to Arsenal, but insists the Toffees will be looking to win when his side travel to face the top-four chasing Gunners.

“I will relax more and I don’t mean that in a light-hearted way because I understand Arsenal and Tottenham are in a battle and we’ll go and do our absolute best to approach the game in the right way,” he said ahead of the game.

“At the same time, we’ve not had that luxury – others have and we saw that playing against Brentford and then again against Palace in the first half. There’s something nice about ‘relaxing’.

“Since my first day here we’ve not had chance to do that and maybe that’s the Premier League, but our situation also added to that.

“It’ll be nice for the players to have that feeling.

“A couple of players who maybe haven’t had opportunities will get opportunities, but we’ll be going full pelt to try to get the right result.”

Lampard also opened up on his plans for Everton moving forward and says the club must move ‘quickly’ to assess the squad and look for areas to improve upon.

In Frank We Trust. ✊

“I’ve been thinking about [the longer-term], obviously it’s been second in the list of priorities because we had to get this done – but now we’ll continue to think about that because we want to take the Club forward,” said Lampard.

“We’ll look at how we can work [with the players] which is the first thing, then, about how we can add to improve.

“We have that. We have [Director of Football] Kevin Thelwell now, we have the Board who want to get the best out of this club.

“We don’t want to be here next year but we understand if we don’t make positive moves then it’s possible, so we’ll be ready to move on that quickly.

“If we want to start playing a bit better between the lines, then it starts from the back and we’ll look at all the things through the middle of the pitch.

“I also want the squad to be more robust. We’ve had far too many injuries – we came into injuries and those injuries continued and ramped up. We lost two centre-backs in my first week here, one for 10 weeks, the other for five weeks. Then, we lost them again later on.

“There are things we have to look at around the whole situation that can help that stuff. But I’ve been really pleased with the players commitment and togetherness – they deserve their moment and I don’t want to take away from plaudits the players deserve tonight.”