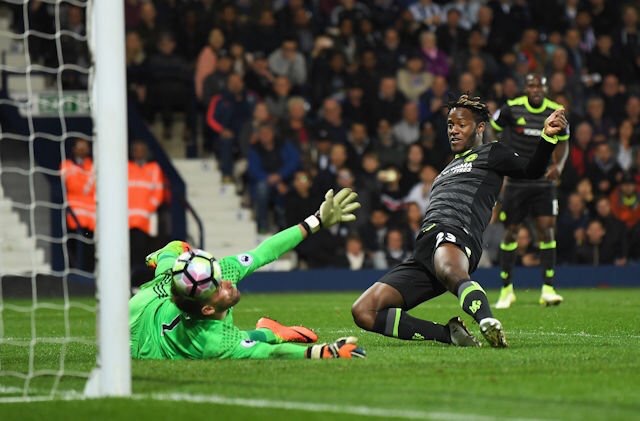 A tight game that could have gone either way saw Chelsea grab the win, an seize the Premier League title in the Black Country.

Only one goal was needed to win Chelsea the Premier League title. The Blues threw failed attack after attack at Tony Pulis’ fortress of a West Brom defence. Cross after cross was cleared by the backline of only five but what seemed like a million white shirts. Shot after shot was stopped from getting into the net at the Hawthorns. Who do you call to save the day?

The fourth official flashed the Bat Signal—I mean, the substitution board—in the 76th minute to call upon the unlikely hero in Michy Batshuayi. The 23-year old has not yet started a match in the 2016–17 Premier League, but was called upon late in the game to score the most important goal of his career.

West Brom played football with numbers in defence and a gritty physical style of play that shut down Chelsea with constant clearances and fouls. Nobody wanted to be the team that gave the Premier League championship away, and West Brom played to not lose.

Gary Cahill scuffed his shot in the 82nd minute that went well short and wide to the right of the goal. Cesar Azpilicueta reacted quickly and stepped ahead of the Baggies’ backline to put in a low cross into a spot in front of the goal with no defenders and just out of the reach of Ben Foster.

Batshuayi was in the right place at the right time. He flew in with his imaginary cape and slid into the path of the ball to finally put one into the goal. That was enough for Chelsea to win the match 1-0 against West Bromwich Albion for their fifth Premier League title in club history.

The Belgian striker scored his second goal in England’s top league, none being more important than the one he scored on Friday at the Hawthorns. When asked about whether this was the best moment of his footballing life, he gave an enthusiastic “Yeah,” with fellow international Thibaut Courtois by his side to translate.

“Because we didn’t have Champions League and European football, [Batshuayi] didn’t play a lot of minutes,”

“But he came in and scored the goal, and that’s what it’s all about. Score the one you have to score, even if you don’t have many minutes, and he did it.”

The win was not important for just the club, but for Antonio Conte as well. The manager revived Juventus from their woes, and performed and identical miracle with Chelsea who finished 10th only a season ago. He was grateful to his employers in his post-match press conference.

“I’m very happy the club because, don’t forget, the club trusted me,”

“To repay the club is very important for me.”

The press conference was abruptly ended as John Terry, David Luiz, and Diego Costa kidnapped the Italian so the players could celebrate with their boss.

With nothing to play for but pride, West Brom continued their string of 1-0 losses in the last four of five matches. Their place in midtable has been solidified. They look to spoil Manchester City’s Champions League hopes on Tuesday at Etihad Stadium. Chelsea will continue their victory lap with short rest when they return to Stamford Bridge against Watford on Monday.

Here are some talking points of the match.

Tony Pulis is known and respected for his physical long-ball style of football that achieves good results out of smaller clubs. His teams have never been relegated.

Eden Hazard and the rest of the Chelsea were shut down for most of the match. West Brom were physical with their tackles, earning three yellow cards in the process. While too many of them were aimed at Hazard’s ankles and feet, the Baggies showed that they weren’t going to bow down to the eventual champions.

West Brom had their chances on the counterattack, as is the style of Pulisball. Pressure started to mount on Chelsea when the home team made their substitutions, bringing in Claudio Yacob, Nacer Chadli, and Marc Wilson. The Blues’ defence held it together with last-ditch tackles from Azpilicueta and clutch saves from Courtois.

West Brom’s form hasn’t been great as of late, last winning against Arsenal on March 18. Nevertheless, Tony Pulis deserves praise for the fight he put up against Chelsea, and for getting his club into the top half of the table after finishing 14th last season.

It’s a bold strategy, Cotton. Let’s see if it pays off.

With Chelsea attempts continually getting stuffed, Antonio Conte had to make some adjustments in the game.

The man who decided the fate of the Premier League in the last two seasons was Hazard, and he was unable to get anything past a packed box. He only managed three shots, and none of them were on target.

Conte proceeded to make a bold move. The Chelsea winger was pulled for Willian in the 75th minute.

There’s a saying in fantasy football (the American kind) that teams should “start their studs.” You don’t fix things by removing important screws that hold together whatever Ikea furniture you’re building.

Conte did it and got the goal his squad needed to secure the title.

Bold, and it paid off.

Man of the match

Reddit user /u/arshaqV said it perfectly in a comment on /r/soccer’s discussion about Batshuayi’s goal and Chelsea’s title win.

The Batsman had a wonderful preseason with Chelsea, but was unable to get a sniff onto the pitch throughout the season. And now he deserves his own in-form card on FIFA 17 Ultimate Team.

Batshuayi hasn’t had much game time this season, something I’ve already looked at in my previous articles. Where should Batshuayi be playing next season?

Chelsea’s king of social media, Michy Batshuayi, is the man of the match for the most important goal he’s scored in his life. Because of him, Chelsea fans around the world are celebrating the title win of one of the greatest squads to play in West London.

Chelsea fans, be carefree wherever you may be, and keep the blue flag flying high as champions of England!