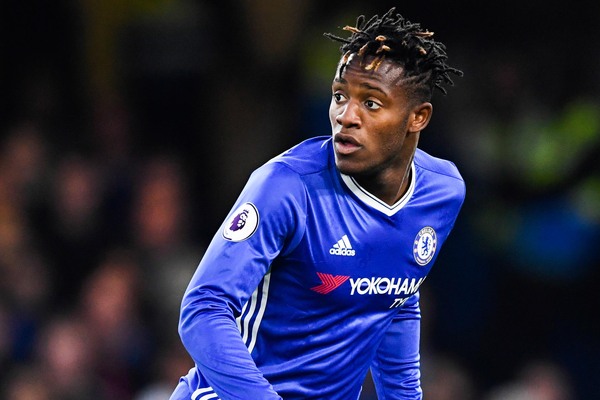 Surely with a transfer fee of £31.5 million, one would think that player would at least be getting some minutes in a club’s lineup.

Even as a backup striker, one would expect Michy Batshuayi to get more playing time than he has this season, especially while Diego Costa is in his current goalscoring slump.

Instead, the 23-year old forward is relegated to only early FA Cup starts and a few Premier League substitutions, usually after or around the 90th minute. When Costa didn’t start against Bournemouth in this season’s Boxing Day fixture, Eden Hazard was counted on to lead the line rather than Batshuayi.

After scoring 22 goals and contributing nine assists for Marseille in 47 appearances during 2015–16, the Belgian striker moved to the Premier League to continue his development as a player. Instead, his progress has stalled as he continues to sit on the bench for Chelsea.

Looking to the future, a decision needs to be made on where Batshuayi should be playing next year to continue his growth. Even with Costa potentially leaving, Chelsea are looking for strikers on the transfer market to bolster their squad. This leaves little space for the young forward, but there are cases on whether he should stay or go.

It is likely that Batshuayi would continue to warm the bench with rumours of fellow Belgian Romelu Lukaku returning to Chelsea. Without regular playing time, the “Batsman” will struggle to develop his skills.

An example of another Chelsea prospect that has struggled to find a spot in Chelsea’s Premier League side is Ruben Loftus-Cheek. He was regarded as the next graduate to start for the Blues during José Mourinho’s second tenure, who hand-picked the English midfielder to stay with the first-team squad.

Loftus-Cheek has only made 31 appearances for Chelsea since the 2014–15 season, and he doesn’t look to break into the squad past N’Golo Kanté or Nemanja Matic.

Batshuayi is facing a similar situation. Without regular playing time, his value will continue to drop.

However, there are advantages for staying with Chelsea next season.

Antonio Conte has brought a new system and philosophy to the London club, difficult to find elsewhere in England. The new formation is something that needs to be drilled into the minds of the players. Although Batshuayi doesn’t play many matches, he’s honing his skills on the training ground under the tutelage of an innovative manager and coach.

Playing games will always be superior to simply practicing, but playing in different systems at different clubs while on loan would not give Batshuayi the chance to learn what Conte expects of him at Chelsea.

If he goes on…

Batshuayi could go to a different club, either permanently or on a loan deal. A permanent deal is unlikely since Chelsea has the upper hand in negotiations with no reason to sell the young striker. To sell him would be bad business by the club, especially with the potential to grow into a star player.

A loan deal would be ideal for Batshuayi to find regular playing time while maintaining his chance to break into Chelsea’s starting XI in the future. Loan deals have helped the likes of Chelsea players like Thibaut Courtois who played for Atletico Madrid while waiting for Petr Cech to make his exit out of Stamford Bridge.

Tammy Abraham has also found success on his loan spell with Championship side Bristol City. The 19-year old striker has scored 24 goals in 44 appearances this season, and looks ready to play for a Premier League side to continue his development before returning to Chelsea.

Eden Hazard spoke with La Dernière Heure about how Batshuayi’s current season at Chelsea has been difficult since transferring from Ligue 1.

“It is not easy,” Hazard said in a translation from French. “He had a good season in Marseille, a season with being able to play and score.”

Batshuayi doesn’t need to go to a Championship club since he proved his goal-scoring ability at the top flight in France. He should go on loan to a Premier Leauge side to learn the intricacies of the English game. There must be some clubs that would jump at the chance to sign a deal with the striker that has been compared to fellow Marseille and Chelsea legend Didier Drogba.

What should he do?

There is no player bigger than the club.

Nathan Aké had his loan at Bournemouth cut short, and he returned to Chelsea to reinforce the bench in case of any injuries. Even though he played regularly while on loan, the club decided that their needs were more important than the loanee’s development.

Anyone can speculate on what would be best for Batshuayi’s growth as a player, but the needs of the club have to come first as long as he is under contract. He will only go on loan if Chelsea signed enough strikers to play for the first team.

If the club needs the 22-year old to back up the strikers next season, that will be his role in the squad. Hopefully, he’ll have had more time to learn and practice under Chelsea’s system, and he’ll find himself making more appearances for the Blues.