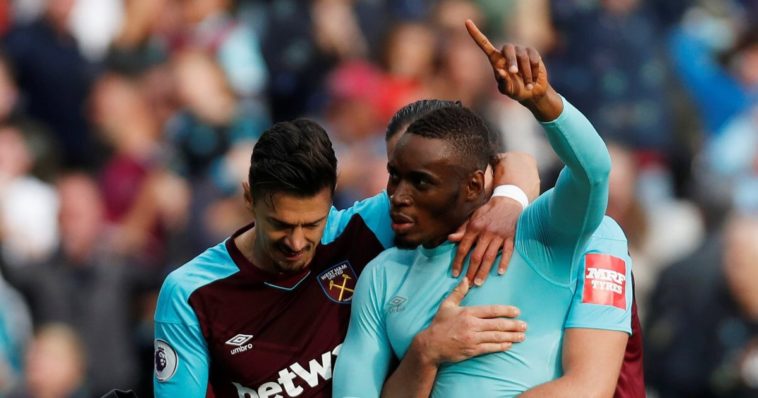 West Ham defeated Swansea by a margin of 1-0 at the London Stadium today, courtesy of a late goal from Diafra Sakho. The result sees West Ham leap-frog Swansea, who now sit 18th in the table, whilst the Hammers have climbed out of the relegation zone to 15th. Here are five takeaways from the result.

After enduring a disastrous start to the season, with ten goals shipped in three games, West Ham have now kept three clean sheets in their last four Premier League fixtures. That experienced centre half James Collins was absent through injury today only reinforces the strength in depth that West Ham have at the back.

Yesterday I authored an article which suggested that Slaven Bilic would experiment with a front two of Andy Carroll and Javier Hernandez. The absence of Marko Arnautovic through alleged illness, however, prompted Bilic to start with Carroll and Hernandez together from the off.

A lack of chances meant that the two had a limited impact on the game, however Bilic’s decision to turn to a 4-4-2 could indicate that West Ham fans have not seen the last of this formation. With the creativity brought to the field by Manuel Lanzini, who returned from the bench after injury today, the partnership could yet bear fruit.

The London Stadium rang out with a chorus of boos following the substitutions of Hernandez and Andre Ayew in the 82nd minute for Arthur Masuaku and Diafra Sakho, and would surely have been ammunition to pour on Slaven Bilic had the match finished goalless. Nevertheless, the former assisted the latter for the late winner, vindicating Bilic’s tactical switch.

West Ham evidently have the strength in depth to continue fighting to the late stages of games, with useful options across the bench. Also noteworthy is Diafra Sakho playing the hero, the striker having made himself something of a villain over the summer transfer window with transfer requests and bizarre deadline day activity.

Battling to the End

A common criticism levied at West Ham last season was their penchant for conceding late goals. This season however, late goals have now seen wins over Huddersfield and Swansea, as well as a spirited fightback against Tottenham Hotspur. It may be the case that, after a bad start to the season, Slaven Bilic has managed to instil some belief and fight to his team that can help persuade West Ham fans to stay until the very end of the game.

Another game passed without a goal for Paul Clement’s Swansea, who have failed to score in five of their league games this season. Despite enjoying 57 per cent possession, the Swans managed just one shot on target, never truly testing the West Ham defence.

Though defensively solid until the final minutes of the game, Swansea must find goals soon, starting after the international break against Huddersfield. If players such as Wilfried Bony do not find form soon, the coming weeks could prove very nerve-racking for Swansea fans as the table begins to take shape.