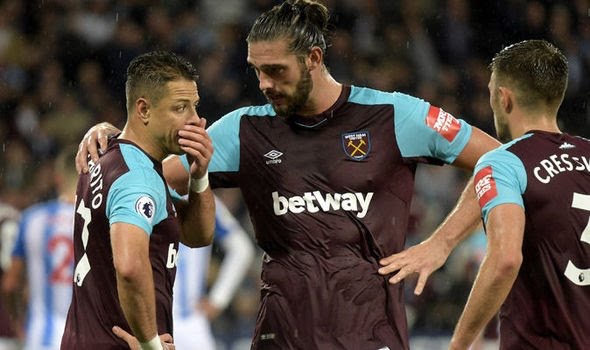 West Ham United boss Slaven Bilic has claimed he sees ‘potential’ in a partnership between Andy Carroll and Javier Hernandez.

Bilic once again addressed the demand for a strike partnership between Andy Carroll and Javier Hernandez at his Friday press conference. During last week’s defeat to Tottenham Hotspur, Hernandez started alone up front, with Carroll relegated to the bench. Injury to Michail Antonio saw the latter enter the fray, however this also meant that Hernandez was pushed out wide. West Ham’s attack then faltered somewhat, only regaining incisiveness following Serge Aurier’s red card.

In today’s press conference Bilic reiterated earlier statements that Carroll and Hernandez’s partnership would create selection problems with other figures in the team, including other strikers like Andre Ayew, as well as leaving the defence somewhat vulnerable. Nevertheless, the manager’s stance appears to have softened somewhat. Bilic concluded his discussion of the topic by noting that he sees the ‘potential’ in a Carroll/Hernandez partnership, suggesting that an experiment with may be forthcoming.

Swansea City are one of the ideal teams to face right now if Bilic is considering such a move. The Swans are seemingly lacking confidence, sitting just two points above West Ham, and having scored only three league goals so far. Their sole win this season came against Crystal Palace, a team already written off by many as relegation certainties. Facing a goal-shy team, and holding the home advantage, West Ham may well take the opportunity to experiment with a front two.

It is unlikely that Bilic will make a drastic change by opening the match playing two strikers together, however his comments suggest that at some point during the game a partnership could be seen. With Michail Antonio and Manuel Lanzini both available for selection following injury scares, the necessary width is there to switch to a 4-4-2 should the situation call for more firepower, or if West Ham find themselves in control of the match.

With Ronald Koeman’s Everton having struggled playing a 4-4-2 against Limassol midweek, and Diego Simeone’s Atletico Madrid looking similarly sluggish against Chelsea before switching to a 4-3-3, the successful deployment of a front two in any formation would likely catch the eyes of many pundits and managers. This could be just what West Ham need to kick on with their revitalised season, and what Bilic needs to answer critics over his tactical approach.