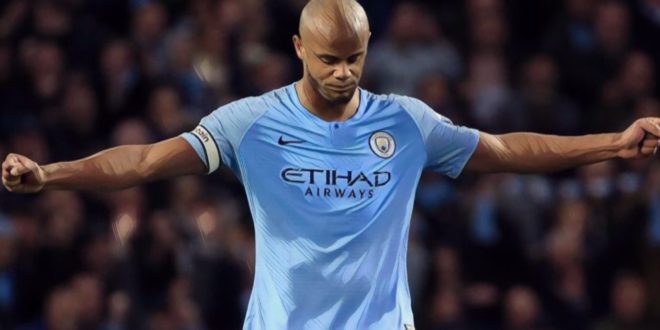 The leader of an emerging force in English football and a bargain buy in an era of huge investment, Vincent Kompany’s legacy at Manchester City is assured after captaining the side during the most successful period in their history.

Far from just a fine player, however, Kompany proved a fine character during a time of revolution in the blue half of Manchester, buying wholeheartedly into the ambitious project of the Etihad club and speaking eloquently on all kinds of matters.

One of the great defenders and most respected leaders of the Premier League era, here are 15 of the best quotes from Manchester City icon Vincent Kompany:

“My dad wasn’t accepted in the family at the beginning. My mother comes from the most rural village you can imagine and when she arrived, in the 70s, with my dad, straight from Africa, it was a shock. It was ignorance. My dad always ended up being accepted because of his personality. It was normal for us to go to youth tournaments and be called monkeys; parents shouting it. That would nearly cause a fist fight with my mother. We were taught to be stronger.” – Kompany on the prejudices faced because of his mixed ethnic background.

“I’ve been sometimes very, very close to being on an extremely wrong path. If I had wanted to sell drugs, I could literally have gone downstairs and walked into some dark and shady operation. If I’d wanted to look good to impress girls, I could have hooked up with one of the gangs. These were all people I knew. I was playing football with these guys. Setbacks, racism – everything was like feeding a fire. The biggest danger to me is complacency or inaction, which I never allow into my life. These are the defining moments – that age where you can throw everything away by being the worst version of yourself.” – It could have all turned out different following a tough upbringing in Brussels.

“I had an edge, a different way of dealing with things. My parents always revolted against inequality or unfairness, so you can imagine that when my teacher would punish someone – or me – for something that wasn’t fair, I wouldn’t take it.” – Thrown out of school for a lack of attendance due to football, and removed from Belgium’s youth sides for clashing with coaches, Kompany believes his ‘edge’ was down to the spirited attitudes of his parents.

“We’ve put a foundation down, we’re going to build a house on it now.” – Speaking after helping end City’s 35-year wait for a major trophy with FA Cup success in 2011, Kompany outlined his ambitions for the future. His rallying cry proved true, winning nine further major honours over the next seven seasons.

“I’ve made many sacrifices to get where I am today and football is everything to me. This is what I fought for so hard. I want to be the best defender in the world and I want Manchester City FC and Belgium to become the best club and country in world football. I won’t give up that dream. “My mindset stays unchanged, I will fight to get what I deserve, my best years in football.” – Kompany’s career was often beset by injury problems, but his drive and determination remained unchanged despite a series of setbacks.

“When I was coming through, I had very little support from the older players. I always said to myself that if I make it, I never want to be that kind of person. I have a passion for seeing young players develop, so every young player who comes into the first team, I am willing to listen. I will give him everything I have.” – He’s some man, Vincent.

“Our generation has been described as a golden generation. I hate that term.” – The lauding of the Belgian national side – yet to win a major honour – did not sit well with the country’s captain.

“Once you achieve a goal and you are on that high, you have to consciously pull yourself in to say, ‘I need to have the same hunger and desire as when I had nothing.’ That’s the hardest thing to do in life. That is getting challenged every single day once you win titles.” – The Belgian on maintaining the hunger to win major silverware.

“Every club you sign for, they give you the same pitch. ‘We’ve got a big project, great ambitions, we want to achieve this, we want to achieve that we want to kick on and be a better team. I just happened to be lucky that City was the one club that didn’t lie about it.” – Reflecting on City’s success after celebrating a decade at the Etihad.

“I’ll be connected with City for the rest of my life as a fan, as an employee, as an ambassador whatever it is, it doesn’t matter. Whatever City decides or whatever I decide it’s not something we can undo. We’ve had ten years and ten years at City in the transitions we’ve had is like 30 years at another club. It’s cemented there’s nothing we can do about it, we’re tied to each other for life, my family is from Manchester, my kids are Mancunians. As fans, as whatever capacity, we’ll always be there.” – Kompany on his bond with City, 10 years after arriving from Hamburg.

“Today, there was a little bit of frustration because everyone was saying, ‘Don’t shoot! Don’t shoot!’ and I could really hear it and it annoyed me. So I said, ‘Hold on a second – I’ve not come this far in my career for young players to tell me when I can take a shot or not’ and I just took it.” – Kompany on that stunning match-winning goal against Leicester.

“If I was in a deciding position at City now, I would do everything I can to keep Pep for as long as I can. He is truly the best. To say anyone will ever come near, it is speculating in a ludicrous way.” – Asked whether he had ambitions of returning to City as manager, Kompany was definitive in his belief that the club are in the right hands under Pep Guardiola at present.

“I’m an adopted Mancunian. This city has grown on me. I have a wife from Manchester and have three kids who think they are more Mancunian than anything else, which is a problem I need to address!” – Few imports have embraced the Mancunian culture quite like the former City captain.

“I will never forget how all Man City supporters remained loyal to me in good times and especially bad times. Against the odds you have always backed me and inspired me to never give up. Sheikh Mansour changed my life and that of all the City fans around the world, for that I am forever grateful. A blue nation has arisen and challenged the established order of things, I find that awesome. I cherish the counsel and leadership of a good human being, Khaldoon Al Mubarak. Man City could not be in better hands.” – Kompany’s leaving message after bringing his City career to an end in 2019.