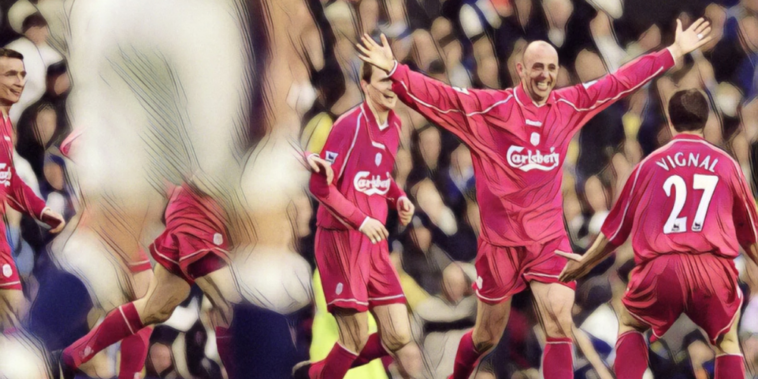 Liverpool and Everton meet in the Premier League this weekend in one of the most eagerly anticipated fixtures on the English footballing calendar, the Merseyside derby having often been a clash packed with goals and incident.

Throughout the years the two city neighbours have played out some classic contests, with no shortage of unforgettable moments when Everton and Liverpool collide.

Ahead of their clash at Anfield, we’ve decided to look back at some of the most iconic incidents between the teams in the Premier League era.

The early seasons of the Premier League era were far from perfect for the Merseyside rivals, each failing to replicate the successes of the previous decade.

In the relaunched division’s third season, Everton turned to club great Joe Royle following a disastrous start to the campaign, the Toffees finding themselves bottom of the division after just one win from their opening 16 games.

On this day in 1994, new #Everton boss Joe Royle introduced the Premier League to the Dogs of War. Ferguson + Rideout help #EFC to a 2-0 win vs Liverpool. pic.twitter.com/UaFbv4JdWn

His first fixture saw Liverpool arrive at Goodison Park and his new side immediately responded to secure a 2-0 win, goals from Duncan Ferguson and Paul Rideout securing a much-needed three points and local bragging rights.

The win sparked an upturn in form as Everton beat Chelsea and Leeds to make it three consecutive wins, their new-manager bounce leading to an escape from relegation and shock FA Cup success.

Robbie Fowler found himself at the centre of fabricated drug rumours in Liverpool following his stunning emergence on the red half of the city, with the forward choosing to make a mockery of the allegations during a 1999 Merseyside derby clash with Everton.

With the foundation of the rumours believed to have come from those of an Everton persuasion, Fowler opted to celebrate his goals in a 3-2 win against the Toffees with a simulation of him snorting the touchline – right in front of the Everton fans.

Fowler’s apology and a bizarre alternative explanation from Gerard Houllier – who said the incident was inspired by a grass-eating celebration from Cameroonian teammate Rigobert Song – failed to convince the FA who promptly handed the forward a four-game ban.

After receiving another two-game ban for an incident involving Graeme Le Saux later in the season, Fowler’s suspension perhaps cost him a chance at the Premier League’s Golden Boot.

Eyebrows were raised when Liverpool completed the free transfer signing of Gary McAllister in 2000, with the wisdom of signing a 35-year-old midfielder from Coventry City questioned.

Over the course of a brilliant first season at Anfield, however, McAllister established himself as a cult figure. His experience and quality proved vital as Liverpool completed a UEFA Cup, FA Cup and League Cup treble under Gerard Houllier.

McAllister scored several crucial goals across the course of the season, including a dramatic Merseyside derby winner that saw Liverpool snatch a stoppage-time win at Goodison Park.

A breathless encounter had seen four goals evenly shared, a red card, and a missed penalty for Robbie Fowler, when McAllister stood over a free-kick some 40 yards from goal.

With everyone – including Everton goalkeeper Paul Gerrard – anticipating a cross, McAllister whipped the set-piece over the wall and into the near post to spark jubilant scenes from the travelling Liverpool support.

The mid-noughties saw Liverpool and Everton emerge as evenly-matched for perhaps the first time in the Premier League era, with the latter having finished above the Reds to secure a top-four finish in 2004/05.

Liverpool finished that campaign as Champions League winners and added the FA Cup the following season, but saw their hopes of a title challenge halted early in the 2006/07 campaign at Goodison Park.

Everton have endured an indifferent Premier League record against Liverpool, but their 3-0 success was arguably their most emphatic result of the modern era.

Tim Cahill opened the scoring for the Toffees, before Andy Johnson capitalised on a mistake from Jamie Carragher to double the home side’s lead. Johnson added a second following a howler from Pepe Reina for the visitors, as the Spaniard fumbled Lee Carsley’s long-range effort before juggling the ball onto the onrushing Everton forward to make it three.

Steven Gerrard was often central to derby meetings with Everton, perhaps none more so than a 3-0 win for Liverpool during the 2011/12 season.

Gerrard scored a hat-trick as Liverpool secured their biggest win over Everton in almost a decade, becoming the first Merseyside derby hat-trick scorer since Ian Rush in 1982, and the first at Anfield since Fred Howe’s treble for Liverpool in 1935.

It proved a special occasion for the Liverpool captain, whose first goal came with a wonderful lifted finish over Tim Howard, before twice being teed up by Luis Suarez to claim the match ball.

“He [Suarez] has got history. What it will do is turn the supporters away from football because they [players who dive] are very good at it.”

David Moyes’ words on Luis Suarez came back to haunt the Everton boss ahead of a 2012 derby meeting between the teams, with the Uruguayan setting off in celebration towards the home bench after opening the scoring at Goodison Park.

Suarez launched himself into a dive right in front of Moyes, whilst the latter’s comments looked even more foolish after Everton captain Phil Neville found himself in the referees’ notebook for a first-half simulation.

Everton fought back from two goals down to rescue a point in a 2-2 draw, though Moyes was perhaps breathing a sigh of relief as the offside flag denied Suarez a winner – and his hat-trick – in stoppage time.

Everton and Liverpool have enjoyed some classic contests throughout the Premier League era, but few can match the entertainment of a chaotic 3-3 draw between the sides in November 2013.

The two teams exchanged punches from the first bell in an end-to-end encounter at Goodison Park, with the score level a 1-1 after just eight minutes as Kevin Mirallas cancelled out Philippe Coutinho’s early opener for Liverpool.

Luis Suarez restored the Reds’ advantage before the break, but Romelu Lukaku’s quick-fire double for Everton looked to have earned the home side a memorable win.

With just seconds remaining of normal time, however, Liverpool added to their happy habit of striking late at Goodison as substitute Daniel Sturridge headed home Steven Gerrard’s free-kick to snatch a point.

Late goals have so often decided the outcome of Merseyside derbies and Sadio Mane netted one of the latest winners of the Premier League era, settling what had been a forgettable fixture with a 94th-minute winner at Goodison Park.

An underwhelming meeting between the teams had been heading towards a goalless draw, before Mane struck in the dying seconds – reacting first to a loose ball after substitute Daniel Sturridge had struck the post – to send the away support into raptures.

The win extended Everton’s derby record to just one win in 20 meetings with Liverpool, another sucker-punch in the drama-filled rivalry between the Merseyside neighbours.

Perhaps none of Liverpool’s late interventions have been as excruciating viewing for Everton fans as Divock Origi’s bizarre winning goal in December 2018, the forward scoring in extraordinary circumstances to snatch a late, late win at Anfield.

The meeting was heading towards a goalless draw when Jordan Pickford gift-wrapped Liverpool three points, the Everton goalkeeper fumbling a sliced Virgil van Dijk effort that had ballooned high into the air

Van Dijk himself had turned away in dismay at his fluffed attempt, only to hear Anfield erupt as Pickford fumbled the ball onto the crossbar and into the path of Origi to head home in the 96th minute.

It was a cruel way for Everton to lose and sparked ecstatic celebrations from the home support, Jurgen Klopp racing onto the pitch to celebrate with Alisson as Liverpool added another late winner to an ever-growing derby collection.

Everton had endured a nightmare run at the home of their city rivals since the turn of the millennium, failing to win at Liverpool since Kevin Campbell’s winner in a 1999 clash between the sides.

Liverpool had also made Anfield a fortress under Jurgen Klopp, building a 68-game unbeaten league record on home soil before a disastrous start to 2021.

The Reds had lost successive home games to Burnley, Brighton and Manchester City ahead of Everton’s visit in February, a fixture which saw the Toffees produce a fine performance to extend the dismal form of their Merseyside neighbours.

Richarlison opened the scoring for Carlo Ancelotti’s side, before Gylfi Sigurdsson scored from the spot after Dominic Calvert-Lewin had been brought down by Trent Alexander-Arnold.

The win was Everton’s first in 24 meetings with Liverpool in all competitions (D12 L11) and ended Liverpool’s longest ever unbeaten run against a single appointment, whilst it was a first win at Anfield after 23 failed attempts.