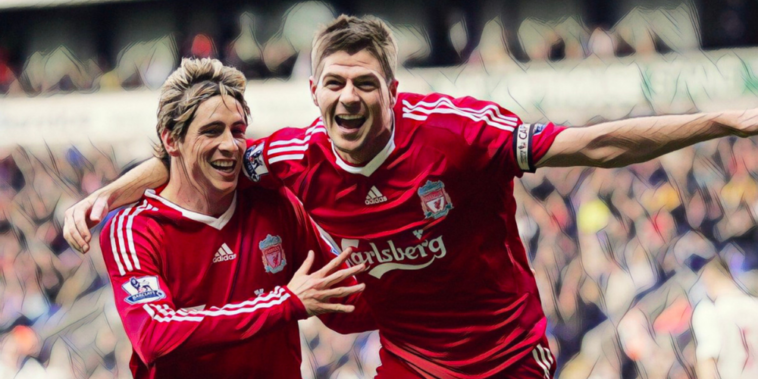 For much of Steven Gerrard’s career at Liverpool he carried the weight of expectation for his childhood club.

Fine footballers came and went as teammates, but Gerrard remained the constant as he sought to restore the Reds back to a status as England’s finest, having grown up in a period of domestic dominance at Anfield.

Michael Owen was the first to strike up an understanding with his fellow academy graduate, the duo having stepped into the senior side to become the bright talents in Gerard Houllier’s team, each starring during a treble of cup successes shortly after the turn of the millennium.

Latterly it was Luis Suarez who brought the best from Gerrard, squeezing an Indian summer from the Liverpool captain as the legs began to slow in his twilight years.

His best dance partner, however, came in the form of a Spanish striker whose career began in not too dissimilar fashion. Fernando Torres was the hometown hero at Atletico Madrid, breaking into the side and being handed the captaincy whilst still a teenager.

Torres’ exciting emergence saw him finish as Atletico’s leading scorer in five consecutive campaigns before the age of 22, three of which saw him wear the armband as he became the on-field representation of a fanbase who adored him.

Europe’s richest sides had tried and failed to prise him from the Vicente Calderón, before Torres made the decision to move on from the club of his affections and depart for England in search of success.

Liverpool won the race to sign Torres in a club-record deal worth around £20m, with the forward joining a Spanish revolution under Rafael Benitez on Merseyside.

Expectations were high, but it took less than two games for Torres – and his instant understanding with Gerrard – to raise the roof at Anfield.

Chelsea were the visitors in the second game of the 2007/08 season as Torres announced his arrival.

His first goal in red was a glimpse of what was to come from Liverpool’s potent pairing, as Gerrard’s audacious outside-of-the-boot pass released the summer signing.

Torres did the rest, a change of pace leaving Tal Ben-Haim in his wake before a composed finish opened his account. Lift off at Liverpool.

Torres continued to fire as his chemistry with Gerrard improved with each performance, the latter habitually picking passes for the scampering Spaniard to race behind defences.

Together the two combined for 54 goals in all competitions, with Torres’ 24 league goals setting a new Premier League record for a foreign signing in their debut season.

He became the first forward since Robbie Fowler in 1996/97 to score 20 league goals for Liverpool, whilst back-to-back home hat-tricks against Middlesbrough and West Ham made him the first Reds player in 60 years to score consecutive trebles at Anfield.

Torres had taken the Premier League by storm and his stretching of defences allowed Gerrard to thrive in behind. Newcastle felt the full force of their captivating connection in March 2008, as Gerrard created the side’s second goal for Torres, before the roles were reversed and the favour repaid.

Liverpool finished the season fourth and reached the semi-finals of the Champions League. Their run had included a Gerrard and Torres inspired win over Inter Milan in the last-16, before a a terrific tie saw Arsenal beaten 4-2 at Anfield, with the Reds” tantalising two each finding the net.

That maiden season was a precursor to what was to come, a warning sign to the rest of the league. The 2008/09 season saw Benitez’s side, built on a midfield-axis of Javier Mascherano and Xabi Alonso and spearhead by the sublime synchronisation of Gerrard and Torres, challenge Manchester United’s divisional dominance.

The obvious intuition each had for the other’s talents became evident as the season progressed, rarely needing to look to know where their marauding teammate was heading.

Liverpool lost just twice for the season in the Premier League, but a series of frustrating draws dented their title hopes. The Reds finished the season in stunning form, however, with Gerrard and Torres at the heart of it.

Torres’ late, late double secured a dramatic win over Chelsea in February, before Liverpool finished the season with 10 wins from their final 11 league fixtures.

Two spectacular results early on in that run demonstrated Gerrard and Torres at their brilliant best.

Real Madrid were first to fall victim to the Reds’ rampant duo in the Champions League’s last 16, as the two scored three of Liverpool’s four goals in a 4-0 thrashing of the Spanish giants at Anfield.

Just days later and Liverpool travelled to face title rivals Manchester United, knowing nothing but a win would do to keep their ambitions alive.

Cristiano Ronaldo’s penalty opened the scoring for the home side at Old Trafford, before an electric performance from Torres and Gerrard turned the game around.

Torres – whose speed and movement so often troubled Nemanja Vidic – hounded the Serbian centre-back into an early mistake before firing an equaliser past Edwin van der Sar.

Just before the break, Gerrard converted from the penalty spot after his powerful run was brought to an end by Patrice Evra’s mistimed challenge inside the box. Gerrard’s marauding runs caused problems and Vidic, who had endured a nightmare against Torres, was sent off for hauling down the Liverpool captain.

Fabio Aurelio brilliantly curled home the resulting free-kick from 25 yards and Andrea Dossena put the finishing touch on a wonderful win for the Reds in Manchester.

Gerrard was named as the FWA Footballer of the Year despite Liverpool’s runner-up finish, having scored a career-best 16 league goals during the 2008/09 campaign. Torres – despite making just 24 appearances as a result of injury problems – scored 14 of his own and his absence prevented Liverpool from narrowing, and perhaps overhauling, the four-point gap to Manchester United.

An absolute stunner from @Torres 🔥⚽️pic.twitter.com/TlNcistJhy

Fitness issues impacted both players over the following seasons and the break-up of Benitez’s side brought an end to Premier League title hopes. Alonso departed for Real Madrid in 2009, before Mascherano followed his midfield colleague out the exit door the following summer.

Torres remained and provided further glimpses of his goalscoring magic, but his form suffered and frustrations grew. Murmurs of his unrest regularly surfaced during the 2010/11 season and in the January window he sought an exit, signing for Chelsea in a controversial £50m deal.

It was a move that acted like a dagger to the hearts of the Liverpool fans, and Gerrard, who had seen the foundations for a successful side crumble in consecutive transfer windows.

Torres’ acrimonious exit brought an end to one of the Premier League’s great double-acts, one which both players admitted was the best period of their careers.

“I didn’t play with Torres long enough, because he went to Chelsea and broke my heart,” Gerrard said on Robbie Fowler’s podcast.

“My best years were alongside Torres in terms of how I felt. I was really, really gutted [when Torres left]. We’re working so hard at this point to try and get as close as we can to close the gap and challenge.

“At Liverpool at the time it always felt like we were taking huge strides and getting close and progressing really well, and then at a really key time and a key moment for the team and the group, a big player gets taken away and it takes time to recover from that.

“My relationship with Torres, I was getting a lot of goals at that time. I was at my peak and felt fantastic.”

Torres never recaptured his exhilarating Liverpool best upon leaving the Reds, struggling at Chelsea despite earning the team honours that had eluded him.

Spells with AC Milan, Atletico Madrid and Sagan Tosu followed before retirement, though his performances were a pale imitation of the version who petrified Premier League defenders in partnership with Gerrard.

“I always say the best player I played with is Steven Gerrard,” Torres said after announcing his retirement in 2019.

“I found he was the player who completed my game. I think my level got into a different dimension when I was on the pitch with him.”

Torres was right in his assessment of his time in tandem with Gerrard, who completed his game and vice versa. The very best of each of them came when working in an almost telepathic connection at Liverpool, perhaps the greatest testament to their status as one of the Premier League’s best partnerships.