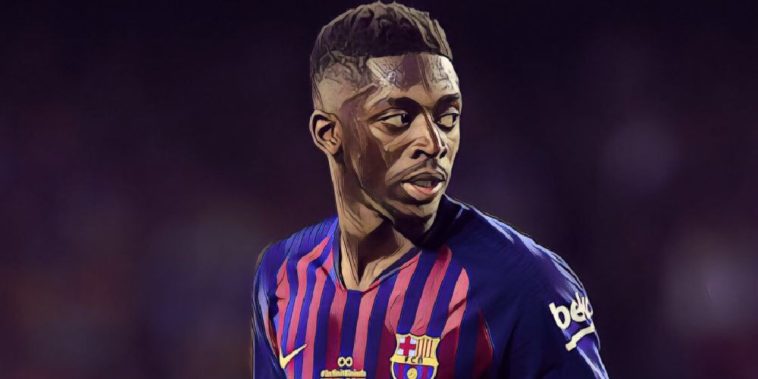 The summer long saga that has been Manchester United’s pursuit of Jadon Sancho has taken a new turn with the club now considering alternatives to the Borussia Dortmund winger, their refusal to meet his well-documented asking price leading towards a desperate late dip into the transfer market.

There are just days remaining of the transfer window and a new right-sided attacker is yet to arrive through the doors at Old Trafford, with Ole Gunnar Solskjaer sure to be frustrated by the lack of competence from the United hierarchy this summer.

After Dortmund – quite rightly – took a no-nonsense approach to United’s negotiating tactics and attempts to drive down Sancho’s asking price, the much maligned Ed Woodward is now reportedly fluttering his eyelashes in the direction of Barcelona star Ousmane Dembele.

The France international is a fine player when at full fitness, though his time with the Spanish giants has been littered with injuries as he’s struggled to fulfil his early potential.

As always the world of Twitter was on hand to react to United’s interest in Dembele, and we’ve decided to look at some of the best reaction to the potential deal:

After watching Sancho head towards the taxi rank, United are now seemingly searching for a plan B.

We have now reached the equivalent of the 3am lap of the nightclub just to see, on the off chance, if anyone might be around and interested.

It will take me about 3 minutes to pretend I don’t even know who Sancho is if we sign Dembele btw, my shamelessness has no limits 👍🏻

It’s proven a frustrating transfer window for both the Red Devils and manager Solskjaer, the Norwegian likely flummoxed by the club’s confusing negotiation tactics.

News of a reported move for Dembele has, at least, raised optimism amongst some supporters, with the prospect of the ambipedal Frenchman and Mason Greenwood a nightmare proposition for opposition defences.

Dembele’s fitness issues have led many to forget the talent of a player who cost in excess of £100m when signing for Barcelona three years ago, the winger a blur of speed and skill when able to operate at full tilt.

A reminder of what Ousmane Dembele is capable of ⚡

That injury record stands as a major concern ahead of any deal, however, and Dembele’s spells on the sideline have quelled some the optimism ahead of a potential move to Manchester.

If Woodward can make a breakthrough during negotiations with Barcelona it will provide Dembele with a chance to relaunch his career in the Premier League, provided the Frenchman is keen to do so, of course.

Although let’s be honest this seems the most likely scenario…

Manchester United insist they have not and will not make an offer to buy Dembélé. #FCB not interested in a loan deal if it doesn’t involve a buy option#FCB believe the reports of #MUFC wanting him on loan work to add pressure to Jadon Sancho and Borussia, their ultimate target

Read Also – Is Frank at fault? Why Lampard needs to look in the mirror when it comes to Chelsea’s deficiencies