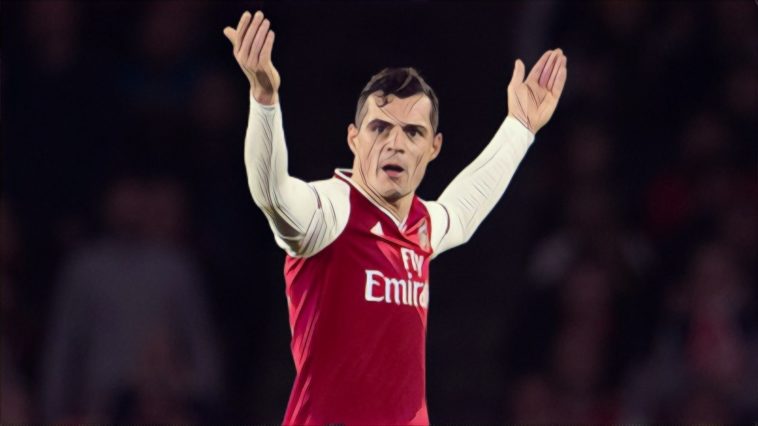 Pierre-Emile Hojberg has been stripped of the captaincy at Southampton after informing the club of his desire for a new challenge, the midfielder keen to quit the South Coast to fulfil his ambitions of winning major silverware and playing Champions League football.

Hojberg’s public lack of commitment to the cause has seen the Denmark international replaced as captain by James Ward-Prowse until the end of the season, his time as the Saints’ leader – and perhaps at the club – now appearing all but over.

The 24-year-old is not the first high-profile player to have been removed from one of football’s greatest individual honours, however, here are five times Premier League players were stripped of the captaincy:

The most recent inclusion in this feature, Xhaka was removed from his position as Arsenal captain earlier this season following an angry reaction to taunts from his own supporters.

Xhaka’s leadership qualities have been recognised from an early age with the midfielder having captained both club and country whilst still in his early twenties, though his move to the Premier League has seen the Switzerland international fail to develop as hoped.

The 27-year-old was appointed as club captain following the departure of Laurent Koscielny, however, it proved an unhappy period for the Gunners’ figurehead following a disastrous start to the season under Unai Emery.

Xhaka – whilst a popular figure in the dressing room – has long been a much-maligned figure for his performances, and tensions came to a head during a draw with Crystal Palace in October.

The midfielder reacted angrily to a chorus of boos from the Arsenal support and goaded the crowd as he left the field, cupping his ear and mouthing ‘f*** off’ before removing his shirt and heading down the tunnel.

Xhaka’s reaction saw him subsequently removed as captain and replaced by Pierre-Emerick Aubameyang, his long-term future remaining uncertain despite forcing his way back into the side after an initial exile.

William Gallas was undoubtedly a fine player throughout a Premier League career that saw him take in spells at London’s biggest clubs, but captain material he was certainly not.

Gallas memorably forced an exit from Chelsea by allegedly refusing to play for the club, even reportedly threatening to score own goals if the club selected him – a claim he has since denied.

He made the move to capital rivals Arsenal as a make-weight in the deal that saw Ashley Cole head in the opposite direction, bizarrely inheriting the number 10 shirt from Dennis Bergkamp and later being appointed as club captain.

His time as the Gunners’ captain saw him memorably sulk in the centre-circle after the costly conceding of a penalty against Birmingham, in addition to hitting out at his younger teammates in an ill-advised interview.

For a player who threw an on-pitch tantrum at St Andrew’s to call the rest of his side ‘not brave enough in battle’ proved the final straw for his captaincy, Gallas stripped of the armband and later forced out of the club – heading to north London rivals Tottenham.

Lehmann on Gallas: “Instead of standing at the edge of the area and clearing a possibly parried penalty like any other defender in the world, he abandoned the team, ran towards the halfway line and kicked an advertising hoarding.” pic.twitter.com/Rex4c7gEGh

Joey Barton has been called plenty of things throughout a colourful and controversial career, but there are perhaps few in footballing circles who would laud the bad-boy midfielder as a great leader.

Barton was appointed captain of a Queens Park Rangers side who spent significant money on an eclectic collection of talents, though their expensively assembled squad still found themselves at the forefront of a relegation battle during the 2011/12 campaign.

Heading to a Manchester City side who needed victory to secure the title on the final day of the season, QPR looked doomed but put up a resilient display at the Etihad, coming from behind to take a shock lead courtesy of goals from Djibril Cisse and Jamie Mackie.

Barton – not for the first time in career – would suffer a brain-fart of epic proportions and was sent-off for elbowing Carlos Tevez, before embarking on a personal mission to cause a riot by kicking Sergio Aguero and throwing a head-butt in the direction of Vincent Kompany.

Barton’s antics failed to have the desired effect as City kept their cool to hit back and win the title in stunning style, and it proved to be the end of his QPR captaincy following his brutish behaviour as he was hit with an unprecedented 12-game ban and shipped out on loan to Marseille.

Christopher Samba proved to be a bargain buy for Blackburn following his arrival from Hertha Berlin, the towering defender impressing at the heart of the Rovers defence during an impressive five-year spell at Ewood Park.

Samba’s imposing style saw him quickly become a firm fans’ favourite at the Lancashire side and his leadership qualities were later recognised with his appointment as captain, the centre-back promoted ahead of Ryan Nelsen despite the New Zealand international remaining with the club.

Samba continued to thrive during Sam Allardyce’s reign at the club to establish himself as one of the best defenders outside the division’s top six, though the arrival of Steve Kean as manager and continued speculation linking him with a move away saw Congo international seek a new challenge.

He handed a transfer request in at the club amid a rejected January bid from Queens Park Rangers, publicly declaring his desire to leave. Samba was subsequently stripped of the captaincy and never played for the club again, joining big-spending Russian side Anzhi Makhachkala the following month.

Perhaps the most notable example of a Premier League player being removed from the position, John Terry’s well-documented behaviour twice leading the Chelsea legend to being stripped of the England captaincy.

Despite being almost universally disliked Terry is recognised as one of the greatest defenders in Premier League history following a hugely successful career with the west London side, winning five league titles and the Champions League amongst an extensive collection of honours during his time at Stamford Bridge.

The centre-back appeared the perfect leader for the national side with his lion-hearted style of play and bravery, but his reputation came crumbling down following allegations of an affair with the girlfriend of Chelsea and England teammate, Wayne Bridge.

Despite that publicised infidelity, Terry regained the armband and looked set to lead the Three Lions at the 2012 European Championships, only to find himself at the centre of racial abuse allegations from QPR defender Anton Ferdinand – brother of long term England teammate Rio – just months before the tournament.

The Football Association promptly removed the defender from his position for a second time and he would never captain England again, manager Fabio Capello quitting his own position after publicly challenging the FA’s decision.

Read Also – Premier League refresh: Some of the best stats from the season so far ahead of the restart