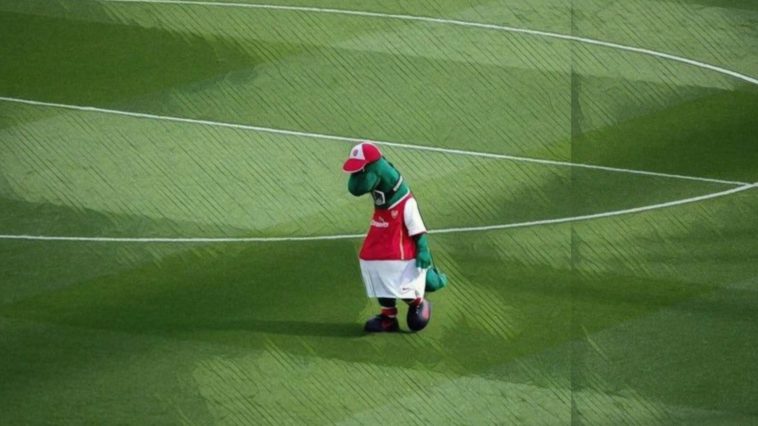 The funniest tweets from the world of football this past week, including the unceremonious sacking of Gunnersaurus, Edinson Cavani ‘scything’ through the Premier League, controversial pay-per-view matches, and peak Sunday League football.

The week got off to a terrible start when it was revealed that Jerry Quy had been relieved of his duties as Arsenal’s mascot.

Arsenal’s Gunnersaurus sideshow is further proof that morality is extinct

So what’s next for the green fella?

Surely Jerry comes back when the fans come back???? @Arsenal

So @Atalanta_BC, have we got place left for a new job? pic.twitter.com/YuRLYzN5pJ

One can only hope. pic.twitter.com/dd8FmG8QxF

At least this sage proves not all heroes wear capes.

I was so sad that Jerry Quy aka our famous & loyal mascot @Gunnersaurus and integral part of our club was being made redundant after 27 years. As such, I’m offering to reimburse @Arsenal with the full salary of our big green guy as long as I will be an Arsenal player… pic.twitter.com/IfWN38x62z

Gunnersaurus wasn’t the only high profile member of a London club to have his contract cancelled.

Incredible how West Ham are on the verge of cancelling Jack Wilshere's contract but the club you can most imagine signing him on a free transfer is still West Ham.

See you tomorrow. What time? Don't need to be getting fined day one 🤣🤫 https://t.co/Qw7jBe7ryg

The premier league is a farmers league, Cavani will be fine pic.twitter.com/W7Z8cyHZb2

Football fans had double reason to be angry this week when it was announced that non-televised Premier League games would be shown on pay-per-view channels at just under £15 a match.

Pay £14.95 to sit indoors & watch a Premier League game which is a sterile version of the game I played??? No thanks, you’re alright, I’ll go watch my local non league club, have a pint & chips & gravy & support my community #LetFansIn

Plausible scenario: fans demanding their PPV payment be refunded by the club after a hapless 6-0 home defeat.

At least nothing can beat the grassroots of the game.

I have seen a lot in Sunday league football, but this has to top it pic.twitter.com/76b6snEAxs

Northern Ireland have not won a game in 90 minutes of their Nations League campaign and are one game away from qualifying for Euro 2020.

Absolutely love that a Nations League group that ended like this has resulted in Northern Ireland beating Bosnia on pens to win a Euro 2020 play-off. pic.twitter.com/K6VeSqftgr

Scotland won their semi-final shootout, but there’s a catch.

The most creative football transfer reveals in 2020

Southampton put Spurs in their place.

These mockups are sensational.

A great gesture from Brandon Williams.

Hi Adam, how about I give you one of my shirts instead? https://t.co/McBVJpNe9f

And another classy one from Crewe Alexandra!

Honestly so speechless right now. I can't express how much this means to me #CreweAlex pic.twitter.com/yU1vBb06w7

I see the live stream is going well.

— Out Of Context League Of Ireland (@OutOfContextLOI) October 9, 2020

I wish I had the patience for something like this.

how it started how it’s going pic.twitter.com/tWAMcbGg1I

Read: Why has the Premier League been so unpredictable so far?