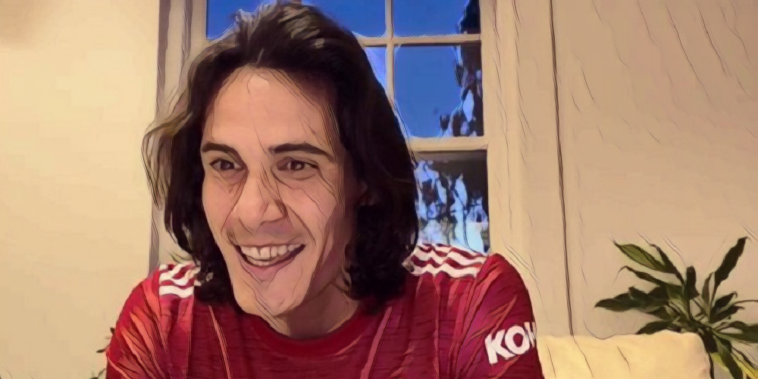 Manchester United new boy Edinson Cavani has set his sights on emulating some of the clubs greatest ever players, while admitting it is a ‘real honour’ to test himself in the Premier League.

Cavani has established himself as one of the games most prolific forwards, becoming PSG’s all-time leading goalscorer with a hugely impressive 200 goals in 301 games for the Parisien club.

Before his time in France, the Uruguayan spent six years in Serie A during spells with Palermo an Napoli, and the 33-year-old is excited about testing himself in the English top flight.

“Yes, absolutely, it’s my chance to come to the Premier League, which is a very attractive league to play in, and it’s right up there with the best leagues anywhere in the world,” he told manutd.com.

“For me that’s a real honour, an honour and a new challenge, which really excites me a lot, and I cannot wait to be able to start to feel what it’s like to play in the Premier League. I’ve been lucky enough to have played against a lot of English sides, but now it’s my turn to experience playing and competing every weekend and in every match in the English Premier League.”

Former Manchester United midfielder Ander Herrera recently revealed he urged Cavani not to miss out on the chance to move to Old Trafford, and the striker admitted that the Spaniard’s comments helped to convince him to join Ole Gunnar Solskjaer’s side.

“Yes, I spoke with Ander a lot, as well as other team-mates, like Angel Di Maria, who I was also with at Paris,” he said. “It was genuinely getting to the last minute and I called Ander to have a chat. I have a lot of admiration for Ander, for the kind of person he is and I had the feeling that his words were going to help me out, by telling me a bit about what it was like at United. And so, yes, it’s true that after I’d finished talking with Ander, we came to an agreement here with the club. I hadn’t known Ander for too long, but we formed and enjoyed a close friendship during that time at PSG, and today we are still very good mates.”

Cavani has been handed Manchester United’s famous number 7 shirt, a shirt number which had looked like it was being saved for a certain Mr Sancho.

The famed jersey has been made worn by a number of club legends such as George Best, Eric Cantona, David Beckham and Cristiano Ronaldo, though since Ronaldo’s departure to Real Madrid in 2009, a whole host of players have failed to live up to expectations having been handed the number 7 shirt, including Angel di Maria, Memphis Depay and most recently, Alexis Sanchez.

Edinson Cavani has been given the No. 7 shirt at Man United.

Since Cristiano Ronaldo left, their No. 7's have managed just 34 goals in 222 games 😬 pic.twitter.com/IZD7In0IDW

“It’s a great number, I got to wear it with the national team as well. But I honestly believe that the number you wear is more of an off-the-field thing. That’s where it counts for more. I know that once you’re out on the pitch, the number you have on your shirt has no influence. But when you get the chance to pull on the no.7 shirt at Manchester United, which has been worn by some top, top players who have been legends here in this country and at this club, it really is a nice responsibility to have. I enjoy challenges and, as I said to you, I hope that I can do it great justice and leave it in as high regard as the many great players who have worn this shirt before me.”

Cavani is set to miss out on Manchester United’s next game against Newcastle, the striker currently isolating as per government guidance having entered the country from France, though his debut could come against former side, PSG, in the Red Devils opening Champions League group game.