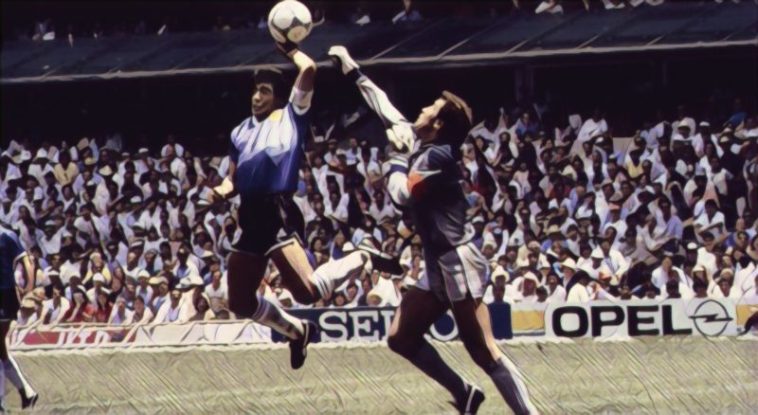 For football fans around the globe the wait is finally over as the 21st World Cup finals has begun. Football’s most prestigious tournament is truly the greatest show on earth, and it’s ability to bring football and non football lovers together in support of their Countries is just one of the reasons why it is such a special competition.

Over the years the World Cup has thrown up some of the most iconic sporting moments of all time, and while we all love to see beautiful goals and superstar players, sometimes it’s actually the moments of controversy that live longest in the memory. With that in mind we’ve decided to take a trip down memory lane and check out five of the World Cup’s most controversial moments …

In 2010 the World Cup was held in Africa for the first time. Whilst hosts South Africa failed to impress, Ghana advanced to the knockout stages where they met Uruguay in the last eight, aiming to become the first African nation to reach the World Cup semi-finals. A close affair had finished 1-1 after 90 minutes and remained tight during the extra period. As a penalty shoot-out approached, Luis Suarez, not for the first time, was at the centre of the controversy.

In the dying seconds of extra time, Suarez saw red for deliberately handling a goal bound effort on the line. Ghana striker Asamoah Gyan, with the chance to take his country to the semi-finals, blasted the resulting spot kick against the bar, as Suarez gleefully celebrated from the tunnel area. The whistle sounded for full-time and a penalty shoot-out followed, Uruguay winning 4-2 to advance to the last four. Suarez showed little remorse for his actions, blaming them on instinct, but the debate remained whether the controversial forward was truly a hero or a villain.

Arguably the most notorious challenge in World Cup history, French defender Patrick Battiston was knocked unconscious after a horror challenge by German goalkeeper Harold Schumacher. Michel Platini had played Battiston through on goal and Schumacher came rushing from his line. Despite comfortably reaching the ball first, Schumacher followed through with a reckless shoulder charge that rendered Battiston unconscious. The Frenchman lost two teeth and suffered three broken ribs in the incident, which remarkably Schumacher did not even receive a booking for.

As the French players gathered round the stricken Battiston and called for the stretcher, Schumacher simply stood waiting to take the goal-kick showing little remorse, his reaction perhaps worse than the grotesque nature of the initial challenge.

West Germany met arch-rivals Holland in the last 16 of Italia ’90 and a fiery encounter soon ensued. Their rivalry has grown since the Germans had defeated Holland in the 1974 final and tempers flared when they met 16 years later.

Rijkaard was booked for a scathing challenge on Jurgen Klinsmann which would see him miss a potential quarter-final. An angry Rijkaard stormed back into position and as he passed Klinsmann’s striker partner Voller, appeared to spit into his hair. The two began a verbal exchange and an angry Voller was cautioned as a result.

From the resulting free-kick, Voller clashed with Holland goalkeeper Hans van Breuckelen and an incensed Rijkaard appeared to stamp on Voller’s boot. Rijkaard was promptly shown a red card and to his bemusement, Voller was also dismissed. As a mystified Voller made his way from the pitch, Rijkaard again spat into his hair. A disgusting moment that is etched into World Cup history.

Having inspired France to World Cup glory in 1998, Zinedine Zidane was again his country’s inspiration in Germany eight years later. The midfielder, appearing for the last time as a professional before retirement, was the heartbeat of a French side that advanced all the way to the final in Berlin, where they met Italy for the right to become world champions.

Zidane nonchalantly scored an early penalty to put the French in front, before Italian defender Marco Materazzi leveled the scores. Extra time ensued and during the extra period, Zidane clashed with Materazzi. Jogging up the pitch in close proximity, the two appeared to exchange words, believed to be derogatory to Zidane’s family. Moments later, Zidane stopped, turned to face Materazzi and headbutted him in the chest. The referee, having not seen the incident, was informed by his fourth official and Zidane was dismissed with ten minutes remaining.

Italy went on to lift the trophy after winning a penalty shoot-out 5-3 and the iconic image of a desolate Zidane walking past the World Cup trophy was made. Zidane, for his part, showed little regret. He said “To him I cannot (apologize). Never, never. It would dishonor me. I’d rather die.”

It was a sad end to the career of arguably the best player of a generation.

A goal written into the football folklore, Diego Maradona became English football’s ultimate pantomime villain. England met an Argentina side inspired by their diminutive number 10 in the quarter-finals of the 1986 World Cup in Mexico. Maradona, regarded by many as the greatest player of all time, scored twice showcasing two sides of his game in an infamous tie.

England defender Steve Hodge intercepted a pass and flicked the ball back towards keeper Peter Shilton. As the ball hung in the air, Maradona had made his way into the penalty area and leapt to direct the ball past Shilton into the unguarded goal. Replays showed that Maradona had punched, rather than headed, the ball to put Argentina ahead. Maradona went on to score one of the World Cup’s great goals, beating five England players before scoring as Argentina progressed with a 2-1 victory before going on to lift the trophy. England, incensed by what they believed to be blatant cheating, exited the competition early.