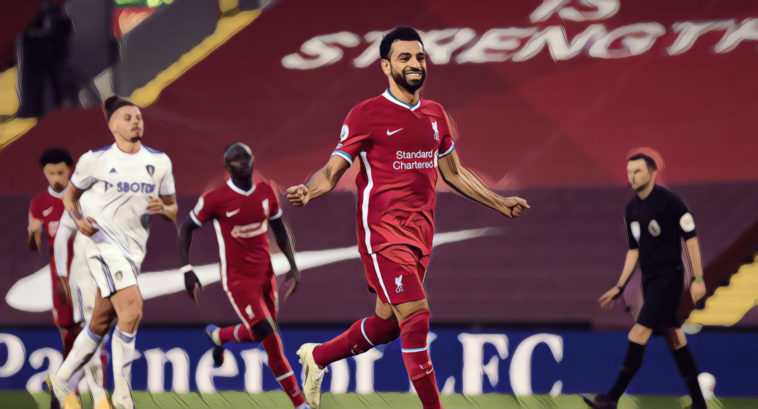 Premier League football will now take a break for the summer following the conclusion of the 2020/21 season, a campaign which had no shortage of incident, drama and entertaining contests.

The campaign began with a goal-fest over the opening weeks of the new season, the absence of fans initially made up for by some chaotic contests and shock results.

Manchester City overcame a stuttering start to establish themselves as the Premier League’s finest again, whilst there were positive seasons for Leicester, West Ham, Aston Villa and Leeds, the latter impressing on their return to the top tier.

As the dust settles on another unforgettable season, we’ve decided to look back at six of the best games from the 2020/21 campaign.

The very first fixture of the 2020/21 season proved to be an enthralling encounter between reigning champions Liverpool and newly-promoted Leeds, the visitors far from overawed as they went toe-to-toe with England’s best.

Liverpool led on four occasions in an end-to-end game at Anfield, one which was decided just two minutes from time as Mohamed Salah completed his hat-trick from the penalty spot following a clumsy foul from Leeds’ record signing Rodrigo.

Salah had opened the scoring from the spot after just four minutes before Leeds levelled through Jack Harrison, only for Virgil van Dijk to power home a header to restore the Reds’ advantage.

Patrick Bamford capitalised on a Van Dijk error to bring Leeds level for a second time, though Salah’s stunning second made it 3-2 to the hosts before the break, in a breathless opening 45 minutes that saw both sides’ defending leave a lot to be desired.

Mateusz Klich’s fine effort looked to have earned Leeds a hard-fought point on Merseyside, but Rodrigo’s rashness inside the box provided Salah with a chance to win the game in the closing stages.

VAR has taken plenty of headlines for all the wrong reasons this season, with the jury remaining out on the technology’s impact on the game in its current format.

Perhaps no fixture had more VAR drama than Manchester United’s thrilling win at Brighton in September, a game which saw the Red Devils awarded a penalty after the full-time whistle.

It was a bizarre end to an incredible game of incident, one which saw Brighton hit the woodwork a staggering five times before falling victim to Bruno Fernandes’ penalty 10 minutes into stoppage time.

Brighton had taken the lead through a penalty of their own that Neil Maupay converted, though United levelled just three minutes later through a Lewis Dunk own goal.

Marcus Rashford’s superb solo effort put the Red Devils back ahead, but Solly March’s 95th-minute equaliser looked to have rescued a deserved point for Brighton.

There proved one last sting in the tail for the Seagulls however, Maupay’s handball at the death sparking a VAR review following Chris Kavanagh’s full-time whistle, the referee then pointing to the spot to allow Fernandes to convert one of the latest goals in Premier League history.

The contest between Guardiola and his mentor failed to disappoint, as the two teams went head-to-head in a thrilling 1-1 draw at Elland Road.

Raheem Sterling opened the scoring with an excellent finish as Manchester City dominated the opening exchanges, attacking the Leeds goal on countless occasions as the newly-promoted side struggled to contain the visitors.

Leeds roared back however and began creating opportunities of their own, Ederson doing superbly to make saves from both Patrick Bamford and Luke Ayling.

The game opened up in the second half and Leeds got their equaliser through Rodrigo following Ederson’s error, securing a deserved point in a fixture that saw two of the division’s most watchable sides go all out for victory.

England’s top tier is often labelled as the most competitive major league in Europe, with upsets far from uncommon throughout the Premier League.

The opening weeks of the season saw several shock results of epic proportions however, as Leicester scored five to thrash Manchester City at the Etihad, and Tottenham hit Manchester United for six.

Perhaps the biggest shock came at Villa Park however, as Liverpool became the first reigning champions since 1953 to concede seven times in a top-flight league fixture, the Reds’ shortcomings exposed in ruthless fashion by a resurgent Aston Villa.

Ollie Watkins scored a hat-trick to announce himself as a new fans’ favourite of the Holte End, whilst Jack Grealish had a direct hand in five goals in an electric performance from the Villa captain.

Liverpool had won all three of their league fixtures heading into this clash, but this was an end to the champion’s aura as Villa ran riot in one of the most stunning scorelines in Premier League history.

Everyone loves a good comeback, don’t they?

Even by the Premier League’s standards, West Ham’s rescue act to secure a point at Tottenham was pretty special with the Hammers three goals down with just eight minutes remaining against their London rivals.

Spurs had raced into a three-goal advantage inside the opening 16 minutes, Son Heung-Min netting the first after just 45 seconds before Harry Kane’s double put the north Londoners in control and threatened an embarrassing evening for West Ham.

David Moyes’ side pulled one back eight minutes from time when Fabian Balbuena headed home, before Davinson Sanchez’s own goal set up a grandstand finish.

Gareth Bale – on his first appearance since returning to Spurs on loan from Real Madrid – missed a glorious chance to put the result beyond doubt, a costly error as a thrilling clash had an extraordinary ending.

West Ham rescued a point in the 94th-minute in truly stunning style, Manuel Lanzini scoring arguably the Goal of the Season from distance to spark wild celebrations.

Sometimes the best games come when there’s little at stake, the lack of pressure allowing two teams to thrive with the shackles off.

Newcastle’s home clash with Manchester City this month was one such occasion, the Magpies clear of relegation trouble and facing a City side that had just been crowned champions.

It proved an exhibition of attacking football as City twice came from behind to win a seven-goal thriller, Ferran Torres scoring a superb hat-trick for Pep Guardiola’s side at St James’ Park.

Torres’ brilliant treble made it a record 12 consecutive away victories for the 2020/21 champions, with Joao Cancelo also on target to cancel out Newcastle goals from Emil Krafth, Joelinton and Joe Willock.