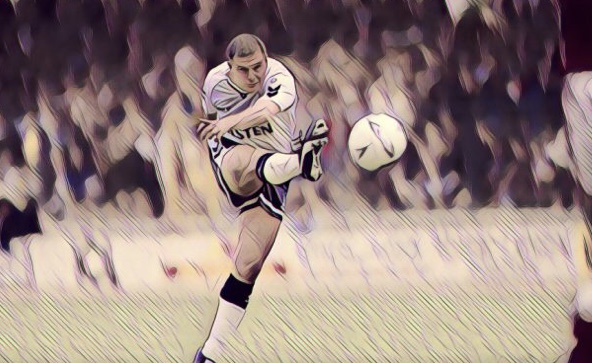 Paul “Gazza” Gascoigne was the most naturally-talented Footballer of his generation.

Ever since his heyday in the late eighties and early nineties English football has been perpetually searching for the next Gazza, they may aswell forget it – as these quotes will demonstrate there will never be another player or character quite like Paul Gascoigne.

( 1 ) He ate ice cream for breakfast, drank beer for lunch and when injured he blew up like a whale. But as a player? Oh, beautiful, beautiful. I loved that boy. He was a genius, an artist, but he made me tear my hair out.” Dino Zoff his manager at Lazio.

( 2 ) “If you’ve got that much natural ability, it doesn’t really matter how much the game moves on – he still would have been outstanding today. Gazza was one of the best dribblers and it was very difficult to get the ball off him. Phenomenal.” Matt Le Tissier

( 3 ) “He was always someone I looked up to for the way he played football, and how good he was. I still think, to this day, he’s the greatest England player.” Wayne Rooney.

( 4 ) “I first saw Gazza when he was 14. He was talented, but so slow we wondered if he could get round the pitch. But he grew, lost the puppy fat and became quicker. Very strong, with the vision, flair and character to go with it. The ideal footballer, technically and socially. Great value; never a dull moment.” Chris Waddle.

( 5 ) “Not only could he pick a pass but he could go past two or three players – he was a genius with that football at his feet. He was also great for the dressing room, what he would have been like at club level I don’t know. I am sure he would have been an absolute pain in the backside because turning up to work every day not knowing what you were going to get in the dressing room or on the training pitch might have been a nightmare for some players. But to have it once every once every four or five weeks as I did when we went away with England was great fun. He was a great lad and great to have around but first and foremost he was a great player.” Alan Shearer.

( 6 ) “What made him special was the lack of fear in his game. He would try anything, and he would never be scared that something would go wrong. And more than anything else, the love for showing off the abilities that he had, and that’s what lifts him above.” Gary Lineker.

( 7 ) “I witnessed Gazza from a young age and what an incredible player. His enthusiasm was so infectious and the whole squad took so much from him during Italia 90.” Peter Beardsley.

( 8 ) “He was the best player of his era, a breath of fresh air because he played with a smile. Around 1987, when Newcastle were bobbing above the relegation zone, we played them and my three central midfielders that day were Bryan Robson, Norman Whiteside and Remi Moses – all great footballers, and he just tore them apart. When he nutmegged Moses and patted him on the head, I was out of the dugout shouting, ‘Get that f****** so-and-so!’ Robbo and Whiteside were chasing him up and down the pitch, and they couldn’t get near him.” Sir Alex Ferguson.

( 9 ) “Paul Gascoigne is the special one.” Jose Mourinho.

( 10 ) “The crackerjack of British football. The most talented individual I’ve played alongside. Even when he got into the England side, he was not fazed by anyone he played against. He had a real arrogance on the pitch, and loved football. Mad as a March Hare, and brilliant to have around the squad. The reason why England haven’t gone to semi-finals and beyond recently is we haven’t had another Gascoigne.” Stuart Pearce.

( 11 ) “He had unbelievable ability and he could have won everything if he’d looked after himself. Everything could have been so different if he’d gone to Manchester United instead of Spurs.” Ian Wright.

( 12 ) “I played with him at Rangers and in his prime he was one of the best players in the world. He glided with the ball in a way that made him virtually untouchable for opponents and he was a match-winner, who had great technique when striking the ball. He was also a great entertainer – on and off the pitch! A tremendous natural talent.” Brian Laudrup.

( 13 ) “We all loved Gazza and there haven’t been many finer English players in my lifetime.  No one dropped their shoulder like Gazza.” Ray Parlour.