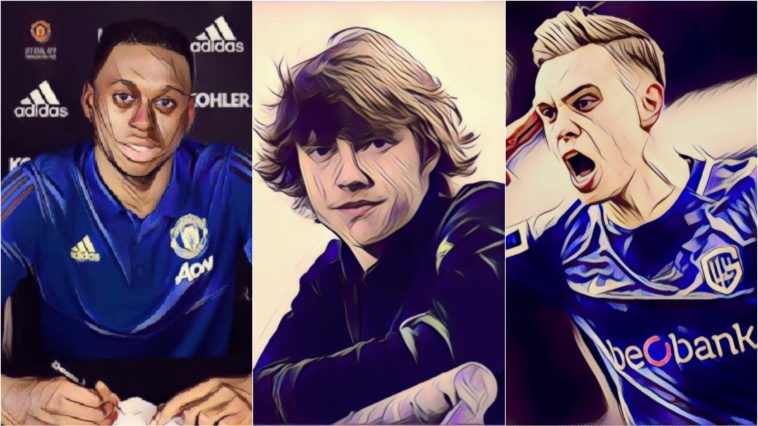 Manchester United finally got the cheque book out for a major transfer, Everton have Andre Gomes for keeps, Celtic get an exciting young prospect, while Brighton make their second signing of the summer.

Pre-season is soon to get underway at a number of clubs, if it hasn’t already, so clubs are trying to get the business done sooner rather than later so they have their newbies in time to bed them in before the new campaign begins.

Thus far 473 deals have been completed in this transfer window, totalling a mind-boggling £1.56bn. And we’ve still got potential deals for Neymar, Philippe Coutinho, Christian Eriksen, Paul Pogba, Romelu Lukaku and half of the Real Madrid squad to come.

We’ll be updating the biggest deals as they come in on The Football Faithful, so keep your eyes peeled in the coming days and weeks.

The biggest football transfers this week:

The Crystal Palace full-back’s move to Manchester United immediately makes him the second most expensive English footballer of all-time, and he could very well eclipse Kyle Walker thanks to football’s love of add-ons and bonus clauses.

If you’ve read what I have had to say on Aaron Wan-Bissaka in the recent past, then you’ll know I am a big fan. As I wrote back in April, the “Croydon-born defender is a menace going forward, but without sacrificing defensive solidity, which is a rare quality indeed.”

Old Trafford has become a death trap for big-name signings arriving on giant fees in recent years, but his arrival will add real dynamism to a United squad desperately lacking it.

Dynamism is not a term I would necessarily use to describe Andre Gomes, but I’m inclined to think that this is a decent piece of business by Everton.

The Spaniard had a slow start to his first season in English football, but just like the Toffees, he got better as the season wore on. His main attribute is being able to progress the ball forward, without doing much else, but it would be difficult to see the Merseyside outfit getting a player of similar quality for a better price.

By getting Gomes permanently, Everton keep the continuity of last season with a player who suits Marco Silva’s tactical approach, as well as continuing the trend of becoming the Barcelona of northern England.

Read: The greatest 40-year-old footballers in the history of English football

We already featured this transfer in a previous edition of this column, but the transfer was only just announced this week — and there’s a very interesting reason we are bringing it up here again.

Look at the tweet above and you might notice something; Marcos Llorente was given the number 14 by his new club, the same one worn by midfielder Rodri.

The Spaniard has been linked with a move to either Barcelona or Manchester City, with the latter looking the most likely to nab him. Surely this is a sign that he’s on the way out of Atletico Madrid, if not on his way to the Premier League? Stay tuned.

Read: Five of the Premier League’s most drawn out transfer sagas

? "It is unbelievable to sign for such a massive club, known all around the world."

We can’t say we have seen a huge amount of Luca Connell during his breakout year for Bolton Wanderers, but he impressed enough to earn a call-up to the Ireland squad last month.

Born in Liverpool, Connell featured in ten Championship games last season and can play in either midfield or in defence. If he can whip in balls like this on a regular basis then he will quickly become a favourite among the Celtic faithful.

Trossard will come into the Premier League as an unknown quantity, but he could be an arrival that fundamentally changes how Brighton play next season.

The Seagulls survived the last campaign, but they were a less-than-adventurous outfit who struggled to create goal scoring chances. This was exacerbated by the fact that the club brought in talented players, such as Yves Bissouma, but Chris Hughton underutilised them, which inevitably led to his sacking.

With Chris Potter now in charge, someone like Leandro Trossard could have a transformative effect. An attack-minded left-sided player, the Belgian provided 15 goals and seven assists for Genk, helping them win the Belgian Pro League in the process. He also scored an impressive eight goals in 11 Europa League appearances.

If he can make the step up to the English top flight, he could be a terrific signing for Brighton.