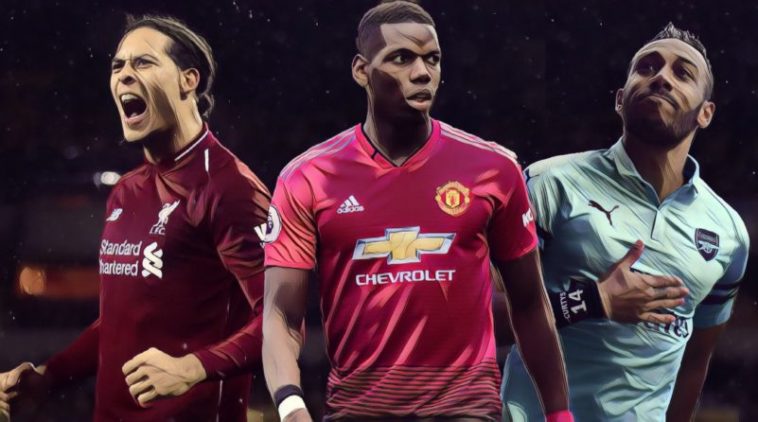 Big-money does not always guarantee big success. In the multi-billion pound industry that is modern football, records continue to fall as club’s splash more cash than ever before.

In fact, every Premier League club has shattered their transfer-record since 2016 with varying degrees of success.

Here are the record signings of the Premier League’s top six, and how they ranked after their mega-money moves…

Arsenal secured a club-record £56m for Borussia Dortmund forward Aubameyang in January 2018, after the Gabonese international had enjoyed a prolific spell in German football.

The 2015 African Footballer of the Year had scored 141 goals in 213 appearances for the Bundesliga side, and Arsenal hoped the forward would be a similarly reliable goal scorer after his arrival at the Emirates.

A goal on his debut would be a sign of things to come, as Aubameyang finished his first half-season in North London with ten goals in 13 Premier League appearances.

The following season, Aubameyang hit 32 goals in all competitions, including 22 in the league which saw him earn a share of the Premier League’s Golden Boot alongside Liverpool duo Sadio Mane and Mohamed Salah.

His Arsenal record currently stands at 41 goals in 65 appearances, a ratio of 0.63 goals per game.

The Spanish international became the most expensive goalkeeper of all-time after completing a move from Spanish side Athletic Bilbao to Chelsea in 2018.

Kepa arrived as a replacement for the departing Thibaut Courtois, and enjoyed a season of mixed success in his debut campaign at Stamford Bridge.

He caused controversy when refusing to be substituted during Chelsea’s League Cup final defeat to Manchester City, remaining on the field for the club’s penalty shoot-out loss and being dropped for his sides next fixture.

He secured a 3rd place finish in the @premierleague and wrapped up the @EuropaLeague title in his first season at @ChelseaFC, but it was not always plain sailing for Maurizio Sarri at the club…⛵?

Remember when Kepa refused to be substituted in the Carabao Cup final!? ? pic.twitter.com/32Sypfucnq

The goalkeeper would prove to be the hero in the same situation later that season, however, saving two spot-kicks in the club’s Europa League semi-final shootout victory over German side Eintracht Frankfurt, with Chelsea going on to lift the trophy by beating Arsenal in the final.

Kepa has shown enough in his debut season to suggest he could be a long-term fixture in the Chelsea side, the young goalkeeper likely to improve as he adjusts to the demands of English football.

Few signings have made as transformative an impact on a club’s fortunes as Liverpool’s capture of Van Dijk from Southampton in January 2018.

After a drawn-out process, Liverpool announced the signing of the centre-back as they attempted to strengthen their often fragile defence. What began as a weakness soon turned to a strength for Jurgen Klopp’s side, who reached the Champions League final that season before suffering defeat to Real Madrid.

The following season, Van Dijk helped Liverpool to the Premier League’s best defensive record as they narrowly finished as runners-up, being rewarded for his imposing performances by becoming the first defender since John Terry 14 years earlier to win the PFA Player of the Year award.

His success would not end there, Liverpool reaching a second successive Champions League final where they would meet Tottenham in an all-English affair in Madrid. The Dutch defender was named man of the match as Liverpool secured the sixth European Cup in their history, winning 2-0 to seal the first success of Klopp’s reign at Anfield.

Van Dijk is likely to prove a key figure as Liverpool look to end their long wait for a league title, should he help the club achieve that feat he may just earn full marks in our rating.

Having amassed a Premier League record 100 points in winning the top flight title in 2017/18, champions Manchester City decided to add to their wealth of attacking options with the capture of Leicester winger Riyad Mahrez.

The Algerian had played a key role in the Foxes shock title triumph in 2016, being named as the PFA Player of the Year, and moved to the Etihad in search of further silverware.

Mahrez will have to adjust to rotation having joined Pep Guardiola’s talent-stacked squad, having been a key figure during his time at the King Power Stadium.

The mercurial winger has the talent to succeed at the champions, and will hope for increased involvement during his second season in Manchester.

The Frenchman rejoined United in a then world-record £89m deal in 2016, four years after leaving the club to join Juventus on a free transfer.

Pogba had flourished into one of Europe’s most exciting midfielders during his time in Turin, helping Juventus to four consecutive Serie A titles. His return was the marquee addition following Jose Mourinho’s appointment at Old Trafford, as Manchester United looked to re-establish themselves amongst English football’s elite after several seasons of disappointment.

However, United have continued to struggle in the post-Sir Alex Ferguson era and his debut season saw the club finish sixth, though they did manage a League Cup and Europa League double, the latter success securing Champions League qualification.

The following two seasons have failed to see United challenge for major honours, though Pogba’s individual influence has statistically grown. In 2018/19 he finished as the club’s top scorer with 16 in all competitions, whilst he also led his teammates for assists.

United could perhaps have expected more following a world-record outlay and Pogba’s performances have drawn criticism at times during his second spell as a Red Devils player, often targeted for his failure to deliver his best performances on a consistent basis.

Despite Toby Alderweireld and Jan Vertonghen establishing themselves as two of the Premier League finest central defenders, Tottenham smashed their transfer-record with the capture of Colombian centre-back Sanchez from Ajax in 2017.

The towering defender had been with the Dutch side for just one season but had impressed during his spell in Amsterdam, attracting the interest of some of Europe’s leading clubs.

Spurs won the race for his signature and Sanchez featured regularly during his debut season, impressing as he started 29 league games for Mauricio Pochettino’s side.

He featured less during his second season, making just 22 league starts and was an unused substitute during Tottenham’s Champions League final defeat to Liverpool.

With Vertonghen and Alderweireld now both the wrong side of 30, the youthful and imposing Sanchez could yet prove a valuable member of the Tottenham squad for seasons to come, although he will need to cut out the erratic moments he has displayed at times.