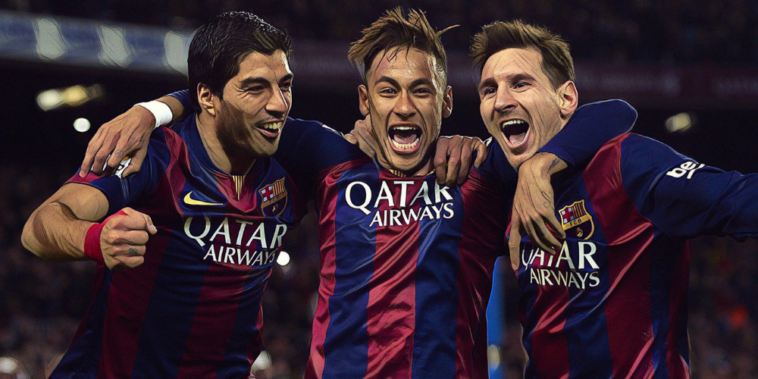 Lionel Messi’s move to Paris Saint-Germain has stunned world football, with the prospect of the forward adorning colours different to those of Barcelona now a reality.

Barcelona’s incredible mismanagement and dire financial situation has led to the departure of the club’s record goalscorer and greatest ever footballer, allowing PSG to secure a deal that would have been deemed unthinkable a short period ago.

Comparisons have already been made between the trio and fabled front threes of modern times, and we’ve decided to look back at some of the best attacking tridents of recent seasons.

Manchester United conquered Europe for a third time during the 2007/08 season, their success inspired by a front three that combined guile, graft and goalscoring genius.

Sir Alex Ferguson had overseen the development of two of football’s brightest prospects in Cristiano Ronaldo and Wayne Rooney, before adding Carlos Tevez to his options following the forward’s heroics at West Ham.

The summer signing instantly clicked with Rooney and Ronaldo as the Red Devils won a Premier League and Champions League double, with the front three scoring 71.8% of United’s goals that season.

Ronaldo led the way with a 31-goal league campaign – a total only since bettered by Mohamed Salah – and 42 in all competitions to win a maiden Ballon d’Or, whilst the trio’s combined 57 league goals was more than 14 of the other 19 Premier League sides scored in total.

Dimitar Berbatov’s arrival the following summer added another elite attacking option to the ranks, but it is the front three of Ronaldo, Rooney and Tevez that saw United play arguably their most exciting football of the past two decades.

Messi has formed part of some memorable attacking triumvirates during his time at Barcelona, with the Argentine first dovetailing alongside Ronaldinho and Samuel Eto’o during his first seasons in the senior side.

The combinations between Messi and Ronaldinho came during a period when neither player were at their best however, but the arrival of Thierry Henry from Arsenal soon paved the way for an iconic trio.

Barcelona secured the signing of the Gunners’ greatest goalscorer in 2007 and the arrival led to an exhilarating front three, as Pep Guardiola extracted the best from his forward options during an unforgettable first season in charge at the Camp Nou.

Utilising Messi in a false nine position with Eto’o and Henry as inside forwards, the trio combined for a century of goals as Barcelona won a historic Champions League, La Liga and Copa del Rey treble during the 2008/09 season.

Messi finished as the club’s leading goalscorer with 38 in all competitions to win a maiden Ballon d’Or, with Eto’o (36) and Henry (26) providing a stellar supporting cast.

Barcelona’s firepower had seen the Catalans largely dominate the landscape in Spanish football, though the formation of another formidable forward line fired Real Madrid to success both at home and abroad.

No strangers to record-breaking arrivals, Real Madrid made Gareth Bale the most expensive player in football history following his £85m arrival from Tottenham in 2013, uniting the Welshman with former record purchase Cristiano Ronaldo and Karim Benzema.

The trio’s first season together saw Los Blancos end a 12-year wait for European success and lift La Decima, before a period of unprecedented dominance in the Champions League era.

Real won four Champions League trophies in just five seasons, including becoming the first team to defend the trophy as part of three titles in succession.

Following another fine forward line featuring Messi alongside David Villa and Pedro, the Argentine united with fellow South American superstars Luis Suarez and Neymar during a devastating period at Barcelona.

Regarded as arguably the best front three the game has witnessed, ‘MSN’ scored an incredible 364 goals and provided 173 assists over a three-year period between Suarez’s arrival from Liverpool and Neymar’s 2017 departure to PSG.

Their run also included a Pichichi trophy each for Suarez and Messi as Spain’s leading scorer, the former the only player to break the Messi-Cristiano Ronaldo duopoly of the award over the past 12 seasons, following a 40-goal 2015/16 league campaign.

Liverpool’s successes in recent seasons have been spearheaded by their front three, with Mohamed Salah, Roberto Firmino and Sadio Mane having worked in perfect goalscoring harmony for much of that time.

Jurgen Klopp’s arrival as manager saw Firmino pushed further forward into a false nine position, before the signings of Mane (2016) and Salah (2017) assembled one of Europe’s best forward lines.

Firmino’s tireless pressing and link-play has set the tone for Klopp’s famed gegenpressing style, whilst his tendency to drop deep has freed space for the explosive talents of Salah and Mane drifting in from wide.

Salah has been the chief source of goals with two Golden Boot accolades and 125 in all competitions across four seasons, including netting a record-breaking 32 league goals during the 2017/18 Premier League campaign.

That season also saw the trio make history as Liverpool became the first team in history to have three players all reach 10 goals in a Champions League season.

Following Champions League and Premier League successes over the past three campaigns, Liverpool will hope their forward three can continue to fire in the upcoming seasons.