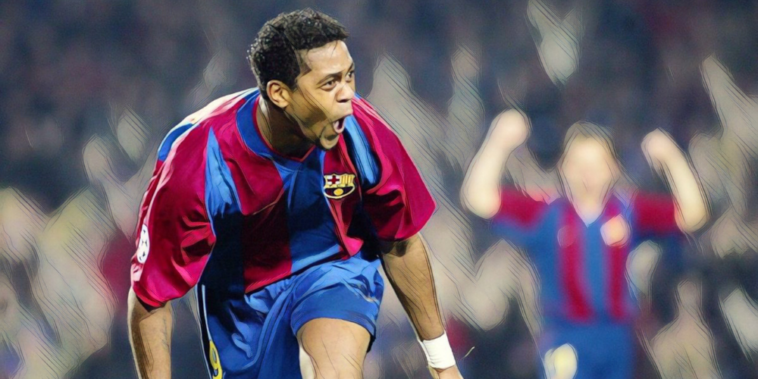 The 1990s were an unforgettable time for pop culture, music and sport, with football in particular seeing a memorable reboot following the formations of the Premier League and Champions League.

Fortunately for football fans across Europe, the decade also saw the emergence of some truly brilliant players and our latest series, 90s Hitmen, is set to profile some of the greatest goalscorers from an unforgettable period.

Our first fond trip down memory lane recalls the story of Patrick Kluivert, the boy wonder who remains etched into the folklore of the European game.

There has been no shortage of players to have ‘burst onto the scene’ (we’re not talking to you, Micah Richards) as precocious talents throughout the years, but few have had as instant an impact at the very highest level of club football.

Kluivert immortalised himself forevermore after becoming the youngest goalscorer in Champions League final history, and whilst that remains the defining image of his colourful career, there were many more chapters that make his story well worth revisiting.

Kluivert was born in the Dutch capital of Amsterdam, as the son of a Surinamese father and a Curaçaoan mother.

The Netherlands have a long history of producing players with Surinamese decent, from former iconic figures including Frank Rijkaard, Ruud Gullit, Clarence Seedorf and Edgar Davids, to more recent names such as Virgil van Dijk and Georginio Wijnaldum.

From an early age it became apparent that Kluivert had a natural gift and after being inducted into the fabled Ajax academy at the age of seven he began to rise rapidly through the ranks.

Few sides have produced players with such unerring regularity as Ajax, but even by the Dutch side’s lofty standards their generation of talent developed during the mid-nineties was something special.

Kluivert was one of just several starlets of a similar age – alongside Davids, Seedorf and Edwin van der Sar – who emerged simultaneously to form the backbone of an iconic side.

Handed the trust of manager Louis van Gaal, each were provided opportunities in the senior side, with Kluivert making an instant impression with a goal on debut during a Super Cup win against rivals Feyenoord.

The goal – stretching to meet Finidi George’s cross to double Ajax’s advantage – had all the trademarks of the finishing instinct that soon defined Kluivert’s career.

It would also be the start of a sensational first season in the senior side.

Kluivert scored the opening goal of Ajax’s Eredivisie campaign in a 3-1 win against RKC Waalwijk, before scoring a further four goals across the next three league fixtures as Van Gaal’s faith in his fledgling forward was vindicated.

Ajax’s season began in unbeaten fashion with nine wins from their opening 10 fixtures and the momentum failed to slow as the season progressed with Kluivert at the heart of the club’s success.

He scored 18 league goals in just 25 league appearances as Ajax completed the campaign without defeat, outscoring each of his more senior teammates in the Eredivisie.

Kluivert’s contribution to the cause also saw Van Gaal’s side make their mark on the continent, progressing through the Champions League group stage campaign undefeated, before beating Hajduk Split in the quarter-finals to set up a last four showdown with Bayern Munich.

A goalless first leg had left the tie in the balance, before Ajax produced one of their most memorable European displays to thrash the Germans 5-2 and reach the final.

It was here where Kluivert wrote his name into the history books.

Ajax faced holders AC Milan in the showpiece, a side which had thrashed Johan Cruyff’s Barcelona ‘Dream Team’ 4-0 in the previous season’s final.

Kluivert – still only 18 and in the midst of his first season as a professional – was omitted from the starting line-up, but was introduced with 20 minutes remaining, with the game tense and goalless.

The teenager made an immediate difference with his speed and willingness to chase down the Milan defenders, with his reward coming five minutes from time as the Rossoneri’s defensive line failed to trap the youngster offside.

Receiving Rijkaard’s pass just inside the Milan box, he ignored the option of the return pass to his senior teammate, keeping the coolest of heads to prod home a winner and crown Ajax champions of Europe.

🏆 Patrick Kluivert was the hero as Ajax were crowned champions of Europe #OTD in 1995 🏆#UCL | #UCLfinal pic.twitter.com/j1gUes8mh5

The scale of Ajax’s achievement should not be underestimated, a team centred around academy graduates and with an average age of just 24 had toppled the mighty Milan in club football’s biggest game.

The high of that success was soon followed by an incredible low, however, as Kluivert was convicted of causing death by dangerous driving following an incident in which his speeding car hit another vehicle.

The aftermath – which saw Kluivert handed 240 hours of community service – marred a productive second season for the forward, who hit 23 goals in all competitions as Ajax reached a second successive Champions League final, losing to Juventus on penalties.

The introduction of the Bosman ruling also contributed to a mass exodus as one of club football’s great modern sides was rapidly disbanded, with Kluivert following teammates Davids and Seedorf to Serie A in search of a new challenge.

He signed for AC Milan on a free transfer in 1998 – joining Davids at the San Siro – but it proved an unhappy period, with Kluivert scoring just six league goals as the Rossoneri slumped to a 10th place finish.

The following summer he formed part of the Dutch side that reached the World Cup semi-finals, before reuniting with Van Gaal in the colours of Barcelona following an £8.75m move the Camp Nou.

Back under the guidance of his compatriot in Catalonia, he struck up a superb understanding with Rivaldo as the two dovetailed delightfully to fire Barcelona to the Spanish league title.

Kluivert scored 16 league goals as the duo tormented La Liga defences in tandem, but the increasingly fractious relationship between Rivaldo and Van Gaal ensured the success and harmony did not last long.

Kluivert continued to fire despite the often chaotic environment around him, netting 25 goals in all competitions for three consecutive campaigns at Barcelona.

It was this time in Spain where we truly saw the best of Kluivert in terms of individual performance, an out-and-out goalscorer with a deep and diverse repertoire of finishes.

He finished as the joint-leading scorer as the Netherlands co-hosted Euro 2000, netting five goals including a scintillating hat-trick as Yugoslavia were thrashed 6-1 in the last eight, though he missed a crucial spot-kick as the tournament favourites bowed out in the last four to Italy.

Success proved similarly elusive at Barcelona despite the continued flow of goals from the Dutchman, who netted 122 goals in 257 appearances before being allowed to leave following five barren seasons without a trophy.

He signed for Newcastle on a free transfer with the Premier League his next port of call, cautious optimism surrounding St James’ Park at the signing of an elite forward still in his 20s.

This, after all, was the Netherlands’ all-time record goalscorer with 40 goals in 79 caps, but like many players before and since who burned bright early, his career had started to stagnate.

Kluivert netted 13 goals in all competitions during a sole season in English football, though the Magpies – who signed Michael Owen from Real Madrid in a club record deal that summer – opted not to renew his contract.

His latter years consisted of short spells at Valencia, PSV Eindhoven and Lille, but the prolificacy that had defined his game had started to desert the ageing forward.

It was somewhat of a whimper to end a career that had consisted of so much so early on, with few players having exploded in quite such fashion as a youthful Kluivert.

The speed, awareness and predatory instincts of his precocious talent had persuaded Ajax to overlook a deal for a teenage Ronaldo Nazario in the nineties, safe in the knowledge that one of their own was about to make his mark.

There can perhaps have been few who would have envisaged it being quite so soon.