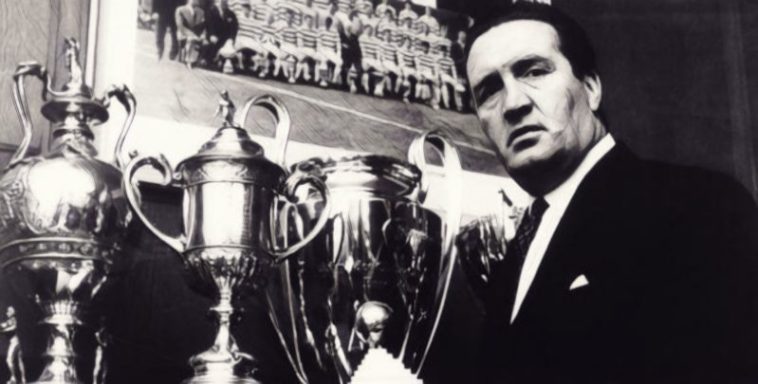 On the 5th of July 1975 in the early hours of the morning a Mercedes car heading North through Lockerbie on the A74 collided with another car driving the wrong way on the motorway.

On impact the driver of the Mercedes blacked out…paramedics soon arrived on the scene…inside the mangled wreckage they found the driver crushed against the steering wheel.

As they tried to resuscitate the elderly gentleman, they realised they were dealing with football royalty…there in front of their eyes was… Jock Stein.

That night Stein was returning from Manchester Airport after holidaying in Menorca with family and friends, when he crashed head-on on the north-bound carriageway.

With him in the car was his wife Jeanie, bookmaker Tony Queen and his friend Bob Shankly and his wife, the talk had been all about football from the airport.

The ambulance men managed to bring Stein around and removed him from the wreckage, an ambulance had arrived to take him to Dumfries and Galloway Royal Infirmary.

To Jock Stein, the twenty-five-minute journey to the hospital felt like an eternity, every bone in his body ached, as the ambulance bounced its way along the cobbled roads. The next morning the newspapers spoke of a nation’s horror as ‘Scottish Football Held its Breath’ with the man who had brought the European Cup to ‘Paradise’ fighting for his life.

Stein spent a fortnight heavily sedated and covered in bandages from head to toe with severe injuries. His friend Tony Queen lay beside him also fighting for his life, Queen who grew up in poverty in the backstreets of Glasgow had founded the Celtic Businessman’s club travelling the World with the Hoops.

Both would survive and cement their relationship through recovery and convalescing in hospital, neither could talk for many months due to injury, so they scribbled notes to each other.

During that recuperation, some legendary football names came to visit, including Bill Shankly who had recently retired as manager of Liverpool Football Club.

His fellow Scot would have Jock in stitches but the ‘Big Man’ in reminiscing about his recovery, could not even remember Bill being at his bedside, given the strength of the medication he was on.

As Jock lay in his hospital bed looking out at the Backend Road, the facility having been opened by the Queen that year, his mind wandered to matters on the football pitch. Would he return to management at Parkhead? Could he live without football?

The only time he had ever had thoughts of leaving football was due to his anger towards the hooligan element who he termed ‘The Wreckers…’.

In fact, on the 12th August 1972, Stein had had enough of the non-football chants coming from the Celtic contingent when the Hoops faced Stirling Albion at Annfield stadium in a Scottish League Cup tie.

Instead of a half-time team talk, Stein headed for the terracing to give a tongue lashing, with faces aghast all around him, he explained how the offensive chanting and singing would ruin the hard-won reputation of Celtic fans.

That reputation had grown since the World had seen the Green and White Army make the pilgrimage to Lisbon to conquer Europe, beating Inter Milan two to one on that famous May night five years earlier.

In their desire to get to the Estadio Nacional fans had travelled by boat, plane or automobile to witness big Billy McNeill lift the trophy, there were many tales.

In 2015 in the Mansion House, Dublin, former Galway All-Ireland hurling captain Joe Connolly told the story of his neighbour from the West of Ireland who made the journey via London.

On hearing the final whistle blow Joe’s neighbour made a beeline for the pitch and captain McNeill, as Billy was being carried shoulder high some of his jersey began to rip at the seams.

As Joe told the story to the audience including Lions Bertie Auld and John Clark, he pulled from his pocket the piece of Billy McNeill’s shirt… ‘it belongs in Galway now…’ he exclaimed to the audience.

Stein took the advice of Doctors’ to take a season out as manager of Celtic to convalesce and recuperate, he was in no fit state for the stresses faced by a football manager.

It was agreed his right-hand man Sean Fallon would take the hot seat; the two men had played together for Celtic during the fifties.

In roles reversed Stein had replaced Fallon as captain and never looked back, leading Celtic to victory in the Coronation Cup of 1953. Stein and the Celts were crowned champions of Britain in the unique tournament, defeating a litany of great British teams: Aberdeen, Rangers, Arsenal, Manchester United, Newcastle and Tottenham Hotspur and neighbours Hibernian in the final.

However, Stein’s crowning moment as a player saw him lift both league and cup for Celtic in the following season.

In 1957 he retired as a player plotting a career in football management, within twelve years after spells at Dunfermline Athletic and Hibernian, he took the reins at Celtic, a club then in crisis.

He had masterminded Lisbon and brought nine league titles in a row between 1966 and 1974, a feat never achieved before by a Scottish club.

Following that horrific day in July 1975, Stein spent 116 days away from Parkhead, however from afar he followed the team’s progress with emotion never interfering, as his wife Jeanie and family helped him with his recuperation, which proved slow.

That season was a difficult one for Celtic, alongside Stein’s absence, most of the great European Cup winning team had left the club including View Park’s wing wizard Jimmy Johnstone.

While new kid on the block Kenny Dalglish – a self-confessed Rangers fan – was proving a revelation at Celtic, the youngster was making soundings about going on the transfer list.

Sadly, in Stein’s absence their bitter rivals Glasgow Rangers made ‘hay’ winning a unique treble, defeating Celtic in the league cup and winning the league by six points.

The following season Jock Stein returned to a hero’s welcome and usual service was resumed as Celtic won a league and cup double, nine points was the margin between Stein’s men and their nearest rivals.

However, by season 1977-78 Jock Stein’s thirteen-year association with Celtic was to end, with a barren season. Celtic finished fifth in the league, the trophy cabinet would be bare that year with no European football the next season.

In March 1978, the full trauma of the car crash on the A74 was beginning to take its toll and Stein had intimated to the Celtic Board his desire to relinquish his duties.

Stein recommended his assistant Dave McParland for the job, but the Board had their eye on one of Jock’s Lisbon sons Billy McNeill who was making inroads at Aberdeen as manager.

In the Summer of 1978, as all eyes were on Scotland’s participation at the ticker tape World Cup in Argentina, Jock Stein stepped down, replaced by McNeill.

There was talk of Stein becoming General Manager overseeing football operations and becoming the first non-Catholic on the Board, however, this did not materialise.

The Kelly dynasty which ran Celtic at the time offered their greatest manager a so-called Commercial Manager’s role dubbed ‘a glorified pools salesman’ by the media at the time.

Stein said ‘No’ heading for Elland Road instead to take over Leeds United, like a scene from the Damned United he only lasted forty-five days, thereafter taking over as head coach of Scotland.

On the 10th of September 1985, his last day on this Earth, Jock Stein sat in the dugout at Ninian Park, Wales.

Scotland faced the Welsh in a World Cup playoff and after sixty-one minutes the game was scoreless as Stein summoned Rangers winger Davie Cooper from the substitutes bench to replace Aberdeen’s Gordon Strachan.

Exactly twenty minutes later Cooper stood with ball on the penalty spot, confidently he stroked the ball home past Neville Southall securing qualification to World Cup 1986 for the Scots.

Jock Stein’s life ended just as he had lived it – through the beautiful game.

Read Also – The Battle of Oriel Park: When The Troubles and football collided