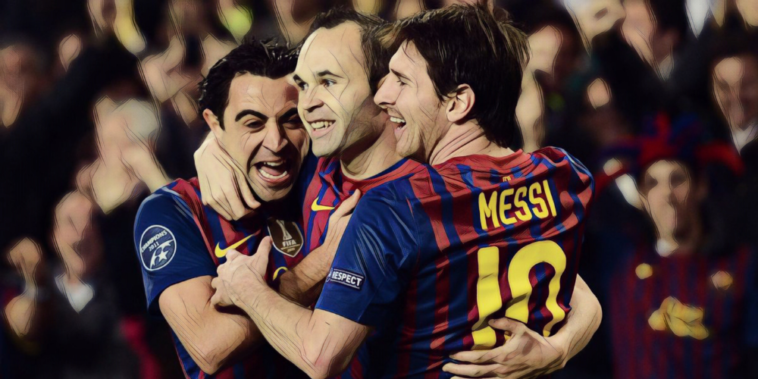 Lionel Messi, for many, is the greatest footballer to have graced the game. The Argentine genius is a record seven-time winner of the Ballon d’Or and has enjoyed a career that has scaled some unprecedented heights.

Record after record has tumbled as Messi has won every available major honour in club football, scoring at a ridiculous rate to cement himself as the greatest goalscorer in the history of both Barcelona and Spanish football.

Messi has been the figurehead for some of club football’s greatest ever sides, but the forward has had his fair share of elite talents as teammates in that time.

We’ve decided to look at the five players who have produced the most assists for Lionel Messi.

Perhaps an overlooked presence in the great Barcelona teams of the era, Pedro was a valuable contributor as the Catalan side conquered both at home and in Europe.

A graduate of the La Masia system, he broke into the side during the 2008/09 treble-winning season, but enjoyed a real breakthrough the following campaign as he scored 23 goals in all competitions.

That season saw Pedro become the first player to score in six different club competitions in a single season, having netted in the three domestic competitions, the Champions League, the UEFA Super Cup and the FIFA Club World Cup.

He shone as Barcelona won the Champions League in 2011, scoring the opener in the final win over Manchester United at Wembley.

The winger spent six seasons as a first-team regular at the Camp Nou and scored 99 goals in 321 appearances before joining Chelsea in a £21.4m deal.

He assisted Messi on 25 occasions during their time together as teammates and won 20 trophies during his career in Catalonia.

The heartbeat of the best Barcelona sides, Xavi was the midfield metronome who helped tiki-taka take over European football.

Xavi’s 767 appearances for the club are second only to Messi, a man who he provided 31 assists for during a lengthy career in brilliant tandem at the Camp Nou.

Having emerged from the La Masia ranks he would establish himself as one of the greatest midfielders the game has seen, winning eight league titles, four Champions League trophies and both World Cup and European Championship winners’ medals with Spain.

Xavi’s vision and passing range saw him become one of the finest playmakers of all time and he set a new assist record after creating 20 goals during the 2008/09 La Liga season, a feat since eclipsed by Messi (21 – 2019/20).

The Xavi-Iniesta axis is rightly one of the most lauded combinations in football history, the Spanish schemers having formed a unique understanding in Barcelona’s brilliant midfield.

Iniesta was often the conduit between midfield and the forward line, possessing a balletic grace as he skipped past challenges and threaded passes through opposition lines.

He provided 37 assists for Messi during their time as teammates and won every honour in the game, becoming the most decorated Spanish footballer of all time during his career at the Camp Nou.

An integral part of Barcelona’s two treble-winning teams, Iniesta often delivered in the biggest moments and holds the unique distinction of having been named man of the match in a Champions League, European Championship and World Cup final.

Dani Alves and Messi worked in brilliant telepathy down the right flank for Barcelona, the latter supported ably by one of the best right-backs of his generation.

Alves racked up more than a century of assists during his eight-season spell with Barcelona, with almost half coming for Messi as the two South Americans shared a sublime understanding.

😎 No-look through ball by Dani Alves to set up Messi #OTD in 2013 🤤#UCL | @FCBarcelona | @DaniAlvesD2 pic.twitter.com/bWFBWt2opj

Alves was a fine footballer at both ends of the pitch and his combinations with Messi – including quick inter-changes between opposition challenges – tormented full-backs for almost a decade.

The 38-year-old is the most decorated player in the history of football with 43 trophies at senior level and recently returned to Barcelona to boost the options available to former teammate Xavi in Catalonia.

Luis Suarez leads the way for assists provided to Lionel Messi, with the two South American superstars having formed part of an exhilarating forward line at Barcelona.

Suarez’s arrival from Liverpool saw him join forces with Messi and Neymar at the Camp Nou, the devastating performances of the trio firing Barcelona to treble success during the 2014/15 season.

The Uruguayan scored 198 goals in all competitions across six seasons with the Catalans, with only Messi and Cesar Rodriguez having ever scored more in Barcelona colours.

He won four league titles and the Champions League during a prolific period in Spain, which included outscoring both Messi and Cristiano Ronaldo to finish as La Liga’s leading scorer in 2015/16 after netting a staggering 40 goals from just 35 games.