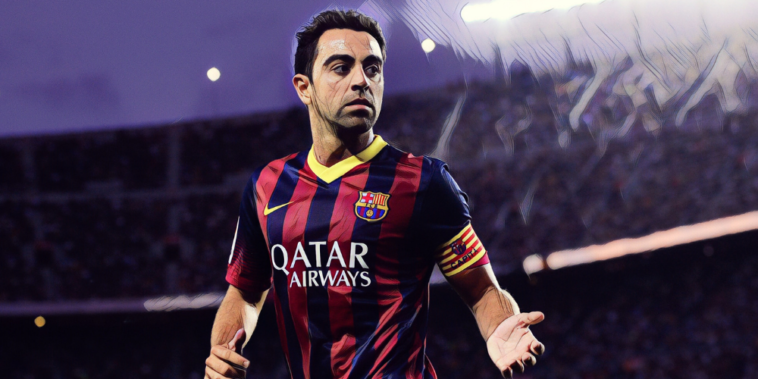 Xavier Hernández can claim to being the brain behind arguably the greatest side club football has ever witnessed. Perhaps a sentiment also true on the international stage.

Few players have ever been better exponents of the take the ball, pass the ball philosophy, the mantra behind Barcelona’s brilliance and Spain’s supremacy during an unforgettable footballing era.

Xavi was in essence the epicentre of a footballing ideology that delivered unprecedented success for club and country, the midfield metronome and beating heart of a side who passed opposition teams into submission.

Barcelona and Spain were the high priests of possession-based football and tiki-taka, their faith unbreakable. Each pass represented a patient approach to cracking the code, sapping energy from legs and frustrating tired minds.

When the combination proved correct, the vault burst open, passes scything through defensive lines as the ball, kept so relentlessly, was lent briefly to the back of the net.

Xavi’s education of course came from Barcelona’s fabled La Masia academy system, though – whilst talented – his was not a rise always destined to scale the heights he reached.

The midfielder’s diligence in possession and close control caught the eye as he progressed through the ranks in Catalonia, before making his debut as a teenager against Lleida in March 1998.

He scored his first goal in a Spanish Super Cup defeat to Mallorca in August, with his breakthrough season resulting in La Liga success for Louis van Gaal’s side as the youngster broke into a team featuring names such as Luis Figo, Patrick Kluivert and Rivaldo.

That success was not a prelude to what was to come, however, not at least in the immediate.

Van Gaal’s tenure came to an acrimonious end as financial issues and in-fighting led to a barren run for Barcelona, whilst Xavi struggled to find his role in the side and attracted criticism for the perceived lack of ambition in his passing range.

The departure of Pep Guardiola proved a hinderance rather than a help for Xavi, who initially failed to step into the role vacated in the Barcelona midfield.

Four seasons passed without silverware before the arrival of Joan Laporta breathed new life into the club, with the appointment of Frank Rijkaard as manager resulting in an upturn in fortunes.

Rijkaard’s introduction of a three-man midfield and the arrival of names including Ronaldinho, Samuel Eto’o and Deco saw Barcelona begin to rise, finishing as runners-up during the Dutchman’s debut season before ending the club’s wait for league title success the following season.

Back-to-back titles were secured as the Catalans emerged as Spain’s dominant force, with Xavi – now named as vice-captain – at the hub of the side and providing the penetrative passes into the magical feet of Ronaldinho.

Success also came in Europe as Rijkaard’s side were crowned Champions League winners, sealing just the second European Cup in Barcelona’s history as Arsenal were defeated in Paris.

Xavi – nursing an injury – remained an unused substitute for the showpiece, though his time would come on the grandest stages in both club and international football.

Barcelona’s rise had stoked a fire in their capital rivals and over the next two seasons Real Madrid returned the summit, the former unable to mount a sustained period of success despite the talent within their ranks.

Rijkaard was removed as manager with Laporta taking a huge gamble on his successor, appointing Guardiola as the new head coach in 2008 despite just a single season of experience with Barcelona B.

The return of Guardiola to the Camp Nou was a move that unlocked the true genius in Xavi, with the incoming manager having no uncertainty in how his former teammate fit into his philosophy.

Xavi had returned for pre-season under Guardiola with the property of a European Championship winners’ medal, as Spain ended three decades of underachievement at Euro 2008.

Luis Aragones’ side were imperious, thrashing Russia in their opening fixture before late wins against Sweden and Greece earned flawless knockout stage progression, before Italy were beaten on penalties in the last eight.

Xavi scored in the semi-final rematch with the Russians as Spain progressed to the final, where the match-winning moment fittingly centred around the soon-to-be-crowned Player of the Tournament, dissecting the Germany defence with a weighted pass in behind for Fernando Torres to crown Spain champions.

Spain’s football had previously been prided on a furious high-tempo intensity, but the nation’s La Furia Roja (The Red Fury) moniker was in the midst of a transformation, with the focus now on precise passing and possession as tiki-taka was introduced to the watching world.

The methods first honed at Barcelona had been transferred onto the international stage as fury was replaced by finesse, Spain’s evolution from raging bull to matador complete with Xavi at the centre of their success.

Xavi’s success at Euro 2008 was arguably the springboard for a period in which he became the game’s most influential midfielder, orchestrating a Barcelona team that reached new levels under Guardiola’s tutelage.

The 2008/09 season saw Barcelona embark on arguably the greatest season in club history. Bouncing back from a shock opening defeat to Numancia, the Catalans raced away with a remarkable run of form to establish a title lead they would not relinquish.

Guardiola had moved on the likes of Ronaldinho and Deco upon arriving at the Camp Nou, with the twin talents of Xavi and Andres Iniesta in midfield conducting the rhythm of a brilliant Barcelona side.

Arguably the highlight of the club’s run to the title was a 6-2 thrashing of arch-rivals Real Madrid at the Bernabeu, an emphatic El Clasico result that included a vintage Xavi performance.

Barcelona were four points clear and in pursuit of three major trophies at the time of the clash and bounced back after falling behind with a devastating performance.

Xavi finished the clash with four assists, each involving their own piece of genius. His first – a free-kick hoisted onto the head of Carles Puyol – showcased his set-piece quality, before his dispossession of Lassana Diarra in a dangerous area allowed Lionel Messi to score Barcelona third.

After a cutting pass from inside the centre circle to release Thierry Henry, his fourth and final assist was the best of the collection, a perfect pirouette taking both Fernando Gago and Fabio Cannavaro with him and freeing the space for Messi to make it five.

League title secured, Xavi scored as the Copa del Rey followed with a 4-1 thumping of Athletic Bilbao, before being named man of the match as Barcelona beat Manchester United to win the Champions League in Rome.

United were the holders and had eliminated the Catalans in the semi-final a season earlier, but Sir Alex Ferguson’s side failed to land a glove on Barcelona whose carousel of possession earned another European crown.

It was Xavi who created the champion’s second at the Stadio Olimpico, crossing for Messi to head home Barcelona’s clincher.

The trophies continued at a frightening rate, both in the colours of Barcelona and the national side.

Spain were crowned as world champions after success at the 2010 World Cup in South Africa, their brand of football once more unrivalled as Xavi led the nation’s magnificent midfield to the ultimate success in Johannesburg.

The Netherlands robust and uncompromising approach had threatened to unsettle the rhythm of Spain’s superior footballers in the final, but La Roja’s mesmeric possession claimed football’s biggest prize.

That period saw both Barcelona and Spain reign as two unstoppable forces, with a second Champions League trophy in three seasons arriving at the Camp Nou in 2011.

Manchester United were again the beaten final opponents in a spellbinding performance from Guardiola’s team, illuminating the hallowed turf of Wembley with a breathtaking brand of football.

The following seasons saw the winds of change sweep the club as the Guardiola era ended, with the late Tito Vilanova and Gerardo Martino each being handed the managerial baton.

Xavi Hernandez was a once in a lifetime talent. 🎩#StayHome #LaLigaSantander pic.twitter.com/j1N7vxqwkP

Spain continued to dominate the international landscape and added an unprecedented third major tournament in succession at Euro 2012, Xavi providing two trademark assists in the 4-0 thrashing of Italy in the final.

Xavi inherited the Barcelona captaincy following the retirement of Carles Puyol in 2014, spending what proved to be his final season as the leader of the La Blaugrana.

Having been persuaded to remain as another former teammate in Luis Enrique took the reins, it proved an inspired decision as Barcelona once again swept all before them.

The midfield domination of the Guardiola era had been replaced with a more front-footed style, as Xavi provided the ammunition for an exhilarating forward line containing Messi, Luis Suarez and Neymar, the trio scoring 122 goals combined as La Liga, Copa del Rey and Champions League success arrived in 2014/15.

The latter final – a 3-1 win against Juventus in Berlin – proved the fitting farewell for a Catalan icon, as Xavi hoisted aloft the Champions League trophy for a fourth time before waving goodbye to the club that had given him so much.

He too had given the club the best of his brilliance, with those who watched Xavi during his glorious late peak well aware that there will be no other.

Xavi represented tiki-taka in its purest form, a footballer who controlled and conducted games and whose passes not only found their target, but simultaneously with the instruction for his teammates’ next move.

The angles, accuracy, turns and technique, it all made Xavi both unique and unrivalled.

He was arguably Spain’s greatest ever talent, the midfield master who made opponents chase shadows and transformed how football was viewed.