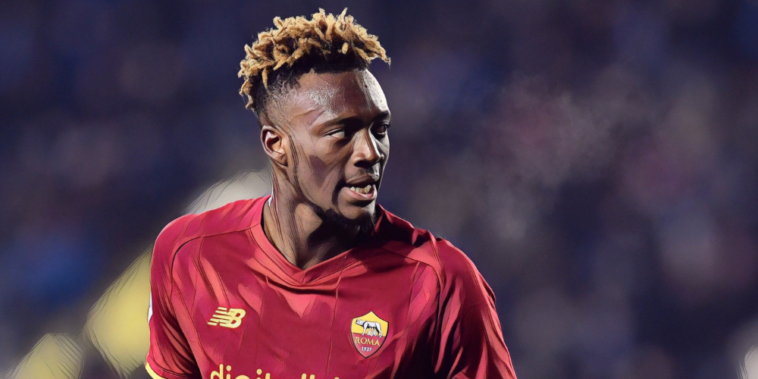 There was a time in which English players venturing abroad was a rarity, with the prestige and riches on offer in the Premier League seeing only a select few leave their domestic comfort zone.

An increasing number of talents are starting to head abroad in search of opportunity, however, with Tammy Abraham’s brace for Roma last weekend continuing his fine form since swapping Chelsea for the Italian capital.

The forward departed Stamford Bridge in search of regular football as he looks to keep his England ambitions alive and is one of several stars currently trying their luck on the continent.

We’ve decided to check in on the performances of some noticeable English names currently impressing across Europe’s top divisions.

Tammy Abraham has hit a rich vein of form for Roma in recent weeks, scoring 12 goals in his past 12 appearances for the Serie A side to continue his impressive debut season in Italy.

Abraham signed for Roma in a £34m deal from Chelsea last summer after falling out of favour in west London, the move across Europe having proven hugely beneficial as the 24-year-old has flourished under Jose Mourinho at the Stadio Olimpico.

Abraham has 17 goals from 26 starts across all competitions for Roma and has proven the perfect focal point for Mourinho’s attack, with his double against Empoli last weekend meaning the forward has now scored more Serie A goals (10) in a single season than any other English player in the three points per win era.

Tammy Abraham gets on the scoresheet for Roma! 🙌

Brilliant reactions to stop the ball and finish on the turn 👌

No English player can better Abraham’s 13 league goal involvements in one of Europe’s major leagues this season and his move to Serie A has boosted his hopes of cementing a place in Gareth Southgate’s squad ahead of the World Cup in November.

Chris Smalling’s impressive loan spell at Roma in 2019/20 saw the Serie A side secure a permanent deal for the centre-back, following a frustrating period at Manchester United.

Injuries hindered Smalling’s ability to make an impact last term as he started just 13 league games, whilst the arrival of Jose Mourinho at Roma last summer raised doubts over his future with the club.

Mourinho has previously been critical of Smalling’s ability in possession during their time together at Manchester United, but he has returned to prominence following a hamstring injury earlier in the campaign and has started nine of the club’s past 10 league fixtures – scoring in wins over Spezia and Atalanta.

Ainsley Maitland-Niles is the latest English player to sign for Roma, joining Abraham and Smalling at the capital club after signing on loan from Arsenal this month.

The 24-year-old had started just two league fixtures this season for Arsenal, with the Gunners allowing the versatile star to depart in search of first-team football with Maitland-Niles having since started four consecutive games for Roma since his arrival.

Having previously declared his desire for a midfield role, he has been used at full-back and wing-back under Mourinho in Rome. Maitland-Niles won five caps for England in 2020 as a wing-back and it is perhaps the position that maximises his attributes, having endured an indifferent loan spell in a central role at West Brom last season.

Fikayo Tomori has enjoyed a fine period since swapping the Premier League for Serie A, the defender signing for AC Milan after falling out of favour at Chelsea.

Tomori broke into the side under Frank Lampard before dropping down the pecking order, joining Milan on an initial loan deal and impressing to earn a permanent £25m switch to the San Siro.

After a positive first year in Rossonero, Fik is ready for a great 2022 🔝
Watch his interview ahead of #MilanRoma 👀

The 24-year-old is another who will be hoping to earn Gareth Southgate’s trust ahead of Qatar 2022 after describing the past year at Milan as the best of his career to date.

“It has been probably the best year of my career,” he told Milan TV.

“I have managed to play for Milan, in the Champions League, I am happy with everything, the club, the city, the fans and how everyone treats me.”

Jude Bellingham has become a leading target for the Premier League’s biggest sides following his breakthrough at Borussia Dortmund, the midfielder having shone since swapping the Championship for the Champions League.

Bellingham followed the path set by Jadon Sancho in leaving England for the Bundesliga, signing for Dortmund in a £25m deal from Birmingham City.

He is set to earn Dortmund a huge profit on that investment when the time eventually comes for him to depart with the 18-year-old amongst the most exciting talents in European football.

Bellingham has already amassed 118 senior appearances at club level and has earned 10 caps for England, whilst he has shone this season with four goals and nine assists in all competitions for Dortmund. Incredibly, he’s doesn’t turn 19 until the summer.

Bayern Munich completed the shock signing of Omar Richards last summer, securing a deal for the Reading full-back after his contract expired with the Championship side.

The move represented a huge leap for the 23-year-old – who had never played top-flight football before this season – as he was signed to provide competition and cover for Alphonso Davies at the Allianz Arena.

He has made 13 appearances for the Bundesliga champions so far this season, though just three of those have come from the start.

Richards enjoyed a stunning start in terms of team success at Bayern, with the Bavarians winning each of the first six fixtures he appeared in, scoring an astonishing 37 goals in the process.

With the likes of Joshua Kimmich, Thomas Muller and Robert Lewandowski as teammates, Richards is in the ideal environment to develop his game.

Stephy Mavididi is attracting interest from the Premier League after impressing on the continent, the former Arsenal youngster having shone since signing for Montpellier.

Mavididi became the first English player since David Platt to feature for Juventus in 2019, before signing for Montpellier in a permanent deal worth €6.3 million in 2020.

He scored nine league goals during an impressive first season in Ligue 1 and has taken that form into the current campaign, registering eight goals and three assists in 20 league starts this season.

West Ham, Aston Villa and Newcastle have all been linked with the 23-year-old who has featured predominantly from the left flank for Montpellier in 2021/22.

Angel Gomes was backed for a huge future after emerging from Manchester United’s academy ranks, becoming youngest player to play for the Red Devils since Duncan Edwards in 1953 when making his senior debut in May 2017.

He failed to breakthrough as hoped across the following seasons, however, making just 10 first-team appearances before choosing to walk away on a free transfer in 2020.

Gomes signed for Lille before joining Boavista on a season-long loan deal, scoring six goals and providing three assists during a productive campaign with the Portuguese side in 2020/21.

The 21-year-old returned to Lille last summer and scored his first goal during a Champions League win over Wolfsburg last month, with the England u21 midfielder having made 15 appearances (eight starts) for the French champions this season.

Another name linked with a return to the Premier League after impressing in Europe, Noni Madueke has taken his chance after signing for PSV Eindhoven.

The teenager scored seven goals and provided four assists in the Eredivisie last season, despite just seven of his 24 appearances having come from the start.

Madueke made his debut for the England u21 side at last summer’s European Championship and has been tracked by several leading clubs, with the former Tottenham youngster having scored six goals in 18 appearances so far this term.

The 19-year-old is direct and prefers to come inside from the right onto his stronger left foot. In August, he scored twice as PSV thrashed champions Ajax in the Johan Cruyff Shield.