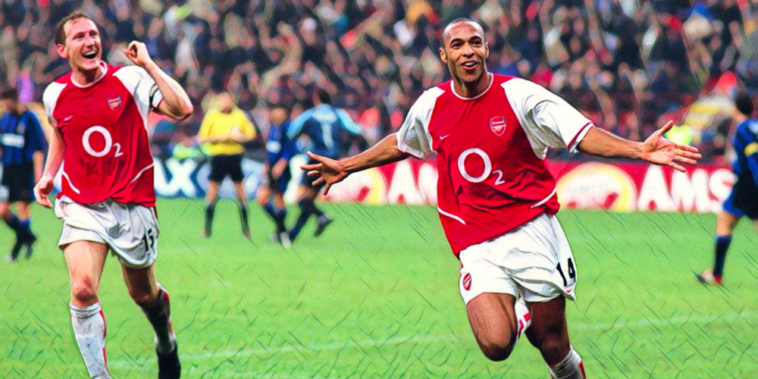 Thierry Henry was arguably the embodiment of Arsene Wenger’s Arsenal.

From the unremarkable manner of his arrival, to the unforgettable stamp he placed on the Premier League, Henry was the poster-boy of Arsenal’s golden era under his coaching compatriot.

The imagery of Henry in the famous red and white colours, all verve and va va voom, is among the most iconic of the Premier League era.

It was perhaps fitting that at the time of his unveiling in north London the club’s shirts were sponsored by Dreamcast. He was, after all, a footballer who produced moments and performances which were more reminiscent of a video game than elite-level professional sport.

For all their brilliance domestically, however, European honours proved elusive and there’s a strong argument that Wenger’s side underachieved on the continent. Arsenal reached the Champions League final in 2006 and were unfortunate against Barcelona in Paris, but in truth, their title-winning team was already nearing the end.

Two years earlier, Arsenal had entered the Champions League with grand ambitions. However, despite beginning the Premier League campaign without defeat, their European season began in disastrous fashion.

Inter Milan had humbled the Gunners with a 3-0 win at Highbury, a ruthless performance from the previous season’s semi-finalists securing a convincing result in north London.

Arsenal then failed to win against both Lokomotiv Moscow and Dynamo Kyiv, before a late Ashley Cole winner in the reverse fixture against the Ukrainians narrowly kept their continental campaign alive.

Matchweek five brought a return with Inter Milan and Arsenal travelled to the San Siro knowing defeat would eliminate them from the competition.

In a game of huge importance, it was Henry who rose to the occasion with one of his most devastating displays.

The left-sided triumvirate of Ashley Cole, Robert Pires and Henry was a hallmark of Arsenal’s most aesthetic football, as the trio forged a formidable understanding.

Arsenal opened the scoring against the run of play at the San Siro with all three in combination. Cole found Pires in space, before the winger looked inside to his compatriot.

Henry’s initial thought was to divert Pires’ pass back into the path of the buccaneering Cole, though the left-back immediately returned the favour. Henry’s finish was firm and first time, placed to perfection inside Francesco Toldo’s far post. 1-0.

Inter issued a response and within eight minutes were level. Christian Vieiri’s strike took a wicked deflection off Sol Campbell, a freak setback for an Arsenal side in the ascendency.

The half-time whistle blew with the sides level, and Arsenal headed back to the Giuseppe Meazza Stadium dressing rooms knowing there was work to be done.

Henry at his best was a forward who changed perceptions of centre-forward play, almost rarely central and willing to drift wide to create openings. Lethal around goal, he was almost unstoppable when running at full flight, the ball glued to his feet as he turned up the accelerator.

Arsenal’s second goal of the game came from Henry’s favoured channel down the left. Four minutes after the break he picked up possession and floated forward with the Inter defence in worried retreat. Neither Marco Materazzi or Iván Córdoba were willing to commit to a challenge, back-peddling towards the hoped sanctuary of the 18-yard box.

Feigning inwards onto his favoured right foot, the Frenchman chopped back down the left, his dummy leaving both opponents fooled and providing the room to squeeze a centre into Freddie Ljungberg. The Swede made no mistake from close range and Arsenal were back ahead.

The two sides exchanged punches across the following half an hour, before Henry found the decisive knockout blow.

Inter – pushing for an equaliser with just six minutes remaining – swung in a corner, but found only the imposing figure of Sol Campbell who hooked the ball high into the evening sky. Ray Parlour – stand-in captain in Patrick Vieira’s absence – met the second ball and cushioned a header towards Henry.

Inter had committed men forward and Henry found himself up against Javier Zanetti in a foot race. It was one he was never going to lose. Despite receiving possession well inside his own half, he burst into the open space with the electricity that defined his game.

Henry was forced wide and checked his run in search of support on the edge of the area, but with a pass to Pires unfeasible took matters into his own hands. Shifting the ball past Zanetti once more, he lashed home a left-footed finish across goal and in off the far post.

Henry headed towards the travelling contingent of Arsenal fans, arms outstretched to soak in the acclaim. As he finished his celebration in trademark knee slide, those on the terraces rose to salute the finest forward in world football at his breathtaking best.

The result was finalised, but the performance of Arsenal and Henry had more to come. Ashley Cole’s cross-field path found Henry, this time looking to wreak havoc from the right.

An adherent first touch brought the ball under instant control and Henry looked to pick out one of three red shirts bursting forward to join him. The ball evaded the run of Freddie Ljungberg, but found the onrushing Edu who slammed in the visitor’s fourth.

Arsenal had dismantled Inter Milan in their own backyard and Henry had been involved in each of their goals. There was still time for Pires to score a fifth, with Henry joining in the jubilant celebrations from the touchline, having been withdrawn to a standing ovation moments earlier.

Arsenal had taken apart a giant of the continental game in truly awe-inspiring fashion, inflicting the Nerazzurri’s heaviest home defeat in 47 years. ‘Five-one in the San Siro’ echoed around the famous ground, an almost disbelieving ode to the ‘One-nil to the Arsenal’ chant.

That terrace chant became popularised during an era in which the Gunners’ success was built on fort-like resistance, a period which seemed a world away from the football produced in Milan.

Arsenal’s subsequent exit to Chelsea in the quarter-final and the club’s ‘Invincible’ league campaign mean memories of their win at Inter are only occasionally revisited, but a sparkling showing in the San Siro was undoubtedly one of Thierry Henry’s greatest games.

Irresistible, exciting and attacking, this was Wenger’s vision in its purest form. At the centre of it was Henry, a forward talented enough to turn a footballing philosopher’s dream into reality.