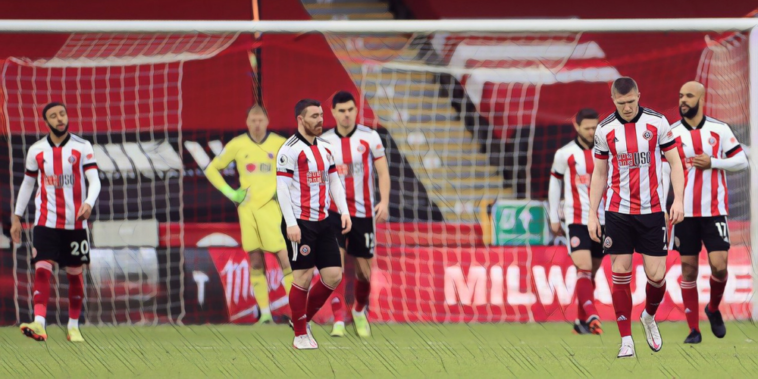 Sheffield United’s brilliant return to the Premier League was one of the stories of the campaign last season, the newly-promoted outfit competing for a place in Europe throughout before finishing a highly respectable ninth.

It’s been a different story this time around for the Blades, however, whose 1-0 defeat to Wolves this weekend confirmed relegation to the Championship with six games still remaining following a disastrous campaign.

Their struggles have been amongst the worst ever top-flight cases of ‘second season syndrome’ – a notion that promoted teams perform worse in their second year in the Premier League.

Following the Blades’ relegation we’ve decided to look back at some of the most memorable sides to have suffered a dip, here are the five worst cases of ‘second season syndrome’ in Premier League history:

Arguably the most notorious case of ‘second season syndrome’, Ipswich were regarded as favourites for relegation upon their return to the Premier League ahead of the 2000/01 campaign.

George Burley’s side had finished third in the second tier before overcoming Barnsley in an entertaining play-off final, though few envisaged much more than a season of struggle for the Tractor Boys upon their promotion.

Those assumptions were soon found to be hugely misplaced as Ipswich upset the odds to enjoy a stunning season in the Premier League, a side propelled by the goals of Marcus Stewart as high as third in late April before eventually finishing fifth to seal qualification for the UEFA Cup.

It was an incredible feat from Burley’s side with the Scot named as the Manager of the Year, though one that was unable to be replicated as ‘second season syndrome’ hit in spectacular style.

Ipswich won just once in their opening 18 league fixtures to find themselves mired in the relegation places, before a mid-season revival – including seven wins in eight fixtures – offered hope of survival.

It proved a false dawn as another dramatic downturn in form saw the club relegated, a 5-0 thrashing at Liverpool on the final day confirming their drop into the second tier just a year after reaching the dizzying heights of fifth.

Burley’s side did secure qualification into the UEFA Cup for a second successive season through their Fair Play ranking, though it is likely to have offered little solace following a rapid fall from grace.

Wigan earned promotion to the top flight for their first time in their history during the 2004/05 season, finishing as runners-up to Sunderland in the Championship to seal a place amongst England’s elite.

After narrow 1-0 defeats to Chelsea and Charlton in their opening two fixtures, Paul Jewell’s side embarked on an incredible run of form that saw Wigan win eight and draw one of their next nine fixtures to rise to second in the Premier League.

Those who had dared to dream of Champions League qualification may have ultimately been disappointed as The Latics eventually finished tenth, though a top-half finish far exceeded pre-season expectations.

Wigan’s fearless first venture into the Premier League failed to carry on into their second season, however, beginning the campaign in unconvincing fashion and failing to truly put distance between themselves and the bottom three.

A run of eight consecutive defeats throughout the festive period raised fears they could drop back into the Championship, only to survive following a dramatic winner-takes-all showdown with Sheffield United on the final day.

Reading romped to the Championship title in record-breaking fashion during the 2005/06 season, earning a first-ever promotion to the top flight after recording the highest points total gained in a professional league season with 106.

The momentum and confidence from that history-making campaign continued despite the step-up in quality upon arriving in the Premier League, winning on the opening day against Middlesbrough and winning four of their opening seven fixtures.

Steve Coppell’s side continued to compete throughout and enjoyed a fine run of form following the turn of the year, thrashing West Ham 6-0 on New Year’s Day to start a six-game unbeaten run.

Reading spent almost the entirety of the season in the top half before finishing a respectable eighth, though their form deteriorated drastically during a woeful second half to their second season in the Premier League.

Coppell’s side lost a club-record eight consecutive games to free-fall towards the relegation places, a 4-0 win at Derby County on the final day not enough to salvage their season, Reading relegated to the Championship on goal difference.

Birmingham had been looking to end a yo-yo existence between the top flight and second tier upon securing promotion ahead of the 2009/10 season, their third promotion to the Premier League in just eight seasons as they struggled to consolidate themselves at the highest level.

Alex McLeish bolstered his promotion-winning side with a series of sensible additions including the likes of Scott Dann, Lee Bowyer and Barry Ferguson, with Birmingham enjoying a fine return to the top tier.

The highlight of their season was a 12-game unbeaten run that included spirited draws with Manchester City, Liverpool and Manchester United, briefly flirting with the prospect of securing European football.

Birmingham finished the season in ninth despite winning just one of their final 10 games, and it proved a habit difficult to shake during the following season.

McLeish’s side finished as the lowest scorers in the division and just won eight games for the campaign to finish 18th, five defeats in their final six fixtures confirming their drop into the Championship.

It proved a bittersweet season for the Blues who won a first major trophy since 1963 with League Cup success, Birmingham becoming the first team in history to win a major trophy and be relegated from the Premier League in the same season.

Sheffield United are the latest side to suffer from ‘second season syndrome’, defeat to Wolves confirming their return to the Championship this weekend.

Chris Wilder’s side were lavished with plaudits last season following a campaign in which they upset the status quo to spend much of the season in and around the top six, their innovative system winning admirers as they made a mockery of their status as pre-season relegation favourites.

Their ninth-placed finish was their highest in 28 years and was a just reward for a fantastic campaign, though their achievements were unable to be replicated in 2020/21.

The Blades won just one of their opening 19 fixtures of the season, with Wilder departing the club in March as the threat of relegation loomed large.

The methods which worked wonders last season have faltered this season with Sheffield United picking up just four wins for the campaign, their return to the Championship confirmed against Wolves after a run of nine defeats in their past 10.