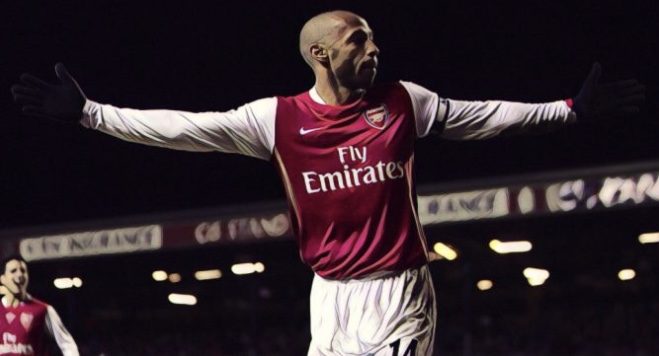 Well, where to start? The French seem to have a habit of coming across the English Channel and performing at the highest level.

There are so many to choose from that we must start by giving a special mention to some of those who didn’t make the cut. Claude Makelele, Robert Pires, Frank Leboeuf, Fabian Barthez, Marcel Desailly, Hugo Lloris, Emmanuel Petit, Patrice Evra and many more.

When you see who has missed out, you know that this is going to be a pretty special list. So sit back, pull up a chair, and enjoy. Here are our five of the greatest Frenchman to grace the Premier League.

While he may be a controversial choice, Anelka certainly has won all there is to offer in European Football, and has played for six Premier League side’s along the way. He won two English league titles, one at Arsenal and another at Chelsea, as well as winning three FA Cups. While people may not think of him as a prolific goalscorer, he actually won the 2008/09 Golden Boot, after he bagged 25 goals in 54 appearances for Chelsea.

He also has had time with Liverpool, Man City, Bolton and West Brom, as well as a season at Real Madrid.

While he certainly wasn’t a goalscorer, this French winger lit up the Premier League with his dazzling performances after moving to Newcastle United from PSG in 1995.

In his two seasons with the Magpies, he came very close to winning the title, but his side were overhauled by Alex Ferguson’s all conquering Manchester United. In 1997, he moved to Tottenham where he was once again an important figure, before eventually moving on to Aston Villa and Everton, where he ended his career in 2002.

While he never won a single medal in his entire career, Ginola, his wonderful wavy hair, and his wand of a right foot, see him as one of the best gifts the English have ever received from the French.

Where to start with Patrick Vieira. An absolute beast, and the heartbeat of Arsenal in the late 90’s and early 2000’s. In fact, people still say that the ‘Vieira type player’ is exactly what Arsenal are still missing to this very day.

For those young enough not to remember him, he was a brute of a man, not frightened to put his head, body and feet where it hurts, but was equally as graceful on the ball too.

He won three Premier League titles with the Gunners, including the famous invincibles title win of 2003/04. He eventually left the club in 2005 before returning to the Premier League for a brief spell with Manchester City.

CHECK OUT 10 OF THE BEST QUOTES ABOUT VIEIRA!

Credited with being the player to kick start Manchester United‘s period of Premier League dominance that started in early 90’s following his controversial move from Leeds in 1992. During his five year spell at Manchester United, he scored 93 goals in 205 games, winning an incredible four Premier League titles and two FA Cups before he retired aged just 30.

While there was always an element of controversy about Cantona, there was also an awe about him too. When he was on the pitch, you knew something special could happen.

He was one of the greatest number 7’s in Manchester United history, a fine achievement considering the competition.

Not only was he a master of football, but he was a master of the soundbite. When ‘King Eric’ spoke, people listened.

While he has played for some of the biggest side’s in European football, Henry will always be remembered most fondly for his spells at Arsenal.

He scored an incredible 175 goals in 258 games for the Gunners. It wasn’t just his goals though, he was an absolutely phenomenal player on the ball.

Don’t just take our word for it, check out what some of the greatest people to ever have played the game have also said about Thierry Henry.