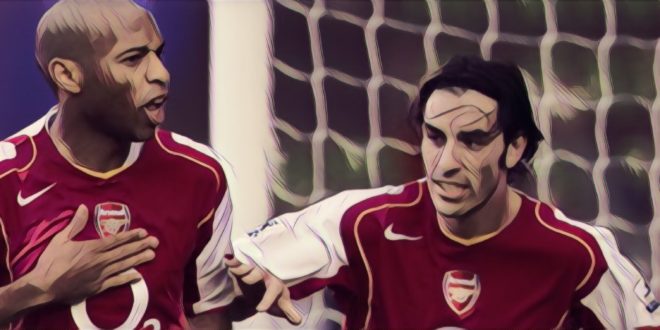 Who were the perfect partnerships that repeatedly teamed up to score goals in the Premier League?

Sometimes you find the right person and things just click. You know you’ve found the one. The same thing, more or less, happens in football, when two players can’t help but find each other on the pitch when it matters most. It’s like a special form of telepathy that can’t be explained. In terms of end product though, no one has clicked better than the guys. A match made in heaven.

The five best assist to goal partnerships in the Premier League era:

Alan Shearer holds the record for most Premier League goals with 260, and no one helped him reach that phenomenal figure more than fan favourite Nobby Solano. Out of the 16 assists the Peruvian laid on for Shearer, this one is perhaps the weirdest:

Few players have ever been easier to provide a final ball for than Thierry Henry, who could seemingly score from anywhere. No one assisted the Frenchman more than his compatriot Robert Pires, who was on hand to provide the pass for Henry’s 100th Premier League goal against Southampton in the 2003-04 season.

The mid-nineties were hardly a golden era for Liverpool, but they were often an entertaining team in that period with the likes of John Barnes, Stan Collymore, Steve McManaman and, of course, Robbie Fowler in their ranks. ‘Macca’ and Fowler were particularly fluid when playing together, as evidenced by the first few minutes of the Reds’ 1996 home clash with Aston Villa, when they took the best defence in the league to the cleaners.

Is Darren Anderton one of the most underrated players of the Premier League era? Marked out early on as a player with huge potential, the winger would end up providing 37 goals and 68 assists in the top flight for both Spurs and Birmingham City. In Sheringham he found his footballing soulmate, the man who was on the end of 29% of Anderton’s first tier assists.

Far and away the greatest combo of the Premier League, and probably even the entirety of English football, very few defences ever had an answer for the duo. Together they turned Chelsea from pretenders into one of the best sides in Europe, winning three league titles and a Champions League during their spell in south west London.

On #Valentines Day, an ode to two perfect partnerships ?

The most prolific #PL pair were @ChelseaFC's Frank Lampard & @didierdrogba, who combined for 36 goals pic.twitter.com/53CgCh3BDP