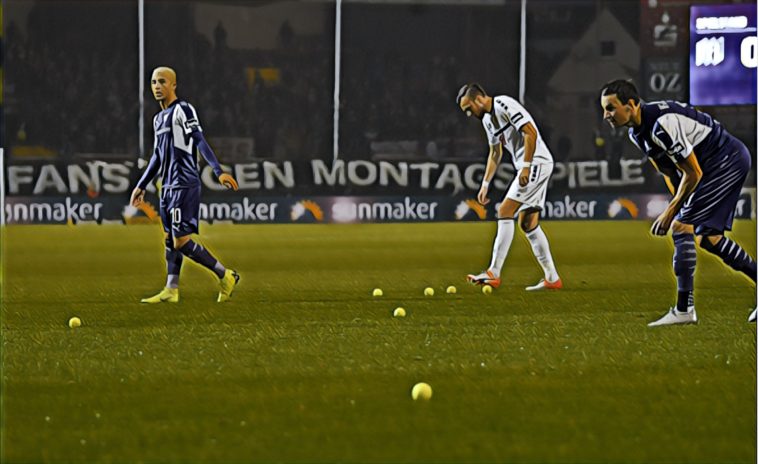 The method of protesting with tennis balls has become more and more commonplace among disgruntled football fans.

Ireland fans inundated the Lansdowne Road pitch with tennis balls tonight during the national team’s Euro 2020 fixture against Georgia. But why?

Irish football fans have long been frustrated with the CEO of the Football Association of Ireland, a man by the name of John Delaney, who has been a source of controversy these past couple of weeks. Supporters lobbed tennis balls onto the field in protest at the football chief’s dreadful management of the game in Ireland, despite senior team manager Mick McCarthy urging fans beforehand to get behind the side and to protest away from the game itself.

While it might seem a bit of a daft idea, the tennis ball form of protest is ideal for a number of reasons and has been utilised by many groups in recent years: it is a non-violent method of voicing dissent, the balls themselves are unlikely to injure anyone caught in the crossfire, they’re easy to sneak into a ground, the process in clearing them can be slow, and it pretty much guarantees that the commentators have to explain the reasons behind the protest to a national audience.

On this occasion though the commentators seemed almost oblivious to the reasons behind the protest, with George Hamilton and former Liverpool ace Ronnie Whelan calling it an “unwanted distraction”, while on punditry ex-Chelsea and Ireland winger Damien Duff called it “utter nonsense”. His colleague Richie Sadlier, however, said that “fans are angry and disillusioned for very legitimate reasons,” defending their right to protest during the game.

The RTÈ commentators acting like they don't know what the fans are protesting is utterly, utterly pathetic. #IRLGEO

Is Ronnie Whelan benefiting from Delaney's €3k a month rent, or why does he hate tennis balls so much? #IRLGEO

In any case it didn’t affect the team, as Conor Hourihane scored the opening goal from a free-kick directly afterwards.

Moments after the Irish fans throw tennis balls onto the field in protest, the @AVFCOfficial midfielder fires them in-front with a peach of a free-kick! 🍑 pic.twitter.com/aBBGXqILNX

And they said the tennis-ball protest would achieve nothing.

Whether or not the protest actually achieves anything remains to be seen, but we thought we should dig up some past examples of such protests to see if they achieved their goals.

Long-suffering Trotters supporters protested against the club’s owner, Ken Anderson, during Bolton’s 3-0 loss to West Brom, having already held a demonstration outside the ground earlier that day. The Championship strugglers have been in financial turmoil for years, but the situation seems to have deteriorated in recent months.

Wanderers were due to be served two new winding-up petitions in January, staff were not paid for the month of February, while the training ground was closed earlier this month due to a shortage of food and drink.

Upset at the growing influence of eSports in football, fans from two of Switzerland’s most popular teams threw tennis balls (and even a Playstation controller) onto the field in a coordinated effort, delaying the game for two minutes. They also revealed a giant pause button banner, as well as one that read “scheiss esport”.

Basel supporters are not shy about protesting causes close to their heart, organising demonstrations for European games against Manchester City, Schalke and Videoton (above) in recent years.

Protest group Hull City Action held a demonstration against owners Assem and Ehab Allam outside the stadium ahead of the club’s game against Sheffield United last season.

Many fans were angry at the way the owners have been running the club, and chose to illustrate that anger during a live televised game. The Allam family still run the club.

In a protest against Monday night games, a purely televisual invention, fans of various Bundesliga clubs demonstrated during games last year. In Dortmund, Borussia supporters boycotted one fixture, leaving the massive Südtribune eerily empty, while at Mainz the goalmouth was littered with toilet paper.

And now the second half of Mainz vs Freiburg has been delayed because fans kept throwing toilet rolls into the goalmouth area to protest at games taking place on a Monday night. First VAR after HT, now this… #BUNDESLIGAxESPN pic.twitter.com/8o1r8M0fL8

It was a game between Eintracht Frankfurt and RB Leipzig that saw the field flooded with tennis balls though. The protests were successful, with the Bundesliga choosing to discontinue Monday night fixtures last November.

Dortmund fans interrupted their team’s German Cup quarter-final against Stuttgart by lobbing tennis balls onto the pitch in protest against ticket prices. BVB supporters have always been vocal in their opposition to the rising costs of following top-level football and they don’t play around when it comes to showing their displeasure.

Blackpool have fallen a long way since the heady days of the Premier League in 2011, dropping to the fourth tier of the Football League within five years. They’re now back in League One, but the club are still trying to overcome years of financial mismanagement under the ownership of the Oyston family. Just last month Owen Oyston and his daughter Natalie Christopher were removed from the board, which is a positive move at least.

Back in 2014 fans protested their dreadful owners by throwing not just tennis balls onto the pitch, but tangerines too. Get it? Because they’re called the Tangerines. Clever.

Angered at the delayed kick-off of their game against Levante due to the El Clasico derby between Barcelona and Real Madrid taking place at the same time, Sevilla fans whipped out the tennis balls in disgust at being made to play second fiddle. LaLiga still don’t care about the smaller teams sadly.