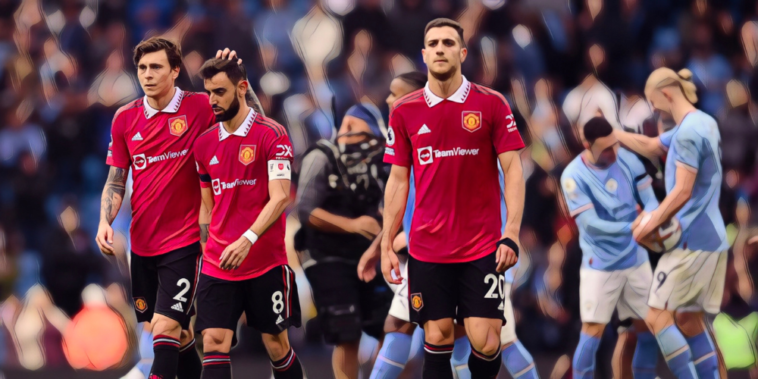 Erik ten Hag has encouraged Manchester United’s players to ‘rip into each other’ following the club’s Manchester Derby humiliation.

United were thrashed 6-3 at Manchester City in an embarrassing performance at the Etihad, with the home side four goals up at half-time as Ten Hag’s team collapsed under pressure.

Erling Haaland and Phil Foden each scored hat-tricks for the Premier League champions, who emphasised the gulf in class between themselves and their cross-town neighbours.

Two late goals added a semblance of respect to the scoreline, but this was a humbling result for Ten Hag and his team following a four-game winning run in the Premier League.

It is the second time in just seven games this season that United have conceded four goals in the first half of a fixture and the Telegraph are reporting that the Dutchman has called for an inquest. Ten Hag is understood to have encouraged his players and staff to ‘rip into each other’ in an ‘open door’ as he looks for a honest assessment of his side’s performance.

“As a team and as individuals, we will criticise each other [on Monday] and then we will learn the lessons and we have to do better, starting the next game.

“I think it’s good that a team like City gives you the status where you are in this moment,” the Dutchman added.

“It’s clear we did well against top teams like Liverpool and Arsenal, when we were disciplined and we followed the rules and principles, we had belief to play and we were on the front foot defending.