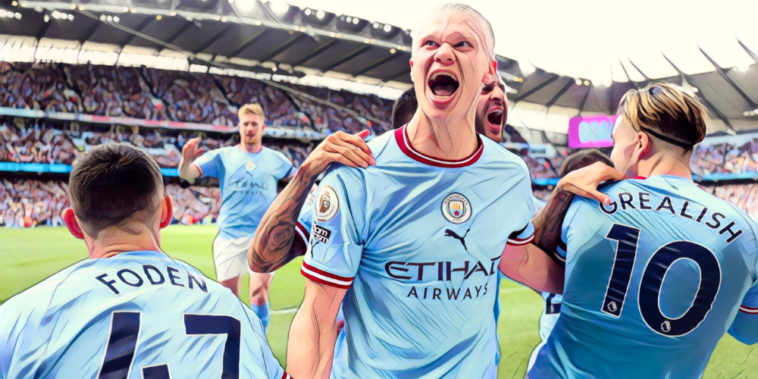 They departed having been taught an almighty lesson, as Manchester City ran riot in what was as destructive a derby performance as any in recent memory. Last season City outclassed United in both fixtures, starving their neighbours of possession and striking when required. This version of City – supercharged following the signing of Erling Haaland – was relentless, ruthless, and led 4-0 at the interval.

Haaland, a frightening phenomenon who has made the Premier League look incomprehensibly easy, hit a hat-trick, his third consecutive treble in home fixtures and 12th, 13th and 14th league goals in just eight games.

Phil Foden also struck three, his first goals in the Manchester Derby. The Stockport-born schemer will have grown up dreaming of days like this, but this perhaps exceeded even his imagination as his first Premier League hat-trick came against the blues’ greatest rivals from across the city.

City’s late changes upset the rhythm and allowed United to put a semblance of respect on the 6-3 scoreline, though this was an emphatic result as Pep Guardiola’s team demonstrated their derby dominance.

Can it be anyone else but Erling Haaland?

Phil Foden and Leandro Trossard each scored hat-tricks of their own and deserve praise, but Haaland’s frightening ability to blow teams away gets more remarkable with each performance.

It’s now 14 goals in just EIGHT league games for Haaland. He has three hat-tricks, as many as Didier Drogba and Cristiano Ronaldo in the Premier League, by the first weekend of October.

The Norwegian also added two assists to his latest treble and at present resembles an unstoppable force. It is hard to fathom where he might end up if his current form continues over an entire campaign.

Eddie Howe has brought the best from several under-performing players at Newcastle and is beginning to get a tune from Miguel Almiron this season.

Almiron has struggled for a consistent end product in the Premier League but took his haul to three goals for the campaign – tripling his total from last season – with a brace at Fulham.

His first was a stunning strike as Almiron – described as magical post-match by Howe – exchanged a one-two with Bruno Guimaraes before volleying home the midfielder’s lifted pass from an acute angle.

First-half humiliations have become an all too common occurrence for the Red Devils, who conceded four first-half goals in the Manchester Derby.

It is the fourth time that United have conceded 4+ goals in the first 45 minutes of a Premier League fixture since the start of the 2020/21, twice as many as any other side. It’s happened two times already this season, in just seven games.

Roy Keane was far from pleased with Cristiano Ronaldo’s omission from the Manchester Derby, with the forward an unused substitute as Manchester United crashed to an embarrassing defeat at the Etihad.

“I think Manchester United are just showing disrespect to Ronaldo. I think he should’ve been let go before the transfer window [closed].

“I think the manager holding onto him, okay, you say you need options, but if you don’t hold onto Ronaldo to sit on the bench. He’s one of the greatest players ever, he had options, this idea that he had no options is rubbish. He did have options, four or five very good options.

“Okay, today, the manager brought Martial on, who scored two, so yeah that’s justified. But generally speaking, the bigger picture, he’s not going to play Ronaldo, we know that. He’s played in one or two European games, it’s just going to get uglier as the season goes on.”

Erik ten Hag later defended his decision and deemed it a mark of respect for Ronaldo given how events unfolded. How the relationship between the two evolves over the course of the season is set to be a fascinating watch.

Why Cristiano Ronaldo stayed on the bench 🧐 pic.twitter.com/lE8BwBfKSt

Trent Alexander-Arnold will have been well aware that the spotlight would be on his showing this week, following the noise surrounding his England exclusion.

Jurgen Klopp came out with a passionate defence of the right-back on Friday, in which he pointed that Alexander-Arnold’s pros far outweigh the cons for his side and that the 23-year-old is still a footballer learning his game.

However, the critics will be out in force once again following a disappointing defensive performance as Liverpool shipped three goals to draw with Brighton at Anfield.

Alexander-Arnold was guilty of a poor headed clearance in the build-up for Leandro Trossard’s opener and was beaten far too easily – despite an unfortunate slip – as the winger skipped past him inside the area. He then allowed Danny Welbeck to steal possession for Brighton’s second and the questions will be louder following another unconvincing performance.

He was not alone in struggling, with Liverpool far below their usual standard so far this season.