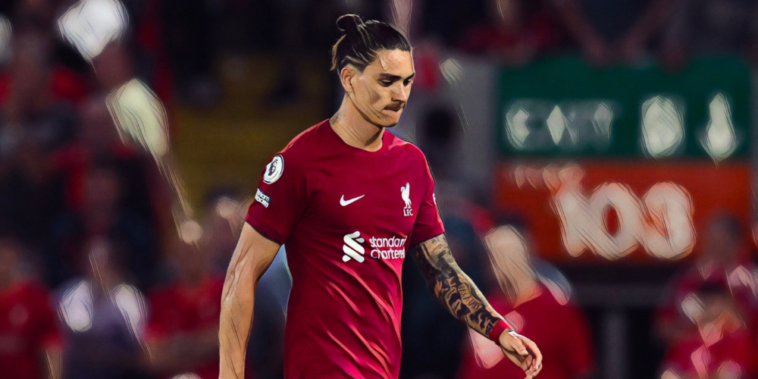 Jurgen Klopp has insisted that he is unconcerned by Darwin Nunez’s relatively slow start to life in the Premier League.

Nunez became Liverpool’s club record signing after moving to Anfield in a deal that could reach €100 million in the summer following a goal-laden campaign at Benfica.

The Uruguayan found the net on his debut for the club in the Community Shield win over Man City, before coming off the bench to bag a goal and an assist as Liverpool were held to a 2-2 draw at Fulham on the opening weekend of the Premier League season.

However, a stupid red card in his next outing saw him suspended for three league games, with the 23-year-old having since struggled to command a regular place in the side.

He could be afforded a chance to impress as Liverpool host Rangers in the Champions League on Tuesday evening, and speaking at his pre-match press conference, Jurgen Klopp was asked about the striker’s adaptation.

“It’s good,” he said. “Of course he is still adapting, how players always adapt. New players come in and everybody talks about them and wants them to shine immediately. That happens from time to time, and sometimes not.

“Only yesterday we had a long talk with Pep Lijnders – because my Spanish or Portuguese is still not better – and we just told him we are completely calm. It’s really important in our situation when he is now not starting, and he is not looking like he is worrying or whatever.

“Why he didn’t start this game [against Brighton], he came from international [duty] and he had DOMS (delayed onset muscle soreness) in the hamstring. When you get this information from the medical department, it gives you some kind of minutes, how long he is allowed to play. Don’t start anybody who is allowed to play 20 minutes or 15. I know it’s again this kind of discussion we open up a little bit for the outside world.

“Of course the three-game suspension didn’t help him to settle, that’s clear. But that’s pretty much all.

“The team is not flying, that makes it not easier for a striker, especially not for a finisher. We create chances but it’s not that everything is clicking and we just put [a ball] in for one player and he finishes our situations off. That’s not our situation in the moment, as much as I wish it would be, and that’s all.“