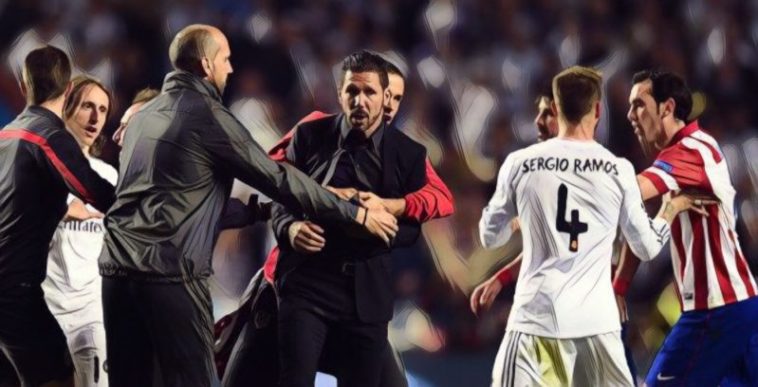 Since arriving at Atletico Madrid in 2011, Diego Simeone has made Atleti almost unbeatable.

In eight years in the competition, only sides featuring Cristiano Ronaldo have beaten them in a knockout game in Europe’s premier tournament.

Even with Ronaldo, no side has ever won a knockout game at the Vicente Calderón, or more recently the Wanda Metropolitano, while Simeone has been at the helm.

In 2011, ‘El Cholo’ took over an Atletico Madrid side in dismay, who had just recorded their fourth loss on the bounce to third-tier side Albacete. He soon transformed them into a team resembling him as a player: A stubborn, tenacious engine.

Most recently Los Rojiblancos outworked the European champions, Liverpool, ending their 42-game unbeaten record at Anfield by winning 3-2 on the night, and 4-2 on aggregate.

As Atletico and Simeone have made a name for themselves as the team that loves the big European stage and consistently beat the best teams in Europe, why have they never been crowned as the best team in Europe themselves?

When the Argentinian arrived at Atletico, he steadied the ship and made them defensively unwavering from the beginning, keeping a clean sheet in his first 6 games in charge. They climbed five places in La Liga and won the Europa League.

Atletico was not tipped to be a challenger for the major trophies in 2013/14, as they had sold their talisman Falcao to Monaco. Simeone used the 60 million euro to add the final parts his team needed to compete with the best Europe had to offer.

18-year-old José Giménez and Toby Alderweireld were added to bulk the defensive options of the squad, and David Villa was signed from Barcelona for just over five million euros.

The team played the same way the current Atletico batch does, in a structured 4-4-2. The team kept its shape phenomenally, using two banks of four to sit in front of the opposition, pushing higher against weaker opponents, and sitting in deep against the likes of Barcelona and their Madrid rivals.

The back four of Juanfran and Filipe Luis surrounding Diego Godín and Miranda was nearly impenetrable, while the up and coming Thibaut Courtois dealt with nearly anything that got past them. Gabi and Tiago guarded the back four.

This team should not be mistaken for a solely defensive-minded team. The structure and organisation of the defending was merely a base for the intricate genius of Arda Turan and Koke to supply for the quick, energetic David Villa, and strong, prolific, focal point of the team Diego Costa.

These four produced brilliance throughout the season, resulting in multiple 4-0 and 5-0 wins for the Madrid outfit, as well as a 7-0 against Getafe. In Europe, they topped their group with 16 points, before thrashing Milan 5-1 on aggregate in the first knockout round.

Atleti then frustrated Barcelona, condemning them to their first exit from the Champions League before the semi-final in seven years, before drawing 1-1 at the home of the Catalan giants on the final day of La Liga’s season, to win the title at the Nou Camp. They received a standing ovation from the home support. They had well and truly overcome Barça.

After easing past Mourinho’s Chelsea in the semi-finals, all that stood in the way of Atletico’s impossible season becoming reality was their arch-rivals, Real Madrid.

In the first half, Diego Godín stepped up with another potential trophy-winning header to put the red, white, and blue half of Madrid on the verge of their first Champions League. The physically exhausted side needed to hold on for mere seconds of stoppage time, before another defender who loves a big game goal, Sergio Ramos, stepped up to drag the game to extra time.

As the legs of Simeone’s men went from underneath them, Madrid scored three times in stoppage time to claim a comfortable 4-1 scoreline from a game that was anything but.

This loss seemed to scar Atletico.

Atletico responded in a way the club had never been able to do before, by investing heavily in Antoine Griezmann, Mario Mandžukić, and Jan Oblak to name a few. The club spent more than they earned in the window, resulting in a squad richer in depth.

Many of the new signings took some time to adapt to Simeone’s challenging system, and the team’s performance dropped, resulting in a third-place finish in La Liga, 16 points off Barcelona in first. Real Madrid once again got the better of their rivals in the Champions League, scoring another late winner at the Bernabeu to win 1-0 on aggregate in the quarter-finals.

Atleti were once again busy in the transfer market, selling key players such as Mario Mandžukić, Arda Turan, and Miranda. The club once again invested heavily, determined to compete with the two giant clubs in Spain, spending over 100 million euros for the second summer in a row on players like Stefan Savić, Yannick Carrasco, and the re-signing of Filipe Luis.

After this reshuffle, with Antoine Griezmann starting to show his true quality, Simeone’s men looked set to compete on all fronts again. The team was near impossible to score against once again, conceding just 18 goals in La Liga, finishing three points behind champions Barcelona.

Los Rojibancos topped their Champions League group, before progressing on penalties in a drab 0-0 affair with PSV in the next round. In a similar fashion to 2014, Simeone conducted another special European tie against Barcelona, to progress to the semi-finals, beating the European champions 3-2 on aggregate.

The Madrid outfit then faced Guardiola’s Bayern Munich, in search of a Champions League medal before the Spaniard would depart for Manchester. In a tight 180 minutes, Simeone’s men brilliantly shut out the Bavarian giants to progress to the final in Milan, where they had the opportunity to avenge their 2014 final loss, and 2015 quarter-final loss, against Real Madrid.

After outperforming Los Blancos over 120 minutes, a miss from the spot by Antoine Griezmann in normal time would send the game to penalties after a 1-1 draw. Incredibly, Atelti watched Cristiano Ronaldo once again kill their dreams in a Champions League final and celebrate to the crowd with no shirt.

The sorrowful narrative of Atleti being able to beat everyone but Real Madrid and Cristiano Ronaldo has continued since these finals. Zidane’s side knocked out Simeone’s men in the semi-finals on their way to ‘La Duodécima’ in 2017, and Ronaldo scored a hat trick to overturn Atletico’s 2-0 first-leg lead for Juventus in 2019.

Even after recently progressing past the team to beat in Europe once again in March, it seems Simeone is forever cursed to miss out on Europe’s most coveted prize by Ronaldo and Real Madrid.