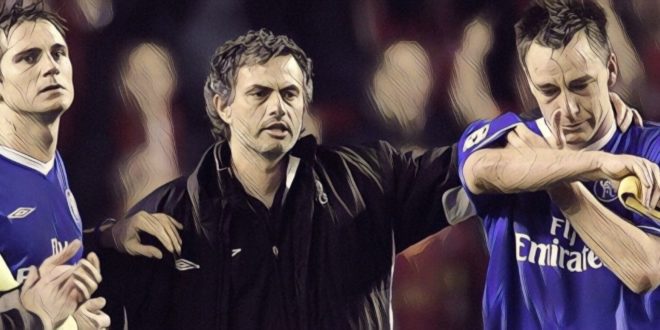 Teams that should have won the Champions League: Mourinho’s first Chelsea side

When asked about his toughest opponent, Ronaldinho replied: “In Europe, it had to be Chelsea”.

The football icon described their encounters as “always fierce”. ‘Dinho’s great Barça side struggled to compete with Mourinho’s giants, like every other side in Europe.

Everyone seemed to recognise Jose’s Chelsea as the team to beat in Europe. So why were they always beaten before they could prove it?

In 2004, Roman Abramovich wanted to take his rising club from the decent cup side that they were to a club that could dominate England and Europe.

To do this, he brought in a man willing to win at all costs: Jose Mourinho.

As the Portuguese reminded the media that he was a European champion and announced himself as the “special one”, he very quickly brought enough quality players to a top team to make them ‘special’.

By using Abramovich’s financial backing, Mourinho would introduce Ricardo Carvalho to John Terry and Petr Cech, as the Blues built the “steel triangle” that their upcoming success would be founded on. Paulo Ferreira and William Gallas covered the flanks.

Claude Makelele would protect this trio in the holding midfield role, the former Real Madrid man an exemplary defensive midfielder. He played behind Chelsea’s all-time top goalscorer Frank Lampard, and Eidur Gudjohnsen. The powerful spine of the team was spearheaded by the monstrous Didier Drogba.

Technically and athletically able players like Damien Duff and Arjen Robben would complement the brute force of the team, often providing the necessary inspiration to break teams down and the required pace needed for Chelsea’s blistering counter-attacks.

Chelsea’s new side announced themselves to the Premier League in a similarly spectacular fashion to Jose’s press conference announcement, beating Ferguson’s Man United 1-0 at Stamford Bridge.

Mourinho later described this as the first showing of Chelsea’s ‘all-in approach’, where he felt United would never have scored, even if the game had lasted for 900 minutes.

Their supreme strengths, willingness to fight for their manager, and their successful implementation of ‘tactical periodisation’, meant this team could show they were ‘special’ from the very beginning. And how they did.

Not many teams would score at all against the West London outfit in the 2004/05 season. The 15 goals they conceded in 38 games is still a Premier League record.

After racing ahead of their competition early on, the Blues never looked back and walked to the Premier League title with a record points tally (until 2018) of 95.

They showed no signs of relenting in Europe. After topping their group, they progressed past Ronaldinho’s fabulous Barcelona side 5-4 on aggregate – despite a famous strike from the Brazilian show below – before another thrilling tie with Bayern Munich saw them progress to the semi-finals as 6-5 aggregate winners.

😮 A classic round of 16 comeback victory…

After dislodging the best competition Europe had to offer, the champions of England were the favourites to lift their first-ever European cup. Milan appeared to be their only threat, in a final four that also included Liverpool and PSV.

This belief was wrong, as Rafa Benitez kicked off a tense rivalry between the two clubs in Europe, as his side beat Mourinho’s at their own game. They played in a pragmatic, cautious manner, and frustrated the life out of the team who finished 37 points ahead of them in England.

The soon to be European champions managed an actionless 0-0 draw at Stamford Bridge, before gaining an early lead at Anfield through the infamous ‘ghost goal’, which was enough after keeping the Londoners quiet for 180 minutes.

Despite having the best side in Europe, this tie highlighted something that was missing from their ranks. An intricate number 10. Someone who could come on and break down a low block which they so often implemented themselves.

Mourinho didn’t see it that way and instead opted for more power and pace. Athleticism was added in midfield and attack, through Michael Essien, Lassana Diarra and Shaun Wright-Phillips, as well as Hernan Crespo’s return from loan.

Despite this potential chink in their armour, the champions continued to bully the Premier League, once again racing ahead from the start and never looking back. They won 20 of their first 22 games in the Premier League.

Despite once again being unstoppable in England, and their recent 4-1 drubbing of Liverpool at Anfield, Mourinho still could not beat the Reds in Europe. They faced the Benitez’s men in the group stage of the Champions League. The tense nature of their contests continued with two more 0-0 draws, seeing both teams progress.

Mourinho would then see his side knocked out by eventual winners Barcelona, losing 3-2 on aggregate in a tie heavily influenced by Asier Del Horno’s first-half red card in the first leg, at Stamford Bridge.

An FA Cup semi-final defeat to their recently turned bitter rivals Liverpool left a desire to overcome their rivals in these key moments, and deliver the trophy this squad’s quality warranted, despite another phenomenal claiming of the Premier League title.

Abramovich invested in the squad again, swapping William Gallas for Ashley Cole from Arsenal, Michael Ballack from Bayern Munich, and the British record signing of Andriy Schevchenko from Milan. Despite no attacking playmakers being signed, Chelsea once again looked stronger and ready to compete domestically and in Europe.

In Mourinho’s first case of ‘third season syndrome’, the team’s performances began to decline. After losing their first away game of the season to Middlesbrough, the Blues recovered to remain in contention for the league.

Five draws in five weeks during the winter period gave a rising Manchester United team a chance to reclaim the title for the first time in four seasons.

A January loss at Anfield further dented their title challenge, before the frustrating theme of their season would see them miss out on regaining their league crown, after drawing their final five fixtures, drawing 11 in total.

These frustrations were not felt in cup competitions, as Mourinho had led his side to a League cup, FA cup, and Champions League semi-final, where it just had to be Liverpool who awaited.

After topping their group which included Barcelona, and easing past Porto and Valencia, Chelsea was favoured to progress to face Milan in the final, despite history pointing another direction.

Another tightly contested 1-0 win at Stamford Bridge meant Chelsea were in the driving seat heading into the second leg. Lightning never strikes twice.

When Benitez’s side scored early, they were once again able to shut Mourinho’s men out, and kept their cool to beat them 4-1 on penalties, and set up a second final against Milan in three years.

It was the same old story for Jose. His side was unable to break down a side that could match them in organisation and stubbornness. He could not bully Liverpool.

A rocky start to the following season saw Mourinho resign from his post at Chelsea in September that year, as longstanding disagreements with Roman Abramovich deteriorated past the point of recovery.

His Chelsea side managed by Avram Grant would overcome Liverpool in a Champions League semi-final, in a more open affair that finished 4-3 on aggregate.

They would then finish as runners up in the Premier League, League cup, and Champions League. Something impossible to imagine happening under Jose, who was yet to lose a final in 90 minutes in his career at that stage.

Gus Hiddink would take over from Avram Grant following their season of second places, only to lose to Barcelona in an extremely dubious Champions League semi-final, and finish third in the Premier League.

After coming so close to their first European crown despite performing at a lower level after Mourinho left, it remains baffling that they did not reach the pinnacle of European football during his time.

By losing to their Liverpool curse with Mourinho, they also lost their ‘all-in approach’.