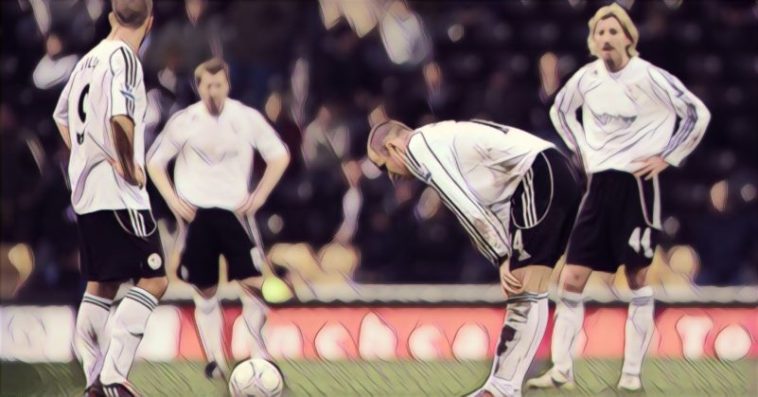 The teams who disgraced the Premier League with their presence by playing atrocious football and barely being able to scratch a few wins together.

The so-called Best League In The World™ has had some pretty terrible teams in it over the years, but usually there’s just one big stinker in the bunch per season.

Sheffield United were last season’s worst side, failing to build on an impressive return to the Premier League in one of the division’s worst ever cases of ‘Second Season Syndrome’.

The Blades’ poor performances contributed to their relegation in pretty embarrassing fashion, and their struggles have seen the club enter this list of the Premier League’s worst sides.

The Premier League clubs with the lowest points totals ever:

Sheffield United’s season of struggle has seen the Blades condemned to the Championship, just a year after punching above their weight to secure a ninth-placed finish upon their Premier League return.

Last season’s overachievement was followed by a miserable campaign at Bramall Lane, one that saw Sheffield United compile the worst-ever start to a Premier League season, failing to win in their opening 17 fixtures of the 2020/21 campaign.

The methods that worked so well last season failed to achieve similar results this time around, with only six sides having ever finished a Premier League season with less than the Blades’ paltry haul of 23 points.

Chris Wilder departed in March, but there was no stopping the rot as defeat to Wolves relegated the Blades with six games of the season remaining, an unwanted joint-record they now share with Ipswich Town (1994/95), Derby County (2007/08) and Huddersfield Town (2018/19) for the Premier League’s earliest relegation.

It started out so well for Norwich City in 2019/20; two wins from their opening five games saw them get off to a better start than their fellow promotion clubs, who both stayed up, powered by a goal glut from Teemu Pukki which saw them score nine goals – so where did it go wrong?

Despite an impressive 3-2 win over Manchester City in September, the Canaries were just never able to stem the flow of goals going the other way. They invested nothing in their defence last summer, while their midfield were useless at stopping attacks at the source.

On top of that, the tactical approach of Daniel Farke only made things worse. Norwich chose to play attacking football despite their defensive weaknesses, which is fine if you score the requisite amount of goals to counteract the ones you concede. But they didn’t get even close, scoring 26 goals in 38 games.

They played some attractive football at times, but it was of no use to their chances of survival. In fact, it actively harmed them. They do, though, have some talented young players, such as Emi Buendia, Todd Cantwell and Max Aarons, who have since helped the Canaries bounce back at the first attempt.

Norwich were probably the best 20th-placed of the Premier League era, which might be the worst consolation prize ever.

The five most relegated clubs of the Premier League era

Portsmouth ended the 2009/10 season with just 19 points, though their low total came as a result of being docked nine points for entering financial administration.

Even without the points penalty, Avram Grant’s side would have still finished bottom of the Premier League after mustering just seven wins for the campaign.

Portsmouth fared rather better in the FA Cup despite their relegation, reaching the final – their second showpiece in just three seasons – before losing to Chelsea at Wembley.

The best thing about this season is that it’s not even the worst one Sunderland has suffered. Peter Reid was sacked by October, and the recruitment committee, headed solely by Howard Wilkinson, to find a new manager decided on… Howard Wilkinson.

The ex-Leeds boss was gone by March, after winning just two league games, to be replaced by Mick McCarthy, who oversaw the club’s relegation back to the second tier. A brilliant 2-1 win over Liverpool in December was the highlight of the season, but they failed to win another game for the rest of the campaign, setting a Premier League record with 15 consecutive defeats.

The Tim Sherwood experience lasted until late October, at which point he had won precisely one league game. Remi Garde took over in November and, to his eternal credit, doubled that record. To be fair to the Frenchman, there was no saving a club that had been rotting from the inside for years thanks to dreadful financial mismanagement over an extended period.

Highlight of the season has to be Joleon Lescott tweeting a picture of a fancy car after Villa were thrashed 6-0 by Liverpool in February. He tried to explain it away by saying he “accidentally” sent it while driving. Sure.

A year of darkness: The pain of losing three Aston Villa legends in 12 months

Following two magical seasons in which the Terriers gained a miraculous promotion, followed by an even more miraculous survival in the top flight, it finally all came apart last season.

Huddersfield didn’t taste victory until November, when they defeated fellow relegation battlers Fulham 1-0 in a god awful contest, and by January David Wagner had left the club he had steered to unimaginable heights.

They managed to avoid the ignominy of being the first top flight team to not score ten or more away goals in a campaign after they secured a shock 1-1 draw with Manchester United at Old Trafford.

High point of the season had to be when a Sky Sports reporter made his way through the crowd to greet the club’s new coach, Jan Siewert. Only it wasn’t him at all. It was “Martin from Wakefield”. Awkward.

The Black Cats extended their record-breaking losing streak to 20 games at the start of the season, setting the tone for the rest of the campaign. By Christmas they had attained one win and a mere seven points. At the time they set a new low for points gained and would only secure their third win of the season against Fulham long after they were relegated from the division.

On the bright side, their relegation led to Roy Keane taking over the following season, leading them back to the Premier League by winning the EFL Championship. His appointment gave much-needed stability to the club, until Ellis Short took over the organisation and ruined it all.

If you google “worst premier league teams ever’, the Wikipedia page for Derby County’s 2008-09 season comes up on the front page of results. That’s how definitive their badness was that season.

The Rams broke a host of records that season, each one more unwanted than the last: the longest run of games (32) without a win; lowest points total (11) since the introduction of 3 points for a win; the record for the fewest wins (1) in a Premier League season; they are also the only team to have been relegated from the EPL in March, and just the second in the post-war era.

That solitary win came in September against Newcastle United, with whom they also drew later in the season, meaning 36% of their points from that campaign were won against the Magpies.

Read: How Borussia Dortmund recovered from the brink of financial disaster

See Also: Golazo merchant Anderton and his wand of a right peg