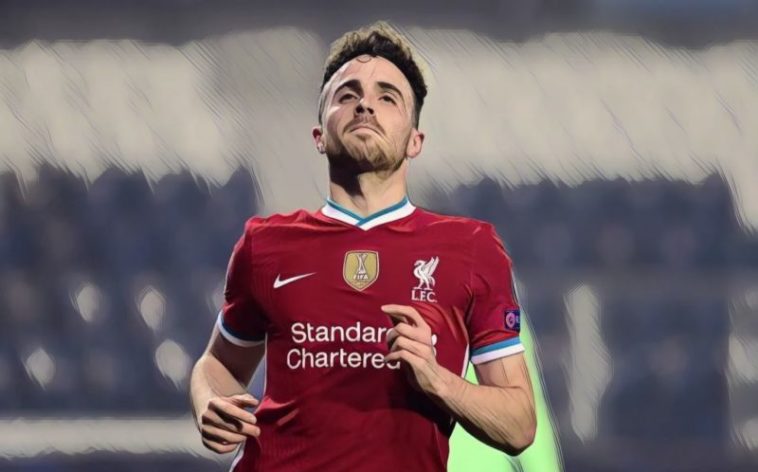 Virtually every great team is defined by a subset of its players, a cluster of the overall unit whose success is particularly eye-catching.

Busquets, Xavi, and Iniesta. Tevez, Rooney, and Ronaldo. Messi, Neymar, and Suarez. Such holy trinities develop a sort of permanence to a team, a perception that they are as unalterable and vital as the club crest.

Until recently, Liverpool boasted the ultimate holy trinity of the modern game. The combination of Sadio Mane, Roberto Firmino, and Mohammed Salah are — while still mesmerizing and excellent — being challenged by the ascendance of one of the Premier League’s more undervalued talents.

Diogo Jota’s seven goals in his first 11 matches as a Liverpool player has given Jurgen Klopp a genuinely viable alternative for his forward line. How has he muscled his way into that position in such a short space of time?

At Wolves, Jota stood out as being especially lethal in attacking transition. The 23-year-old was sublime at exploiting the space created by Raul Jiménez, who excels at dropping off, drawing defenders, and either turning to pass the ball himself or laying it off to an advancing midfielder who can then supply a penetrative pass. Attacking the channel between opposition fullbacks and center-backs became a particular strength of Jota’s.

He could also drop off and either carry the ball himself or feed Jiménez, but this tended to occur when he found pockets of space in between the lines. He rarely receives the ball with his back to goal and a defender tightly marking him, preferring instead to take up intelligent positions so he can be found by the player with the ball.

Jota has shown himself to be extremely versatile. His ability to receive, pass, and shoot comfortably with both feet means he is equally suited to playing on either flank or up front. It also makes him a more unpredictable ball carrier. While not possessing the power, skill, or pace of then-teammate Adama Traore, Jota is excellent at suddenly changing direction. He often shifts the ball onto one side to lure a defender before immediately bringing it back and exploiting the space left by his opposite marker. Being able to play off both feet enables this maneuver to be consistently effective.

For Wolves, he would often drift as wide as the right touchline, holding the team’s width to allow the right wingback (either Traore or Matt Doherty) to make runs in the half-space. He also regularly dropped off to combine with midfielders and wingbacks with quick interchanges of passing to achieve numerical overloads in different areas of the pitch.

Oftentimes attackers can drop deep to the detriment of their team, disrupting their build-up structure or leaving them short of options higher up the pitch. Jota usually avoids this problem. He possesses an uncanny understanding of where he should be at what time, meaning he can adapt to playing different roles.

Jota’s combination of counter-attacking prowess, attacking versatility, and intelligent movement made him the prime alternative to Salah and Mane. While they dominate possession more than Wolves, Liverpool also create their best attacking opportunities in transition. Their wingers play as inside forwards who can attack the box with forward runs and find space to create or score, ideally suiting Jota’s style of play. The Portuguese can also combine with the fullbacks on either flank in a similar way to how he did at Wolves given that Trent Alexander-Arnold and Andrew Robertson play as high as wingbacks.

Perhaps the major difference between Liverpool and Wolves in their styles of play is the degree to which they press. Wolves are one of the most passive sides in the Premier League, sitting deep and remaining compact in the defensive phase. By contrast, Liverpool are notoriously aggressive with their high press. Fortunately for Klopp, Jota possesses the necessary work rate and tactical acumen to be able to adapt to his new role off the ball. In all other aspects of Liverpool’s approach, Jota fits seamlessly into their attacking methodology.

Liverpool have their breakthrough goal! 🔓

A great team move, with Trent Alexander-Arnold putting it on a plate for Diogo Jota 👌 pic.twitter.com/c2M4pCxEqn

Should Jota continue to be used on the wings or as a substitute, it’s likely that his scoring rate will — if not remain the same — continue to be impressive. With players like Firmino, Robertson, Alexander-Arnold, and Thiago, they have enough players to supply Jota with the sort of service that he can maximize with his movement in the final third and in transition.

He may struggle if used centrally throughout the course of 90 minutes, as he isn’t used to leading a press or dropping off in congested areas like Firmino is. Perhaps he could evolve into that type of player in the future, but for now, he’s best used in conjunction with Firmino rather than instead of him. As the 1-1 draw with Manchester City showed, Klopp can also deviate from his customary 4-3-3 to field all four of his stellar attackers in the same line-up.

Jota has been a phenomenal signing for Liverpool and will continue to be in the coming years. His attributes are perfectly suited to Klopp’s style of play, and he gives the reigning champions invaluable adaptability and flexibility in attack. Liverpool’s front three are no longer untouchable. And for their title prospects, that’s a good thing.

Tactical Retrospective: Brendan Rodgers brilliant but flawed Liverpool side of 2013/14