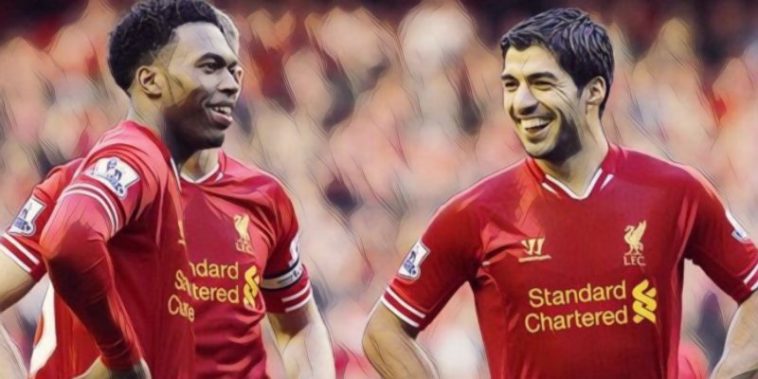 In the 2013/14 season, current Leicester City coach Brendan Rodgers brought Liverpool within three games of their first Premier League title. Their sensational demise during those last three games has sullied their standing among pundits and fans, but they were a genuinely excellent side.

Liverpool scored 101 league goals that campaign, the highest number of goals scored by a Premier League runner-up and the fourth-highest output ever. The team’s attacking productivity was primarily a function of the team’s excellence in attacking transition and the extraordinary individual quality of Luis Suarez, who scored nearly one-third of the team’s league goals with 31.

Rodgers set Liverpool up in a 4-1-2-1-2. Steven Gerrard sat at the base of the midfield diamond, supported by the energy of Jordan Henderson and the creativity of Phillipe Coutinho. Suarez and Daniel Sturridge acted as the team’s strikers, while Raheem Sterling enjoyed his breakthrough campaign playing in the hole.

While this was Liverpool’s primary setup – particularly when defending and during counter-attacks – they were capable of shifting to a 4-3-3, with Sterling and one of the strikers drifting wide. This meant that the formation’s lack of natural width was often compensated for by the movement and positional versatility of the front three.

Gerrard, who played most of his career as a dynamic box-to-box midfielder, was reinvented into a regista, or deep-lying playmaker. Playing just in front of the back four, the Liverpool skipper had more time and space on the ball than he would have had in more advanced positions. As such, he could spread the play from deep and pick out the Liverpool strikers with long, raking passes from the back. Gerrard utilized such passes to initiate Liverpool’s counter-attacks, supplying a season-high 13 assists in the league.

With the box-to-box presence of Henderson covering for Gerrard defensively, Rodgers created a system that maximized the abilities of the Liverpool legend at that stage in his career. Given the dearth of deep-lying playmakers in English football, which Michael Carrick at Manchester United a notable exception, Rodgers’ use of Gerrard in that role typifies his tactical ingenuity and confidence in his principles.

Aside from assisting Gerrard, the diamond setup enabled Liverpool to be a superb outfit in attacking transition. With the presence of two strikers and a number ten, Liverpool could counter-attack with greater economy because they always had at least three players in central areas who could push the defence back, stretch the opposition by moving wide, and provide Liverpool’s midfielders with a myriad of passing options.

Rodgers also used two strikers to allow his team to, at times, play more directly. If their preference of building attacks with patient build-up and intricate passing moves broke-down, they always had the option for a long-ball over the top to Suarez or Sturridge. This more direct-approach is a reflection of Rodger’s pragmatism and willingness to adapt, both of which were crucial for Liverpool’s ability to sustain their attacking productivity during the course of the season.

Despite being at his best as a wide player, Sterling thrived playing in a central role. Sturridge and Suarez were an intelligent front-two who created space behind them with their movement. Sterling, whose ability to find and exploit space has been a hallmark of his game for Manchester City and England, was masterful at making the most of the space created by the strikers ahead of him. And while he did not possess the passing and vision of a traditional number-ten, his superb dribbling created channels for Suarez and Sturridge to run into. While he would often drift wide to operate as a traditional winger, Sterling was able to bring specific qualities as a number ten that maximized the output of the front three.

Despite their attacking excellence, Liverpool were a porous defensive team. They lacked defenders of excellent individual quality, and the use of Gerrard and Coutinho in the same midfield meant that Henderson was sometimes left with too much defensive work and the back four lacked adequate protection.

These same issues would also plague Jurgen Klopp’s early tenure until the acquisitions of Fabinho, Allison, and Virgil Van Djik were made. Without players of that ilk, Rodgers seemed unable to shore up the Reds defensively without curtailing their attacking output.

Nevertheless, Liverpool were an excellent team during the 2013/14 campaign. With a system that facilitated different types of attacking and maximized the abilities of their most talented players, Rodgers created an exhilarating team that came so close to a memorable Premier League triumph.

Why Diogo Jota is thriving at Liverpool – IFC News

[…] Tactical Retrospective: Brendan Rodgers brilliant but flawed Liverpool side of 2013/14 […]