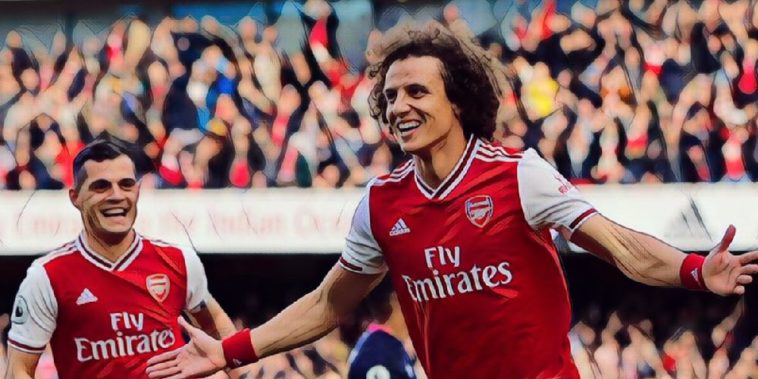 After a mediocre display at Old Trafford last week, Arsenal bounced back by edging Bournemouth 1-0 in a tense affair at the Emirates.

Now third in the Premier League, Arsenal will be hoping to capitalise on the poor form of Tottenham and Manchester United as they look to get ahead in the race for top four.

Unai Emery lined his team up in a 4-2-3-1 formation, with captain Granit Xhaka playing alongside Matteo Guendouzi in central midfield, with Dani Ceballos slightly advanced. Callum Chambers played at right-back, while the 18-year-old Bukayo Saka was once again given the nod at left wing.

Bournemouth meanwhile lined up in a 4-4-2, with a front two of Callum Wilson and Dominic Solanke flanked by Joshua King and Harry Wilson.

Arsenal started the game brightly, with fluid and precise passing accompanied by aggressive pressing allowing to dominate the game in the early phase. They were rewarded after a corner from Nicolas Pepe found David Luiz, who darted past his marker to record his first goal for the Gunners.

Their start was no doubt assisted by a dull first-half showing from Bournemouth. The Cherries were content to pass the ball between themselves with little urgency or penetration, making them susceptible to Arsenal’s high pressing. This made retaining possession difficult, and often led to them being caught out.

Perhaps Eddie Howe’s side could have benefitted from the inclusion of Lewis Cook, who has repeatedly shown an uncanny ability to set the tempo of his team’s play through his composed and confident passing. However, with Cook still recovering from injury, Bournemouth simply required more impetus in their build-up play.

The second half saw just that, with Howe making intelligent tactical shifts that changed the complexion of the match. Harry Wilson and Joshua King pushed further up and inside, providing more support to the previously isolated front two and leaving space out wide for the fullbacks to exploit. Phillip Billing was also given the freedom to drive with the ball and support attacks with late runs, giving Bournemouth an element of unpredictability in attack.

This change in attacking shape combined with quicker passing disrupted Arsenal’s defensive structure, as they were not able to press as effectively, instead were pinned inside their own half. If it weren’t for Bournemouth’s poor finishing and a key defensive plays from Guendouzi and Chambers, the game could quite easily have ended quite differently.

100% – In all competitions, Arsenal only have a better 100%-win ratio in home games against Gainsborough Trinity (8 wins), Reading (6) and Stockport County (6) than against Bournemouth (5). Conquering. #ARSBOU pic.twitter.com/U5C5UiN1Aq

Yet it ended with Arsenal claiming a clean sheet and all three points. Despite their lacklustre showing in the second half, their ability to resist Bournemouth’s pressure is at least partially a reflection of their new-found resilience, characteristics that have rarely, if ever, been associated with the Gunners in recent years.

While Emery can’t be overly pleased by his team’s overall performance, he can be optimistic that his side can develop some momentum from the win. After years of turmoil and disappointment, perhaps Arsenal can begin to find the consistency they need to secure Champions League qualification and return to the Premier League elite.