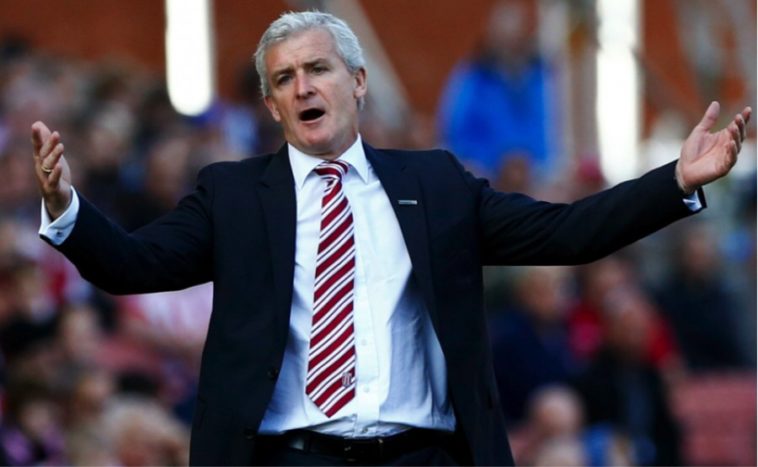 Under Mark Hughes Stoke city’s midfield had come a long way since Tony Pulis’ infamous central midfield ‘cage’. But since the departure of Steven N’Zonzi in the summer of 2015 there’s been a fair amount of turbulence in the midfield department.

In the first two seasons under Hughes, Stoke began a new style of trying to keep possession and unpick opponents. Steven N’Zonzi’s calm ball playing ability was integral to this.

This season however, they have had to rely far too much on the height of Peter Crouch and the direct style of Charlie Adam. With talent such as Affelay and Imbula stuck on the bench whilst Bojan has been shipped out on loan it’s time to unpick Stoke City’s midfield crisis.

Going into the 2016/17 season Stoke didn’t seem short of options in midfield. Defensive options included Geoff Cameron, Glenn Whelan, Joe Allen and even Marc Muniesa. There was also no shortage of attacking threat either, with the dynamic dribbling of recond signing Gianelli Imbula, creativity of Bojan and Afellay and even the plan B of Charlie Adam’s long passing and shooting.

It could be argued that Mark Hughes had too much choice and as a result never really set on his best midfield, as well as starting XI.

Looking at the title winning Leicester team as well as Chelsea’s lineup this season, consistency has been the key. Last season’s injury crisis may be the reason we felt the need for so much cover, but this term it seems to have hindered rather than help.

As a result of these options, Hughes has been unable to settle with any one system. The season got off to a poor start with a familiar 4-2-3-1, so Joe Allen was moved into an advanced role behind he striker with Adam and Whelan behind. The new found solidity helped Stoke find a turning point and climb up the table.

Over the Christmas period Stoke then switched to the in-vogue 3-4-3 that was being used to successfully by Antonio Conte’s Chelsea. Whelan and Adam were the preferred pairing in the middle of this system as Gianelli Imbula didn’t seem to be trusted for his ability to track back and defend.

Hughes alternated between these two systems before a disciplined 0-0 draw at the Etihad helped find a system Leicester had deployed so well last season, the classic 4-4-2. But problems came under the new system as the team struggled to hold onto the ball and the defence didn’t prove solid enough to maintain this counter attacking system.

One of the most notable midfield shortcomings this season was that of attacking midfielder Bojan.

Initially part of the Hughes revolution in our midfield, Bojan struggled early on and wasn’t having his usual effect on games. This culminated in frustration for the Spaniard as he began taking pot shots from range. A missed penalty against Bournemouth seemed to heavily knock his confidence.

After being pushed out to the wing Bojan’s performances dropped even further and he was sent on loan to Mainz to get more game time.

Gianelli Imbula has also failed to seriously impress since his £18.3 million record fee in January 2016.

Odd flashes of brilliance have been marred by defensive ineptitudes that culminated in several 4-0 battering’s at the beginning of this season. A mini resurgence in December came to an abrupt end and many fans now suspect a player/manager fallout.

Ibrahim Afellay didn’t come into the team until December but has barely been included since his return.

Reliance on the ‘old guard’

The team has mainly relied on the old guard of Glenn Whelan, Charlie Adam and to an extent Geoff Cameron.

Whelan doesn’t appear to have done much of note other than is usual defensive tidying up and good distribution of the ball. Adam has been relied on for is delivery to the likes of Crouch but his tackling leaves a lot to be desired. More recently Geoff Cameron’s defensive displays have been very impressive, his dribbling also has been exciting but his passing seems to be very lacking at times.

The one real positive of Stoke City’s midfield this season has been new signing Joe Allen. His relentless running and surprising goal scoring form has really helped the team. But even he has had an end of season slump, most likely due to fatigue, after playing almost every game since the start of the season.

So moving forward to next season, what should Stoke City and Mark Hughes do to solve this crisis?

Firstly a decision needs to be made as to what formation and style the team play next season. If possession and stability are what the team is after then a 4-3-3 would be the logical solution.

Next of all Gianelli Imbula’s future must be decided.

The one real certainty is that Charlie Adam needs to be replaced, potentially by a younger alternative. A perfect match could be Derby’s young Englishman Will Hughes who is looking like playing championship football again if he remains at Derby.

If you have any suggestions on how Stoke can improve, leave us a comment below.

If you are interested in becoming a writer about Stoke City, please join our writing team.