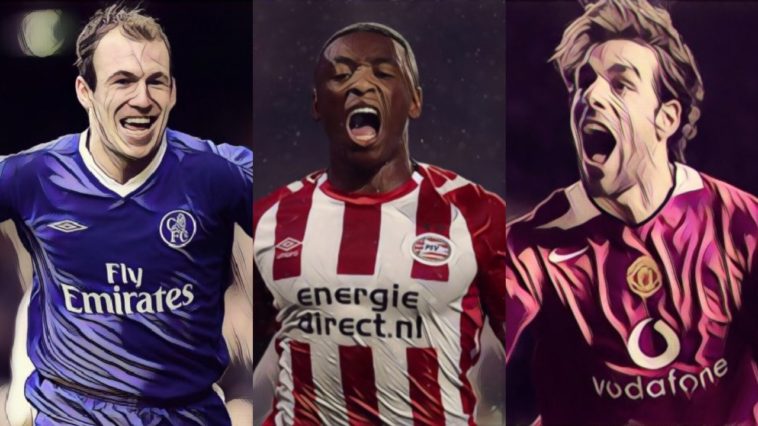 PSV Eindhoven have provided some of the finest players to have graced the Premier League over the years.

Steven Bergwijn is the latest Rood-witten product to get a move to the Premier League, moving to Tottenham Hotspur for a deal reported to be worth around £27 million.

The 22-year-old, who has contributed five goals and ten assists in the Eredivisie this season, plays out wide, but he has also operated as a number ten. Spurs fans, who are keen to see how quickly he adapts to the top tier of English football, are no doubt delighted with the signing after he scored on debut in their massive win over Manchester City on Sunday.

Can Bergwijn make as big an impact as some of his predecessors?

Rating the impact of the most high profile PSV imports to the Premier League:

Arguably the most high profile transfer to the Premier League from PSV, Ruud van Nistelrooy’s much anticipated move to Manchester United was put on hold for an entire year after rupturing the ACL in his knee. The Dutch striker’s arrival was worth the wait, though, as he hit the ground running at his new club, scoring 36 goals in all competitions in his debut season.

Van Nistelrooy followed that up with a career best 44 goals in the next campaign, establishing himself as one of the great goalscorers in European football in the process. Although his time in England ended in somewhat acrimonious circumstances with manager Alex Ferguson in 2006, his hero status was already well established by then, having won the Premier League, FA Cup and League Cup as well scoring 150 goals.

The ten best Ajax products to play in the Premier League

Some things are certain in life: death, taxes and Arjen Robben cutting in on his left foot and putting the ball in the far corner. That was the case, at least, until he retired last year after a stellar career in which he won league titles in four different countries, played in a World Cup final, and scored the winning goal in a Champions League decider.

And to think, the Dutch winger arrived at Chelsea from PSV in the summer of 2004 for just £16m. It might have been one of the best deals the south west London club will ever do, as he terrorised defences on his way to winning two Premier Leagues, an FA Cup and two League Cups.

Although Robben left English football after just three seasons, he continued to be a thorn in the side of Premier League teams in the Champions League, destroying Arsenal on many occasion and knocking Man United out of the quarter-finals in 2010. The Flying Dutchman was a prototype for the modern wide forward in the game, one whose longevity was truly magnificent to behold.

Five of the best first-touch-on-the-pitch goals ever

After eight years and 220 appearances in the Eredivisie for Feyenoord and PSV, Georginio Wijnaldum arrived to the Premier League at a later stage in his career than most Dutch prospects would usually move away from the Netherlands. And yet, he has proven himself to be a valuable player in each of the clubs he’s been at since.

Although Newcastle United were relegated the only season he was there, Wijnaldum was their best player and top goalscorer, but he was notably flashy and defensively weak for a midfielder. After moving to Liverpool, Jurgen Klopp turned him into a versatile operator who can function in a multitude of roles across midfield.

Wijnaldum doesn’t appear to do any one thing at a particularly elite level, and yet he is an integral cog in a Champions League-winning machine who are odds-on to win the Premier League title this year.

One of the hardest men to have ever featured in the Premier League, Jaap Stam was as immovable as a cement park bench while at Manchester United. The fearsome centre-back won a league title for each of the three seasons he was at Old Trafford, but was stultifyingly sold to Lazio for £15 million by Alex Ferguson in 2001.

It was reported at the time that the Scottish manager was upset by revelations Stam made in his autobiography about how his transfer was carried out, but a regrettable Ferguson later admitted that the reason was the offer was too good to refuse for a player reaching his late twenties and recovering from an Achilles injury.

It was also suggested that Ferguson partially made his decision based on statistics that showed he was making less tackles, even though it’s not a reliable indicator for defensive performance. Although his time in England should’ve lasted for much longer, the Dutch defender left for Italy with six winners medals, including a Champions League, in his back pocket and one hell of a reputation.

An energetic midfielder who served as an excellent utility player for Alex Ferguson, Park Ji-Sung announced his talent to the world in a spectacular Champions League campaign for PSV Eindhoven in 2004/05. Although they lost the semi-final to AC Milan on away goals, he scored the opening goal in a 3-1 win over the Italians at home, catching the eye of suitors in the Premier League.

The Korean adapted quickly to the English top flight and made an impact during his time there, even if he wasn’t a guaranteed starter, winning four Premier League titles, three League cups, and the Champions League. Heartbreakingly for Park, he was left out of the squad for the final against Chelsea in 2008, despite playing a key role in the semi-final against Barcelona.

Having won league titles with both PSV and Barcelona in the first half of his career, Boudewijn ‘Bolo’ Zenden arrived in the Premier League in 2001 after Chelsea paid £7.5 million for him. His time in London was frustrated by injuries, however, and he left Stamford Bridge for Middlesbrough in 2003.

It was on Teesside where he enjoyed success, winning the League Cup in his first season and scoring from the penalty spot after just seven minutes. It was Boro’s first major trophy, having finished runners-up in three finals during the nineties, which of course instantly made the Dutchman a legend at the club.

The central midfielder’s performances for the north eastern outfit earned him a move to Liverpool, but he suffered a cruciate ligament injury in his right knee halfway through his first campaign, meaning he missed their FA Cup triumph against West Ham that season.

Bolo did at least feature in the Champions League final against AC Milan in 2007 after scoring in their victorious penalty shootout against his former side Chelsea in the semi-final. Although they lost the decider in Athens, Zenden did at least mark his time at Anfield with Uefa Super Cup and Community Shield medals before leaving for Marseille. He ended his career with a two year stint at Sunderland.

While his Premier League career was a bust, Memphis Depay has gone on to prove himself as a very talented wide player since leaving Manchester United, turning out some excellent performances for Lyon in Ligue 1 and the Champions League.

The Dutch winger arrived at Old Trafford in 2015 to much fanfare, with his shirt sales being the third-highest selling in the world. He flattered to deceive, however, putting in a number of below par performances under Louis van Gaal, one of the most galling of which came against Chelsea in January 2016.

Depay lost the ball just moments after coming on as a substitute, before failing to track back, which resulted in the Blues equalising in injury time and snatching a draw. He showed flashes of brilliance every now and again, but Jose Mourinho had no time for him, handing him just four appearances in 2016/17 before shipping him out in the winter transfer window.