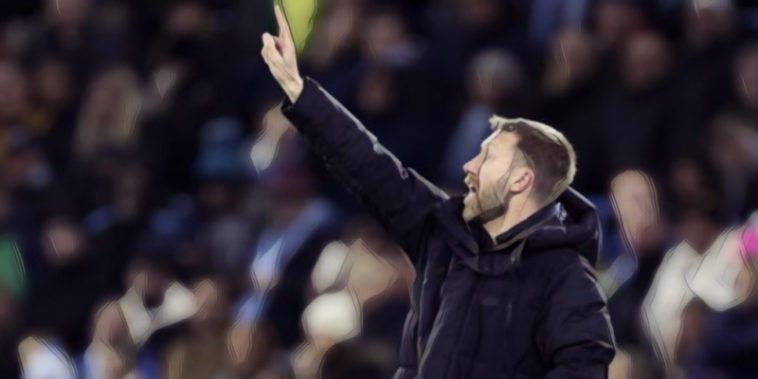 When a new manager takes charge of a club, we often expect to see instantaneous changes in the way they play. In an era where coaches are defined by their tactical style, a marker of their success becomes how clearly their particular approach can be observed in their team. When that style remains somewhat elusive and results don’t supplant the lack of discernable impact from the new boss, discontent and clamour are soon to follow.

That is the exact issue afflicting Graham Potter and Chelsea. They sit tenth in the Premier League table, and coming off a humiliating 4-0 defeat to Manchester City in the FA Cup, serious questions are being asked of whether Potter has truly made much of an impact since replacing Thomas Tuchel and if he can stem the team’s string of poor results.

What such criticism ignores, though, is that a coach can only make so much of an impact when the squad at their disposal is ill-suited to their ideas. While Tuchel and Potter have similar tactical ideas, the same issues that plagued the former are hindering the latter: Chelsea’s squad is a mess.

It’s a muddled mixture of players recruited for different coaches under different club structures and recruitment regimes, as well as a smattering of young players returning from loan from clubs with vastly different styles. A coach needs the right blend of player profiles across a squad to bring a tactical vision to life, and at Chelsea, that blend is hard to come by at best and non-existent at worst.

In every department, Potter finds players who cannot suit the demands of his highly technical, possession-based, high-pressing style of football. At goalkeeper, the Englishman demands a much larger role in build-up than his predecessor. They cannot just be comfortable enough to restart build-up when the team can’t find other options — they are an active participant in creating numerical superiority at the back.

This means Potter wants his keeper to adopt a more aggressive role in line with his defensive line, being a routine option for circulating the ball and therefore requiring extreme competency at receiving and passing with both feet and at many angles. Their long-range distribution also needs to be excellent, as Potter often implements specific rotations to lure an opposition press to create space further up the field.

In the backline, until the recent arrival of Benoit Badiashile, Chelsea lacked a natural fit for the left-sided centre-back role in a back three. Potter has also been plagued with injuries, depriving him of first-choice centre-backs and wingbacks. The decline of Cesar Azpilicueta has also worsened issues in this area, depriving Potter of the once-reliable Spaniard who could play either as a wingback or centre-back.

Pep Guardiola: “I’s say to Todd Boehly, give Graham Potter time. Give him time. All the managers need time and he is right”. 🔵 #CFC @NizaarKinsella

“At Barcelona, I didn’t need time for two seasons because I had Messi”. pic.twitter.com/iPxbJywakE

In midfield, Potter lacks balance. Connor Gallagher is a unique player who thrived at Crystal Palace as a goal-threat, off-ball runner, presser, and tackler but took very few touches of the ball. At Chelsea, who dominate the ball much more than Palace, Gallagher has to adapt his game and isn’t quite as impactful.

Mateo Kovacic is an elite ball carrier, Denis Zakaria is the only fit specialist number six, and Jorginho provides composure and progressive passing. However, their profiles and limitations make it difficult to find a strong balance between the midfielders to execute Potter’s vision. Much of the young coaches’ philosophy at Brighton stemmed from the versatility of his midfield: their ability to all contribute to an energetic press, retain possession, make smart off-ball runs, and contribute either with progressive passing or carrying.

Chelsea have players who are among the best in the world at some of these duties, but cannot perform all to a sufficient level, and no combination of their skillsets truly creates a complete midfield.

In attack, Chelsea’s plethora of talented players lacks chemistry. Either due to injuries or confidence issues, the combinations and relationships key to any successful attack are sorely lacking. That doesn’t even factor in the lack of a suitable striker. Beyond goal-scoring, Potter has historically favoured hard-working, intelligent strikers who mainly contribute with their movement and pressing. Danny Welbeck, Neal Maupay, and Ollie McBurnie at Swansea were all such options. By contrast, Pierre Emerick Aubameyang is not a dogged presser and is clearly out of form, while Kai Havertz can provide useful traits but not necessarily the ones Potter looks for in a striker.

Six defeats in the last nine 😬

How do Chelsea improve their form? 🤔#MOTD pic.twitter.com/XwHm78syqO

This is not to say Chelsea’s squad isn’t talented. It simply lacks the types of players, and crucially, a complementary set of players who can bring Potter’s tactical vision to life.

It’s worth noting that Potter took time at Brighton to find his players’ optimal roles. He took almost two seasons to shift Alexis Mac Allister from underwhelming number ten to World Cup winning deep-lying playmaker, and he similarly shifted the roles of Pascal Gross and Solly March until finding their best spot. It will take time for him to get to grips with how best to use the players at his disposal and bring his own players in.

The likes of Christopher Nkunku and Joao Felix will give him versatility and technical excellence in attack, but there is significant work to be done throughout the team. Potter is not without blame for Chelsea’s poor results, but to use it as a marker for his potential success at Chelsea ignores the scale of the task ahead of him.

Pruning the squad and moulding it in his image will be Chelsea’s key task in the coming transfer windows. If they can do that successfully, we will then be able to truly judge whether Graham Potter is fit to be Chelsea’s head coach.

Read – FA Cup Third Round Team of the Week