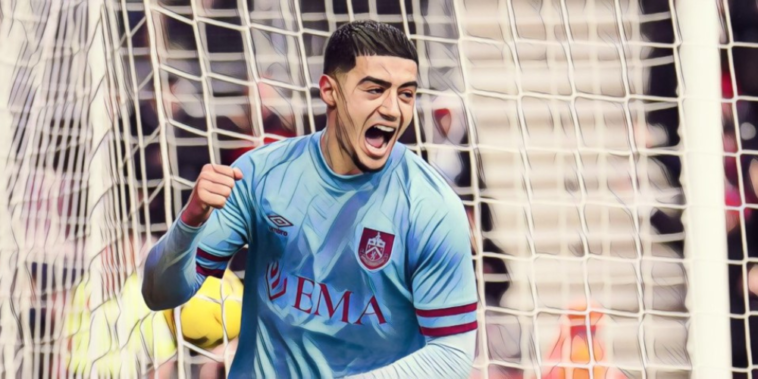 The FA Cup reached the third round this weekend and a traditional favourite of the football calendar failed to disappoint.

Stevenage secured the upset of the round after stunning Aston Villa, while Blackpool, Burnley and Sheffield Wednesday each upset the odds to knock out Premier League opposition.

Elsewhere, Manchester City piled the pressure on Graham Potter and Chelsea after thrashing the west Londoners 4-0 at the Etihad, while Manchester United maintained their fine form to ease past Everton at Old Trafford.

Following the FA Cup’s third round action, we’ve compiled our Team of the Week from the fixture’s star performers.

Sheffield Wednesday caused an upset after eliminating Newcastle at Hillsborough, becoming just the second team to beat the Magpies in all competitions this season.

Cameron Dawson produced a magnificent performance in goal for the League One side as he denied the visitors on several occasions with a series of smart saves.

Clawed away by Cameron Dawson for @swfc 🧤#EmiratesFACup pic.twitter.com/SNtPDtzwr1

The 27-year-old has been competing with David Stockdale for the club’s number one role this season, but looks to have done enough in recent weeks to have secured first-choice status. His heroics were a key factor in Wednesday’s passage to the next round.

The teenager impressed in an unfavoured right-back role as Derby progressed to the fourth round with a 3-0 win over Barnsley at Pride Park.

Rooney – the cousin of former Derby manager and Manchester United legend Wayne – was excellent on just his tenth senior appearance, producing a performance full of defensive maturity. Cool and composed, the 19-year-old appears to have a bright future with the Rams.

Great win and through to the next round 💪🏻🐏 pic.twitter.com/fK0DQSkJ7m

Mark McGuiness looks unlikely to feature in a Sheffield Wednesday shirt again, but what could be the centre-back’s final outing in the club’s colours proved to be a memorable one.

McGuiness was a man-mountain in the Owls’ win over Newcastle, as he produced a commanding  defensive display to frustrate the Premier League side. He won each of his five aerial duels and made a staggering 14 clearances, as the third-tier promotion hopefuls progressed to the fourth round.

Cardiff have opted to recall the centre-back from his loan spell at Hillsborough and McGuiness is set to be a major miss to Wednesday’s promotion challenge. On this evidence, the ex-Arsenal youngster is already ready for a step up – or two – in level.

A crucial contribution at both ends from Marvin Ekpiteta as Blackpool ran riot to dump out Nottingham Forest.

The Seasiders stunned their Premier League opponents with an impressive performance, one which was kick-started as Ekpiteta swept home the opening goal from close range.

The central defender – who manager Michael Appleton believes has benefitted from being removed as captain – then made a number of vital interventions in the second half, including a brilliant last-ditch block to deny Emmanuel Dennis.

It was the kind of result and performance that could lead to an upturn in fortunes for Blackpool, who are nine games without a win and struggling in the Championship.

Layvin Kurzawa has struggled for opportunities since signing on loan for Fulham last summer, but the left-back made his first appearance since October in the club’s 2-0 win at Hull.

It was an encouraging showing from the Paris Saint-Germain loanee who demonstrated his threat when venturing into the final third. He opened the scoring with a poacher’s effort after turning in a rebound and fired in four dangerous balls into the box.

The best of those resulted in a chance for Harry Wilson and Marco Silva was full of praise for Kurzawa’s contribution at full-time.

“On the ball, he’s a top, top player,” Silva said. “It’s not something new — where he played before in his career speaks for itself. The last two seasons have been difficult for him, but he is a very good player. He always gives us quality in the build-up and final third as well.”

West Ham returned to winning ways this weekend and booked their place in the fourth round with a 1-0 win at Brentford.

Declan Rice has come in for some unfair criticism during West Ham’s recent poor form, but provided a reminder of his class against the Bees. An impressive performer despite defeat to Brentford in the Premier League last month, the midfielder was crucial to West Ham emerging on the right side of the result this time around.

The England international regained possession on nine occasions and made four clearances, while his crunching challenge on Yoanne Wissa resulted in the assist for Said Benrahma’s winner.

Brighton’s World Cup winner returned with a performance which underlined his class and one which might just increase the growing speculation surrounding his future.

A January afternoon in Middlesbrough might be some contrast to the World Cup final, but Mac Allister ensured he came back down to earth with a fine performance at the Riverside. On as a substitute at half-time, he helped Brighton take the game away from the Championship promotion hopefuls with two goals.

His first was an audacious back-heel past Zack Steffen, before timing his run to perfection to meet Pascal Gross’ cross and slide in his second.

The manner that the Seagulls swept aside Michael Carrick’s Middlesbrough – who entered the fixture with six wins in their last seven Championship games – was an example of how far they’ve come in recent seasons. Roberto De Zerbi’s side should have real ambitions of reaching the latter rounds.

Stevenage struck two late goals to claim the upset of the third round, as the League Two side came from behind to win at Aston Villa.

Dean Campbell’s introduction from the bench helped turn the tie in Stevenage’s favour, as the on-loan Aberdeen midfielder brought his side back into the game. Campbell won a penalty after he stole possession from Leander Dendoncker in a dangerous area, with the Belgium international hauling the Stevenage star down in the box.

Moments later, he scored a famous winner for the visitors as he collected a short corner and fired inside Robin Olsen’s near post. Villa were caught sleeping as Campbell lashed in to send Steve Evans’ side into the draw for the fourth round.

After a slow start to the season, Mahrez appears to be cooking again, with the 31-year-old the best player on the pitch as Manchester City thrashed Chelsea at the Etihad.

He opened the scoring with a fantastic free-kick that left Kepa Arrizabalaga with no chance, before putting the finishing touch on a 4-0 win with an emphatic effort from the penalty spot.

In between, there were the signature velvet touches and sharp shifts of direction, as the Algerian enjoyed the freedom of the right wing against a Chelsea team who couldn’t cope with City’s forward threat.

Riyad Mahrez has played against Chelsea three times this season and scored every single time 🤫 pic.twitter.com/hLcbYPBQih

It’s now four goals in three games against Chelsea this season, who must surely be sick of the sight of him.

Vincent Kompany has transformed Burnley into a wonderfully watchable side and the Championship leaders maintained their momentum with a 4-2 win over Bournemouth.

It’s now 11 wins in 13 games for Burnley, who passed their Premier League test against the Cherries with flying colours. Anass Zaroury continued his impressive debut campaign with the Clarets, as he scored twice in a performance brimming with confidence.

His second was a brilliant goal full of invention, persistence and a clinical touch, as the Moroccan moved to nine goals for the campaign.

Signed from Charleroi for a fee of just £3.5m, Kompany’s Belgian connections appear to have unearthed a gem. The 22-year-old appears Premier League bound and on current form that should be in the colours of the Clarets.

The forward was a menacing threat all evening as Everton struggled to deal with his movement. He skipped past Ben Godfrey to set up Antony for the opening goal, before beating Seamus Coleman near the byline to force an own goal from another low cross.

Seven goals in his last seven games at Old Trafford.

Marcus Rashford is back 👏 pic.twitter.com/3tV3vqdL5X

His stoppage-time penalty sealed another impressive performance from the 25-year-old, who has four goals and two assists in four games since the season’s restart.