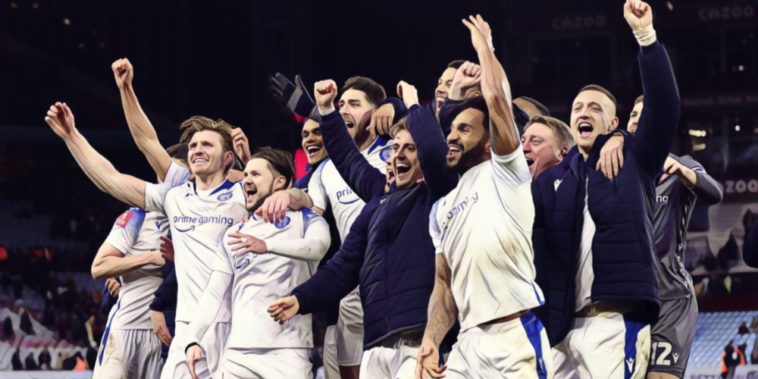 Our FA Cup awards honour the best – and worst – of the third round action from the weekend.

The magic of the FA Cup is alive and well.

Premier League fans might not view the competition with the same fixation as previous decades, but this weekend’s third round upsets ensured the FA Cup remains compelling viewing.

Sheffield Wednesday, Burnley and Blackpool all took top-flight scalps, while non-league Wrexham – backed by their celebrity investors – edged second-tier Coventry in a thriller worthy of a Hollywood script.

However, the greatest ‘cupset’ came at Villa Park. Aston Villa appeared to be heading into the fourth round after taking the lead against Stevenage, only for the fourth-tier team to turn the game on its head late on.

WOULD YOU BELIEVE IT!? 😮@StevenageFC have come from behind in the final few minutes. Surely they've won it? 🤯🤯🤯#EmiratesFACup pic.twitter.com/bfa5QuIFWr

Dean Campbell’s introduction off the bench helped turn the tide, as Stevenage scored twice late on to snatch a famous win. The midfielder won the penalty for an 88th-minute equaliser, before lashing home a stoppage-time winner to send the 3,000 travelling Stevenage fans into pandemonium.

It is the first time in almost a decade that Stevenage have reached the fourth round, doing so after beating a team 59 places above them in English football’s pecking order.

The @StevenageFC players are definitely going to enjoy this win 🎉#EmiratesFACuppic.twitter.com/2CUSMOZbqG

Burnley are riding a wave of momentum right now, with Vincent Kompany’s Clarets on a charge back towards the Premier League.

It’s now 11 wins in 13 games for Burnley, who passed a test of their Premier League credentials by dumping out top-flight Bournemouth in the third round.

Anass Zaroury was the star of the show as the Championship leaders won 4-2 on the South Coast, with the Moroccan winger scoring twice for the visitors.

Cupset for the Cherries as we progress to the fourth round 🏆@EmiratesFACup | #EMA pic.twitter.com/ItHdAghpRt

The 22-year-old scored his first as Josh Brownhill unselfishly squared for Zaroury to tap into an empty net, before the summer signing scored a superb second as he showed fine footwork and determination to work a shooting chance in the box. The execution was brilliant, as his finish nestled into the far corner.

Kompany’s knowledge of the Belgian market has allowed him to build a side who look hell-bent on returning to the top division. Burnley are watchable and exciting, with Zaroury epitomising the shift in style. He appears a gem.

Chelsea must be sick of the sight of Riyad Mahrez.

In three games against the Blues this season the Manchester City winger has scored four goals, including two in this weekend’s FA Cup encounter at the Etihad.

Mahrez opened the scoring as City routed Chelsea to up the pressure on Graham Potter, with a free-kick that was postage-stamped to the top corner.

Magic from Mahrez 🪄@Mahrez22 with an unbelievable free-kick for @ManCity 😳#EmiratesFACup pic.twitter.com/UlirKf9lnL

Cardiff and Leeds played out an enthralling fixture in South Wales this weekend, as the two rivals went head-to-head in a classic cup contest.

It was a fixture that featured four goals, late drama, a red card and penalty save, while Leeds were guilty of squandering the game’s best chances.

Pascal Strujik missed a glorious chance as he headed wide when unmarked inside the six-yard box, with the defender appearing to lose the flight of the ball as he glanced past the far post.

Rodrigo then wasted an even better opportunity, as his poor penalty was beaten away by Jak Alnwick. Fortunately for the duo, 18-year-old Sonny Perkins spared their blushes with a 95th-minute equaliser as Leeds came from two goals down to rescue a replay.

Does opportunity await a non-Premier League team this season?

Eight top tier teams have already already been eliminated, while another will follow suit next week as Wolves face Liverpool in a replay at Molineux.

8 – Eight Premier League clubs have been knocked out of the 2022-23 FA Cup third round. This is the most top-flight sides to go out at this stage since 2007-08 (9), which was the last season to see a side from outside the Premier League reach the final (Cardiff). Opportunity. pic.twitter.com/totuUl2Dpc

Wrexham produced one of the results of the weekend, as the non-league side won a seven-goal thriller at Championship Coventry City.

The Welsh outfit have had quite the scrutiny on them since their celebrity-backed takeover, with Canadian co-owner Ryan Reynolds left more than a little impressed with their 4-3 win.

I’m completely and totally speechless. What a club. What a town. What a win. @Wrexham_AFC forever. https://t.co/9SzQUAVAX2

Wrexham will compete in the FA Cup’s fourth round for the first since the 1998/99 season, while it is the first time a non-league team has scored four goals against opposition from the top two tiers since 1991.

A script you couldn’t write, not even in Hollywood.

4 – Wrexham's 4-3 win over Coventry City in the FA Cup third round was the first time a non-league team had scored four goals against a side from the top-two tiers of English football in the FA Cup since Woking won 4-2 against West Bromwich Albion in January 1991. Hollywood. pic.twitter.com/t6Fi8dsSEC

Liverpool are not at the races right now and needed more than a little luck to remain in the FA Cup this weekend.

Wolves were unfortunate not to escape from Anfield with a win, with the two teams set to replay for a place in the fourth round next week.

Alisson has been Liverpool’s most consistent performer so far this season, but the Brazilian will want to forget his role in this weekend’s draw and quickly. The goalkeeper made a calamitous error for the first goal and should have done better with Wolves’ second, on a disastrous day for the 30-year-old.

The first goal came as Alisson somehow picked out Wolves’ Goncalo Guedes with a loose pass, appearing not to see the gold-shirted striker right in front of him.

The problems are beginning to mount up for Jurgen Klopp.