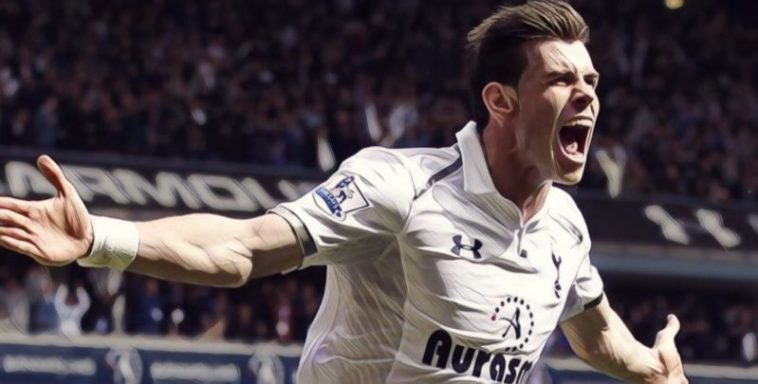 Gareth Bale has called time on his career, announcing his retirement from football with immediate effect.

Whilst the Welshman’s fortunes may have stalled somewhat in recent seasons, Bale departs the game as one of the best and most decorated British footballers of all time.

After an exciting emergence at Southampton, he signed for Tottenham and after a rocky start announced his arrival as a global superstar. His performances were of such a level that Real Madrid made Bale their latest Galactico and the world’s most expensive player in 2013.

The Gareth Bale seen in his final days as a Spurs player was a unique proposition, his near peerless athleticism making him one of the most exciting talents the Premier League has witnessed.

We’ve decided to revisit Bale’s final, glorious, season in English football, the Welsh wonder at his rampaging and destructive best:

Enjoy 5️⃣ of his best goals in a Spurs shirt… ? #COYS pic.twitter.com/egHetVkNK5

Bale may have scored over a century of goals in the colours of Real Madrid, but the 2012/13 season remains the finest goalscoring campaign of his career, both for league goals and in all competitions.

Only Robin van Persie and Luis Suarez scored more in the Premier League than the Spurs star, as Bale hit 21 league goals for the north London side – the only time he reached the 20-goal landmark.

After flashes of brilliance during the opening months of the season, including a scintillating run and finish at Old Trafford, Bale burst into life after the New Year, scoring 12 goals in 14 appearances with all but one altering the final result.

Stunning solo runs, fine free-kicks and delightful dipping efforts from distance, there really seemed to be no type of goal off limits to Bale at his brilliant best, his tally three more than Cristiano Ronaldo managed during his final season in the Premier League before moving to the Bernabeu.

Bale’s goals came at an average of 139 minutes-per-goal, whilst his tally was a huge 33% of all of Tottenham’s league goals scored throughout the campaign and added 24 points to the club’s total.

If Bale’s tally of 21 league goals was not impressive enough, almost half of those strikes came from outside of the penalty area.

The winger’s tally of nine goals from distance accounted for 42.8% of his overall goals, whilst it was also the most any player has ever scored in a single campaign in the history of the Premier League.

The Welshman’s repertoire of rockets included stunning efforts against West Ham and Sunderland and is a feat no player has matched before or since, Jimmy Floyd Hasselbaink (1998/99) and Matt Le Tissier (1994/95) the next best on eight apiece.

Bale’s record of nine goals outside the box was also the highest figure amongst Europe’s top five leagues that season, two ahead of Lionel Messi and three clear of both Gokhan Inler and Hernanes.

Gareth Bale has scored more goals from outside the box in a single Premier League season (9) than any other player has ever managed.

That 2012-13 campaign really was ridiculous. 🚀 pic.twitter.com/JmEBcNzWxq

Modern football fans can often get hung up on statistical output given the endless amount of data now easily accessible, with many a pub argument referring back to numbers.

In truth, summarising Bale’s season based simply on statistics would be doing a huge disservice to a wonderful campaign, in which the winger seemed near untouchable when operating at full flight.

The Welshman’s blistering speed of foot had many a Premier League defender seemingly heavy-legged, exploding past opponents in effortless fashion to create chance after chance for his grateful Tottenham teammates.

He was, to be frank, freakishly fast.

??????? Gareth Bale’s performance in 2010 against Inter Milan in the Champions League was iconic. He absolutely destroyed Maicon and ended his career during that tie. ? pic.twitter.com/Y9Ao41khON

Bale completed 59 take-ons throughout the season as he drifted from a left-ring role to supporting forward, whilst creating 75 chances with his pinpoint delivery from a – to excuse an overused term – wand of a left foot.

His four league assists also added to a haul of 37 goal contributions in all competitions (26 goals, 11 assists), the third-highest total of any player in the Premier League, behind only Robin van Persie (39) and Juan Mata (49).

Footballer of the Year

Bale’s defining season was built upon him extracting the most from his natural talents, his sheer force of will to fly past overwhelmed opponents dragging a mediocre Spurs side forward despite a lack of leadership under Andre Villas-Boas.

Simply devastating throughout much of the campaign, Bale’s season was one of a player at his very best and oozing the confidence that comes with outshining his Premier League peers.

The acknowledgement of Bale as the Premier League’s finest player was his second in three seasons, whilst he became just the third player to simultaneously hold both the senior and young player awards after Andy Gray and Cristiano Ronaldo.

Tottenham’s absence from Europe’s elite meant the inevitable came as Bale headed to Madrid in a world-record deal, and whilst his flame flickered brightly during his career with Los Blancos, the Bale that will be remembered most fondly upon his retirement is the one who starred during a sensational 2013/13 campaign.