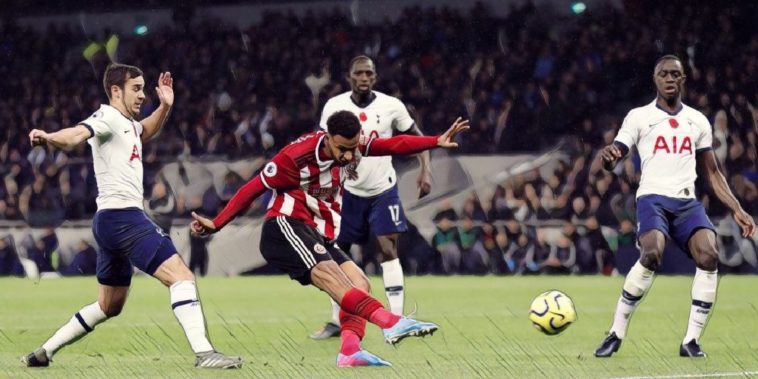 Mauricio Pochettino had said yesterday that he hoped the 4-0 midweek win against Red Star in the Champions League could be a turning point for his struggling side, but Spurs produced another turgid display during the goalless first-half, with Chris Wilder’s Sheffield United much the better side.

Spurs did take the lead though with Son Heung-Min following up his double in Belgrade with a decent finish from the centre of the area.

Any hopes Spurs fans had of their side kicking on quickly disappeared though with the Blades continuing to have the better of the play, and they had seemed to equalise via David McGoldrick, only to see VAR once again controversially disallowing a goal for a marginal offside call.

The newly-promoted side would though find a much deserved leveller on 78 minutes when George Baldock’s cross from the right evaded everyone and nestled into the bottom corner.

Spurs have won just three of their 12 Premier League games this season and speaking afterwards French midfielder Moussa Sissoko admitted his side are struggling, but insisted it is not for a lack of effort.

“We are struggling since the beginning of the season. Why? I don’t know, because we are trying our best, but it’s not working. We see today it was a difficult game against a good team,” Sissoko told Sky Sports.

“We couldn’t keep the score, so we have a lot of frustration, but we need to keep going. We have to stick together and try to work hard and come back stronger. That is the only way to perform.

“Every team can have difficult moments. Since a few weeks we are struggling and that’s football. What can you do? Keep working, give your best every day ’til eveyrthing turns around.

Tottenham Hotspur have taken just 25 points from the last 24 matches in the Premier League.

Along with winning only 3 of their last 12 domestic games under Spurs boss Mauricio Pochettino.#THFC #COYS pic.twitter.com/ep1tdGGW2M

“We know we have a good squad with a lot of quality. We know we can do better and have to do better. Hopefully we’ll go away, have some wins with our national teams, and this will give us confidence. The season is still long, in the Champions League we are doing well.”

Spurs are in 12th place in the table after today’s result, while newly-promoted Sheffield United move up to fifth.