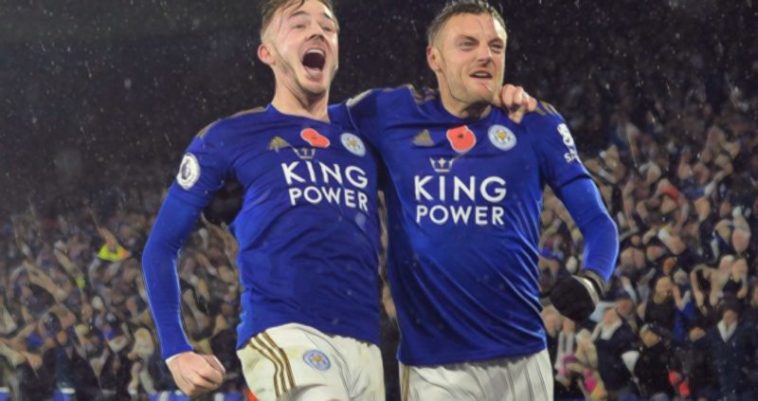 Despite playing with three centre-backs and getting all eleven men behind the ball when the Foxes had possession Arsenal looked far from solid, though they did look dangerous on the break with their front three of Mesut Ozil, Alexandre Lacazette and Pierre-Emerick Aubameyang.

While it was an open and entertaining first 45 minutes of football, neither side could make the breakthrough, with Jamie Vardy and Lacazette, going closest for their respective sides.

Leicester midfielder Wilfred Ndidi was handed a great chance to open the scoring just after the break, but the Nigerian international hit the bar from 10 yards out, before Arsenal had a tidy finish by skipper Aubameyang ruled out by VAR for offside.

Brendan Rodgers side did finally get their goal on 67 minutes though, talisman Jamie Vardy finishing off a wonderfully slick team move, before James Maddison fired a superb low drive into the corner of Bernd Leno’s net from the edge of the box with just 15 minutes left on the clock.

Speaking after the game experienced Leicester ‘keeper Schmeichel admitted his side have built great momentum over the first 12 games of the season, and refused to put a limit on how far they can go.

“Momentum is such an important thing in football. We’ve had a good start to the season,” Schmeichel told Sky Sports.

“I felt we were quite solid and I was quite confident with Vards up top and the boys behind him we’d do something.

“For us it’s been about enjoying doing what we’re doing and basically coming out and showing all the talent we have which is huge really.

“We’ve had success at this club before by taking it one game at a time, so who knows.”

Today’s win sees Leicester move up to second in the Premier League table, while Arsenal slip to sixth.