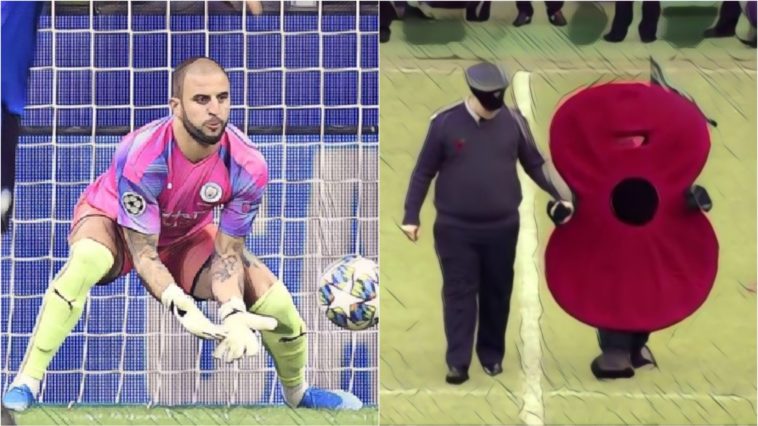 The best and funniest tweets of the week from the world of football, featuring Kyle Walker’s cameo as a goalkeeper, the Banter Era in full swing at Arsenal, Kepa joins the memes club and the remembrance poppy jumps the shark.

Man City vs Atalanta treated us to the greatest joy football can offer – a outfielder in net.

Made more saves than Claudio Bravo too. Worth every penny, if you ask me.

At least he can always say he has a 100% record between the sticks.

Think Kyle Walker is the first English goalkeeper to make a save in the Champions League since Ben Hamer in Porto 5-0 Leicester in 2016.

Five of the Best – Outfield Players in Goal

But now is not the time for jokes. It’s time to honour our fallen soldiers with [checks notes] an anthropomorphic poppy mascot.

Michy Batshuayi was super supportive of teammate Kepa after the goalkeeper scored an own goal with his face.

Imagine fluffing your lines just as you’re about to score the greatest goal ever.

The real reason behind Arsenal playing their Europa League tie on a Wednesday afternoon.

Respect to UEFA for scheduling the Arsenal game as a tribute to Unai Emery. pic.twitter.com/bqRsxUmvrI

Narrator: The Banter Era was not over.

Helping your mum back into a parking space pic.twitter.com/JvOoSHV34d

So glad we got our priorities straightened out and sorted the League Cup quarter-final.

ridiculous that liverpool should have to play a league cup tie 24 hours before a game in qatar, the slave state where migrant workers are roasting to death. utterly furious at… [checks notes] the fixture calendar for allowing this to happen

Villa players in the tunnel when we play Liverpool in the Carabao Cup #avfc #lfc pic.twitter.com/7IDipmqLhA

Okay, this is pretty good.

Wolves’ Adama Traoré has decided to play for Mali, switching over from Spain.

Read: Five of the Premier League’s most notorious divers ever